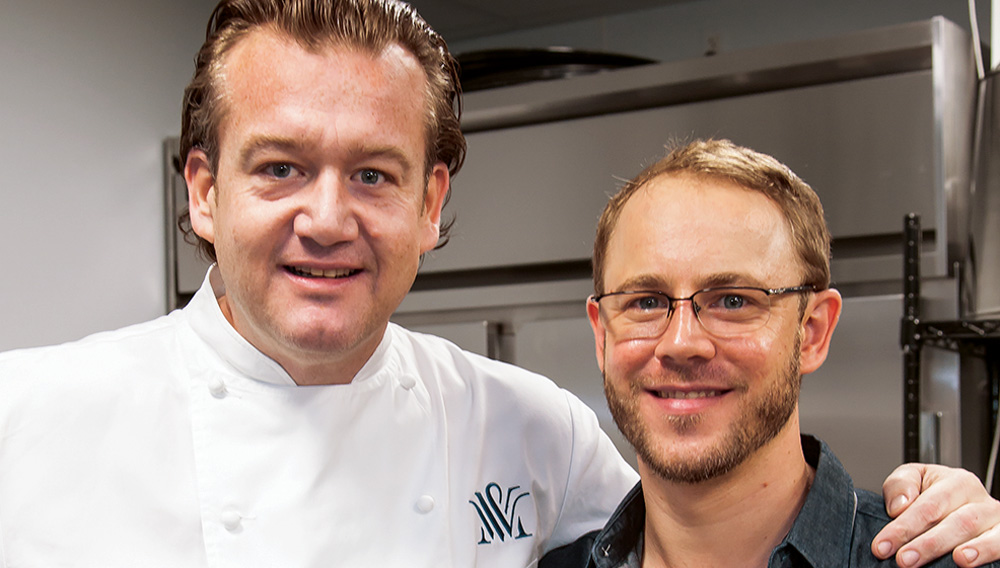 When John Becker flew to New York City for his Culinary Masters Competition dinner, he packed four big boxes with California ingredients: Fuyu persimmons, matsutake mushrooms, Brussels sprouts from Half Moon Bay, Mendocino nori, and turnips still clumped with Santa Cruz soil. As the chef de cuisine at the Progress in San Francisco, Becker is particular about the site-specific nuances of his raw materials. But he is also a master of classical technique, having worked in the Manhattan kitchens of such culinary superstars as Alain Ducasse (Essex House), Pierre Schaedelin (Le Cirque), and Michael White (Ai Fiori).

White, a Wisconsin native who discovered he has a sublime touch with pasta, is the chef and proprietor of some of New York’s most acclaimed Italian restaurants, including Marea, Costata, and Osteria Morini. When he opened Ai Fiori in 2010, he hired Becker as his sous chef. “We always try to build a team of people who each bring something different to the table, and a lead person—a nucleus—within the group,” White said. “John was that person.” Becker, who was soon overseeing a number of White’s restaurants, later became the opening chef at White’s Chop Shop in London. By the time Robb Report approached White about nominating an up-and-coming chef from New York City to participate in the Culinary Masters Competition, Becker had departed to the West Coast; nevertheless, his former mentor still considers him the most formidable new talent to come out of the Big Apple in recent years.

In San Francisco, Becker found a new freedom at the helm of his own kitchen, unfettered by the idioms of French or Italian cuisine. His creativity was encouraged by the Progress’s owners and executive chefs, Stuart Brioza and Nicole Krasinski, who first made waves with the dim-sum-style menu at their restaurant State Bird Provisions. At the Progress, dishes such as Treasure Chest Soup—a wild combination of, among other things, fermented Thai sausage, trout quenelles, kimchi, and rice dumplings in a rich pork broth—are served banquet style, with the entire table sharing each platter. In February, the San Francisco Chronicle awarded the eatery three stars.

For his Culinary Masters Competition dinner—served at New York’s Langham Place—Becker drew inspiration from pivotal experiences on both the East and West Coasts: A lobster salad tinged with pickled lime and vadouvan, for example, represented his year in California, while sauerkraut agnolotti with smoked sablefish recalled New York’s famous appetizing shop, Russ & Daughters.

Given his restless curiosity and fondness for experiments, we were not especially surprised when, a few weeks after the dinner, Becker telephoned to say he was leaving the Progress to travel and reflect, starting in Tokyo. “At this point,” he said, “I’m really opening my mind up to the whole world.”

John Becker began preparing his top-scoring first course nine months before the competition, when he pickled Bearss limes with fresh turmeric, ginger, and “tons” of other spices. The pickled limes added a bright, mysterious flavor to a light dressing made with yogurt and aioli—a subtle supporting player for a salad of tender lobster, juicy slices of fresh young coconut, and crisp heart of palm, which had been harvested in Hawaii just three days before. A scattering of toasted pistachio vadouvan—made with sweet Sicilian pistachios, shallots, curry, fresh Hawaiian nutmeg, and other spices—tied all of the elements together. “When you hear about all of these flavors, it sounds a little far-fetched,” Becker says. “But I think it came out real nicely.”  —M.B.

Michael White: John is ingredient savvy—always looking for new ones. And being from California, he knows good ingredients. Then he came to New York and had a great experience working at the Essex House with Alain Ducasse and also had good French training at Le Cirque. He was a great fit for Ai Fiori.

John Becker: My background was primarily European restaurants, and coming back to California, it’s been super influential—though my cooking is a world away from where it was a year ago. There are kind of no rules with the way we cook at the Progress. I’ve had the freedom to work with products I’ve never worked with before, and also techniques and ideas and flavor combinations that don’t always fit a European-style restaurant. It’s a no-holds-barred kind of cooking that’s opened my eyes to a whole world of food that I haven’t cooked in a restaurant setting.

MW: It’s his first time officially running a kitchen—his name is on the ticker tape, which is pretty exciting for a chef. It’s everybody’s dream to get the main gig, and he was definitely ready for it.

JB: When you look at our menu at the Progress, it can be a little bit all over the place. But when you eat there, there’s definitely a common thread that goes through every item on the menu. There is a voice that speaks through everything. We’re trying to do soulful, delicious, thoughtful food. Other than that, we are trying to be progressive, to move food forward, to move our ideas forward, with the kitchen as kind of a workshop.

MW: Cooking is method and technique. Once you learn the method and technique—whether it be French or Italian, those are the baseline—once you have those under your belt, you can really move how you want. There are lots of great people who can execute. There are very few who can put things together and have it sing.

JB: The matsutake dish on my competition menu started because I wanted to do a vegetarian dish, and matsutakes made sense because they’re in season, and they’re my favorite mushroom. The aroma is so unique—there’s a pine element to it—and I love the dense texture of them cooked, and I think they’re equally delicious raw. For this dish, they were roasted in butter, and we also had some shaved raw on top. The sake-lees brown-butter sauce was made with sake lees from a distillery in Berkeley, and there was also a little bit of yuzu juice and brown butter instead of whole butter. This sauce took the idea of a beurre blanc, a white-wine butter sauce, and kind of twisted everything a little bit, made it a little bit deeper and darker. The mushrooms were from Northern California, near the Oregon border; the Brussels sprouts were from the town I grew up in, Half Moon Bay; and the braised nori was from Mendocino, just an hour north. So it was also about me connecting to all these ingredients in California—super regional, but the flavors were also pretty Japanese.

JB: The sauerkraut-agnolotti course was inspired by my time in New York, but really it came from Russ & Daughters. The whole thing started with their smoked sablefish—just beautifully smoked sablefish and a goat cream cheese. I found that to be so peculiar, sort of breaking the rules, but just so delicious. I served the agnolotti with whipped potatoes with goat Robiola, an Italian, textured, creamy cheese with a tang. But I used the goat cheese in the way you’d use fish sauce—a strong flavor used in a small amount to add depth. Then we just found some beautiful black cod and cured it and smoked it and cooked it very slowly. And I had to do pasta, because I’m just such a fan of pasta, and Michael was there. But the agnolotti were really inspired by pierogies. They were filled with potato, crème fraiche, sauerkraut, and onions. We cooked the sauerkraut in a little butter to mellow it out. Never in Italian food would you see potato-filled pasta!

MW: When I started cooking at Spiaggia in 1991, nobody knew what risotto was. Nobody knew what porcini mushrooms were. I was putting Parmigiano in and whipping it with butter and calling it risotto. Now everybody makes risotto at home. It’s amazing what’s happened in 20 years. Can you imagine 20 years from now?