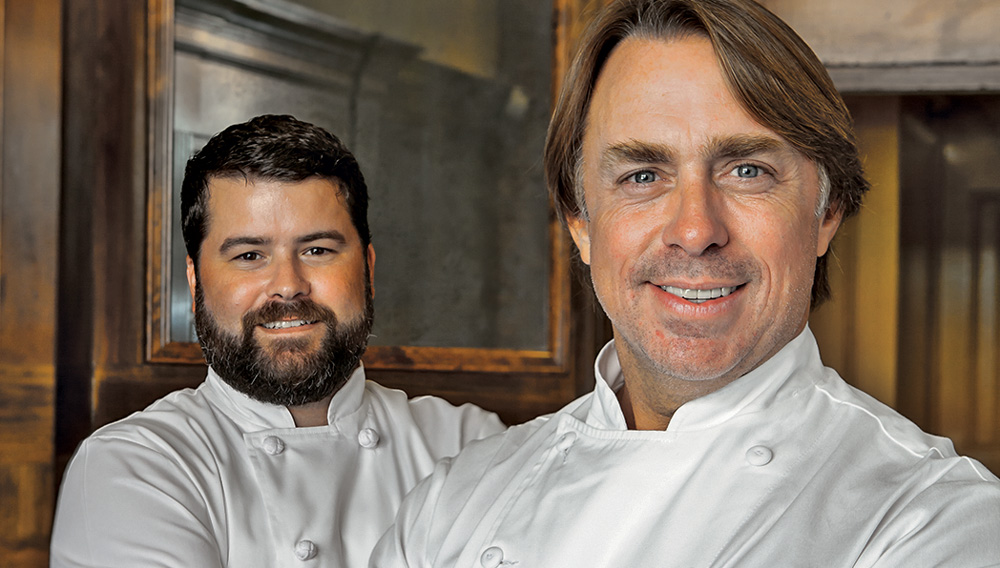 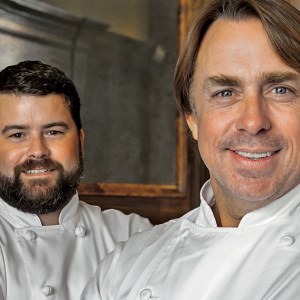 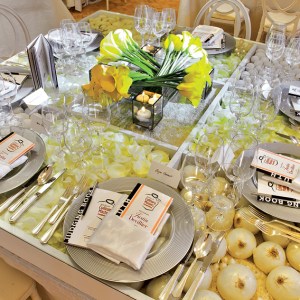 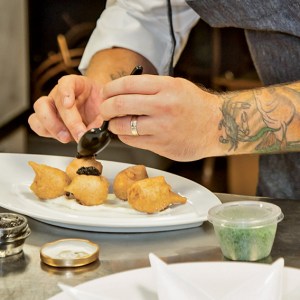 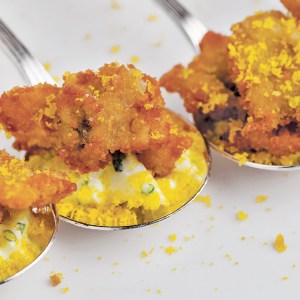 For John Besh, the rich legacy of New Orleans cuisine is at home in the talented hands of Justin Devillier.

Merle Haggard tunes were pouring out of the radio and sticks of fragrant, funky andouille—smoked just days before in LaPlace, La.—were in need of chopping. Justin Devillier picked up his knife, a burl-handled beauty made by the South Carolina bladesmith Quintin Middleton, and got to work. Beverly Hills traffic may have been purring just beyond the kitchen doors, but Devillier was steeped in the South as he prepared his Robb Report Culinary Masters Competition dinner at the Beverly Wilshire hotel.

Devillier, chef and owner of the restaurants La Petite Grocery and Balise in New Orleans, was nominated as the region’s best up-and-coming chef by none other than John Besh, a New Orleans native and the de facto ambassador for the city and its cuisine. “Justin pays a lot of respect to our heritage, but at the same time, his cooking is lighter, fresher, bolder,” said Besh, who dines at Balise at least twice a month. “And he has a very clever way with the local ingredients.”

This compliment is all the more impressive in light of the fact that Devillier grew up on the beaches of Southern California. But his family has Louisiana roots going back to the 1700s, and summers spent with relatives in Opelousas were his first experiences with serious cooks. “A big part of enjoying life meant eating delicious food,” he recalled. “Free time was spent cooking—lots of rice and grits and smothered pork chops. They hunted wild game—rabbit, duck, deer. Shrimp too, of course, and catfish. And there was a lot of smoked food, especially in the summer.”

So many of these elements now figure in Devillier’s own cooking, but with the polish and creativity that come from working in top New Orleans restaurants since 2003 and taking over the stoves at La Petite Grocery in 2007. Devillier’s competition dinner included many of the dishes that have earned him glowing reviews and James Beard Foundation nominations, such as fluffy beignets stuffed with crabmeat; an elegant salad of chilled Gulf shrimp with lemon, tarragon, and hearts of palm; tender mezzelune filled with uni and lavished with that exquisitely smoky andouille, sweet corn, and truffles; and roasted Mississippi rabbit with country ham, grilled cabbage, and green-tomato jam.

“He’s made New Orleans his home in the worst of times,” Besh said, referring to Devillier’s decision to stay and help rebuild the city after Hurricane Katrina in 2005. “He took over a beautiful restaurant, an existing restaurant, but he just took it to a new level.” For Besh, this commitment puts Devillier in the company of seasoned chefs who have continually reinvented the city’s French Creole and Cajun cooking—including Paul Prudhomme, Emeril Lagasse, Susan Spicer, and Besh himself—as well as a handful of his talented contemporaries, such as Scott Boswell and Donald Link. “This is the beautiful thing about working in such a great tradition,” Besh said. “That song is being passed from generation to generation, and you know that the next generation is going to do a pretty good job with it.”

The final course on Justin Devillier’s competition menu—a gossamer panna cotta infused with the floral notes of grilled fig leaves—drew the highest scores from Robb Report judges. Devillier served it embellished with only a tiny scoop of intense, jammy huckleberry sorbet and a scattering of salty-sweet toasted hazelnut praline. Who would have guessed his sophisticated finale was inspired by the simple pleasures of peanut butter and jelly?

John Besh: I want to talk about those crabmeat beignets. Mind-blowing. This is something that we both grew up with. We have a lot of fritters in our culture—we love puffy little fried nuggets of goodness. These were stuffed with crab and pillowy and light and airy, and right on top there was a little choupique roe. Or paddlefish roe?

JB: OK, so American sturgeon, right on top of that. Salty, briny caviar meets crisp, fluffy, airy-light fritter. And the perfume—so sweet with crabmeat. That was just the perfect way to start off a meal.

JD: It’s such a better experience to have one little bite of those while you’re getting ready for dinner and sipping cocktails than it is to have a bowl of them in front of you.

JD: People ask for bowls of them all the time. I think it’s nicer to eat with a cocktail, like the other hors d’oeuvres—say, the duck tasso with Vietnamese pickled vegetables and a fish-sauce condiment, nuoc cham. I like to combine Louisiana-style ham with the Vietnamese flavors that are so prevalent in New Orleans today and pay homage to both cultures colliding.

JB: That’s right up my alley. Again, these are flavors that really scream home to us. That’s exactly why these two little bites exemplify why I wanted you to represent the region. You’re taking these flavors that are so comfortable and traditional for us, and you’re showcasing them in a new way that’s fun, whimsical, and not too precious. I love that you have the flavors of a banh mi and a tasso and this spicy duck all wrapped together.

JD: The last hors d’oeuvre was the panéed Gulf oyster. Usually in the classic New Orleans restaurants, you’ll see panéed veal or that type of thing, breaded and pan-fried in butter like little cutlets. I downsized it to one bite using an oyster—a really nice little crispy oyster—with a little spicy quail-egg salad and some bright, fresh brininess from gulf bottarga.

JB: Another great use of what we have locally, prepared in a manner that is whimsical and fun. The perfect little bite of the Gulf Coast.

JD: I consider the entire gulf our locale, and I like to support the fishermen. It’s our water, and we try to keep it rich and clean and support it by using things like the Florida bottarga [made by Bemis & James], which comes out of the central Florida Gulf Coast. You had guys there who were fishing mullet and selling all the roe to Italians. Then they figured out what was going on: The Italians were curing it and selling it for $90 a pound. These fisher­men in Florida, a lightbulb goes off in their head—

JD: The mullet roe was going to Italy, getting cured and getting sent back to chefs in New York and Chicago and L.A. and New Orleans and all over. They decided to do it locally, and now they’ve nailed it. Their bottarga is soft, luscious, crumbly, bright orange—a little bit fresher in texture than the Italian stuff but equally as pun­gent and briny.

JB: It really exemplifies modern American cooking. It’s not about who can produce the most precious food; it’s about understanding that how we purchase and what we purchase and how we prepare it does have an impact on those around us. That’s where Justin, again, is leading the charge. He’s chosen a place, and he speaks to it, he cooks of it, he honors it—but at the same time, he’s helping to sustain that beautiful culture.

I think New Orleans is not only the soul of the South but the culinary soul of our country. Before the storm, we took that for granted. Now we take nothing for granted. We realize every day’s a gift. Likewise, when we’re cooking, I see us cooking with our whole heart—as a city, I see it. I see better po’boys today than we had 10 years ago, believe it or not. I think we’re much more passionate about the culture, which is good, because the young chefs coming up will sustain our culture. But I also think we’ve done a great job of maintaining our old standards—just within six or eight blocks of my restaurant August, we have at least half a dozen restaurants over 100 years old. Tell me in what other city you will find that. It’s crazy to see the depth of richness we have in these old standouts, and it’s awesome to see young chefs like Justin rising up and doing great things with the very same ingredients.