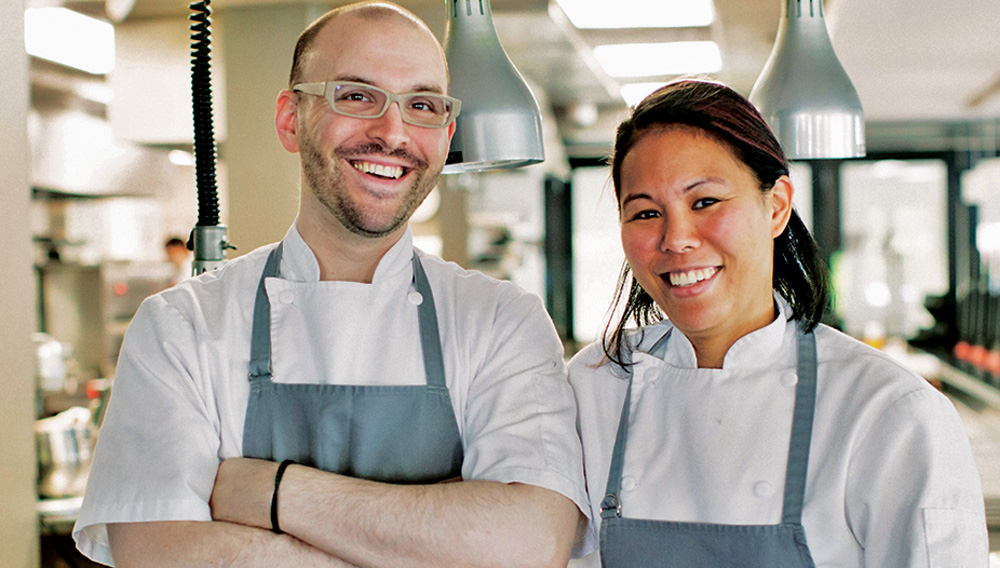 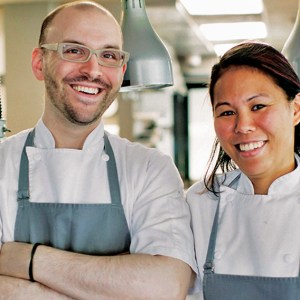 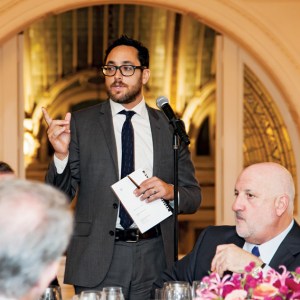 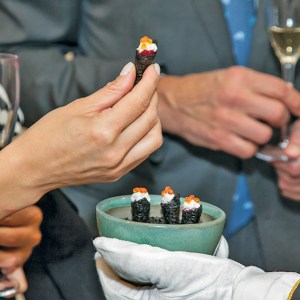 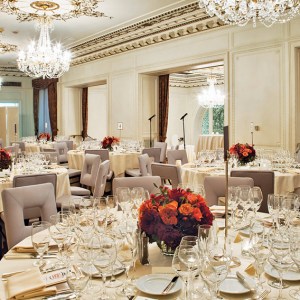 In 2011, Christopher Kostow seemingly came out of nowhere to earn three Michelin stars at the Restaurant at Meadowood in St. Helena, Calif., where the then 34-year-old chef’s impressive tasting menu incorporated modern techniques and pristine hyper-local ingredients to create a highly personal expression of Napa Valley’s distinctive flavors. Yet anyone who tasted his creations a few years before at Chez TJ in Mountain View knew that Kostow’s future was bright: The Victorian dining room was creaky, and the kitchen equipment was secondhand, but Kostow turned out dishes as fresh as those he currently produces. Today, every preparation on his ever-changing menu at Meadowood continues to reference Napa, whether he is smoking meat over grapevines or pickling the seeds from a prodigious crop of local okra to make white “caviar,” which he serves in a tin accompanied by blini, sour cream, onion, and smoked fish.

Five years ago, not long before he earned his third star, Kostow was at a critical juncture. His longtime sous chef had left, and an unsolicited résumé from Kim Floresca, a California native, crossed his desk. She and her partner, Daniel Ryan, had begun cooking collaboratively at the Broadmoor Hotel in Colorado Springs, Colo., and gone on to work at some of the best restaurants in the world including Per Se in New York City and El Bulli in Roses, Spain. “She had a résumé like I hadn’t seen before,” Kostow says. “I had one conversation with her, and I knew she was the kind of person who would not let herself fail.”

Floresca became the sous chef at Meadowood and then, 18 months later, was promoted to executive sous chef. Ryan left the French Laundry to join her as sous chef, and they resumed their collaboration. They worked together for another 18 months before leaving to take over One in Chapel Hill, N.C. Even though they are thousands of miles away making what Floresca calls “American progressive food with a nod to the South,” they maintain a strong California sensibility—so strong that Kostow nominated the pair as the best up-and-coming chefs cooking in the West Coast style for this year’s Culinary Masters Competition.

Floresca and Ryan’s competition dinner at the Palace Hotel in San Francisco highlights the products of their adopted home. In fact, Floresca brought almost every ingredient for the five-course dinner: lamb tartare sujuk with Parmesan cheese and fried clams; chestnut dumplings; Chicken of the Sea (cobia wrapped in chicken fat and roasted in schmaltz); rib eye encrusted with black rice and smoked beef fat; and a dessert made with cubes of sweet-potato cake, dots of pureed sweet potato and dulce de leche, tangerine sorbet, and shards of orange-blossom meringue.

On the night of the competition, a staffing problem forced Ryan to remain in North Carolina and Floresca to perform solo. After the tables were cleared, the chef took a deep breath and sat down with her mentor.

A favorite dish of Kim Floresca’s turned out to be the judges’ favorite, too: Her dessert, called Orange Flavors, was built upon a favorite Southern ingredient, sweet potato, incorporating precise cubes of finely textured sweet-potato cake with creamy dots of pureed sweet potato and dulce de leche. Fresh gooseberries added a tangy note, while bright citrus highlights were introduced with a drizzle of tangerine-and-clove vinaigrette, a dollop of tangerine sorbet, and orange-blossom meringue. “It’s acidic and refreshing,” Floresca says. “Something that cleanses the palate.”

KIM FLORESCA: I don’t think I could ever do the food that they’ve been doing in the South for generations, and I’m not going to try. I can never do shrimp and grits as Bill Neal did, because he’s the originator. I’m not going to be the person who makes fried chicken, because so many people can do it so much better. What I can do is pay homage to it.

CHRISTOPHER KOSTOW: There’s no way Napa has the depth of something like the American South. Still, I believe that with all the great chefs that come through Napa, there is still so much that has not been touched or spoken about in cooking. You know, using the elements of wine production, which is so central to that economy and that culture, too. There’s an understanding of what the Native Americans did as it relates to us. There’s so much in the wild that you can use. That’s what was exciting to me: You’re in this new frontier, but a land that is so well examined. I think that’s pretty exciting, but it will never be like the South.

KF: I think North Carolina actually has eight seasons, and we really start to build into what the following season is going to be. For us, it’s a constant evolution. Something that we learned from Meadowood was that there should always be something in the works, and if there isn’t—

KF: You really, really are. If you become complacent, it becomes boring. So you realize that you need to plan.

CK: Especially when items go out of season. Napa has like 30 seasons. Grapes are really good for two weeks. Then you have to change that dish. If you’re not always saying “What are we doing next?,” you can find yourself in the middle of a menu that’s not perfect. There are chefs who have created systems to ensure they don’t have to change the menu that much. Like, they plant a garden with six things, and those six things are always on the menu. I think that happens in the Bay Area more than people would like to admit. We just don’t do that.

KF: I think a lot of people could have taught me how to cook, but you taught me how to eat well. The partnership we had helped me break down the barriers of being too systematized at times and become more of a creator.

CK: So I taught you more how to taste rather than to just intellectualize?

KF: Not just taste. It’s very difficult to put it into words. It’s more how to love to eat well. Not just put something in your mouth and say it needs this or that. It’s more emotional.

CK: You are probably more technique driven than I am.

CK: It’s good. Some people look at technique as the lines on the plate and stuff like that. But technique is properly sourcing the beef, knowing how to prepare it, all of that—that’s technique. Maybe there are only two things on the plate, but man, a lot of things go into those two things. A few years ago, I think cooking was a little more technical. We’re stepping back a bit.

KF: You also have a great oversight as to what your end goal is—and how to get there.

CK: You need to have sort of a militaristic ability to command discipline into a team. You have to be able to creatively conceptualize stuff. You have to have the physical wherewithal to do the actual job. The drive to keep it all going. It’s a blue-collar job, simple as that. I don’t think people realize the hours. A poet can write a poem, and there will always be that poem. To be a good chef, you’re only as good as your last good meal, and that is exhausting. It’s a really cool job, but not for the reasons people think. It’s cool because great chefs are Renaissance people. They’re artists. They’re craftsmen. They’re thinkers. They’re businesspeople. There’s no other profession where you have that all wrapped up in one person.