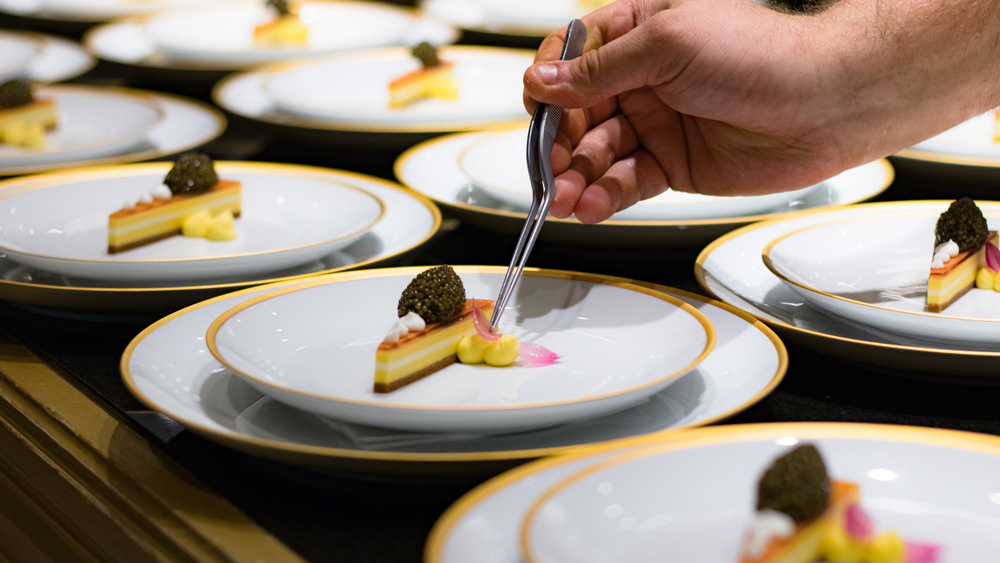 On Saturday night, a collection of the country’s best chefs gathered to cook a meal for a great cause. At Robb Report‘s Culinary Masters William Bradley of Addison was joined in his kitchen by Thomas Keller, Gavin Kaysen, Dominique Crenn, Ming Tsai, Josiah Citrin, Paul Bartolotta, and Jerome Bocuse to create a seven-course gala dinner. Their menu featured the finer things in life, from caviar to truffles to king crab.

The chefs and dinners’ guests were there to benefit Ment’or, a foundation created by Daniel Boulud, Bocuse, and Keller, after Jerome’s famous father, Paul, encouraged the trio to field a winning American team for the Olympics of cooking, the Bocuse d’Or. Under their tutelage, the U.S. took home its first-ever gold in 2017 in Lyon, but the mission of Ment’or has expanded to help young cooks progress in their career, by offering mentorship and grants.

Everyone was also there because they love food. So we’ve decided to take a look back at the dishes, chefs, and wine that made it such a memorable meal.

First Course: Thomas Keller
The only American chef with two three-Michelin-starred restaurants knew he wanted to do a caviar course, and do it in a classic way. To showcase the Chinese caviar, he serves it perched it on a deviled bantam hen egg terrine with a sweet red onion gelée, toasted brioche, and créme fraiche. “It’s a beautiful presentation of caviar with classic flavor profiles,” Keller says.

Second Course: William Bradley
At Addison Bradley creates modern French cuisine, driven by Southern California produce. The native San Diegan took the reins of the restaurant back in 2006 and has risen to the designation of Grand Chef by Relais and Château, an honor shared with fewer than 200 chefs in the world. Bradley’s crab three ways featured a crab chip, a generous chunk of king crab leg, a crab salad with coconut and curry on top, and then accompanied by a passion fruit sauce.

Third Course: Jéróme Bocuse
Bocuse’s father passed earlier this year, so he wanted to pay homage with a classic dish from monsieur Paul’s repertoire. The rich and addicting mussel soup was creamy and complex, featuring saffron from Spain that retails for $700 per oz. and a warming peppery note from espelette.

With so many chefs rooted in French technique at this dinner, Bartolotta injects some classic Italian in the mix with his outstanding white truffle-topped pasta course. He created a ravioli with sheep’s milk ricotta, tossed with a bit of brown butter, then topped with pecorino, shaved parmesan, truffles, and a drizzle of Marsala veal glaze.

Fifth Course: Gavin Kaysen
The James Beard Award-winning chef behind Bellecour and Spoon & Stable in Minneapolis created a classic French of chicken ballotine stuffed with wild rice from his home state, served atop a bed of creamy cabbage and alongside a brown butter, pine nut, and apple puree.

Sixth Course: Josiah Citrin
The chef behind two-Michelin-star Melisse in Santa Monica created the last savory of the evening. He served 21-day-aged lamb from Elysian Farms in Pennsylvania. His team then braised eggplant in lamb jus and tomato that’s topped by a charred eggplant puree with a touch of miso and dried shiitake.

Dessert: William Bradley
To cap the night, the Addison team created their haute take on the French classic, pain perdu. They soaked house made brioche in banana custard with vanilla bean then seared in on the griddle like you would French toast. If that wasn’t decadent enough, they dipped it in caramel, topped with a banana puree and coffee ice cream.