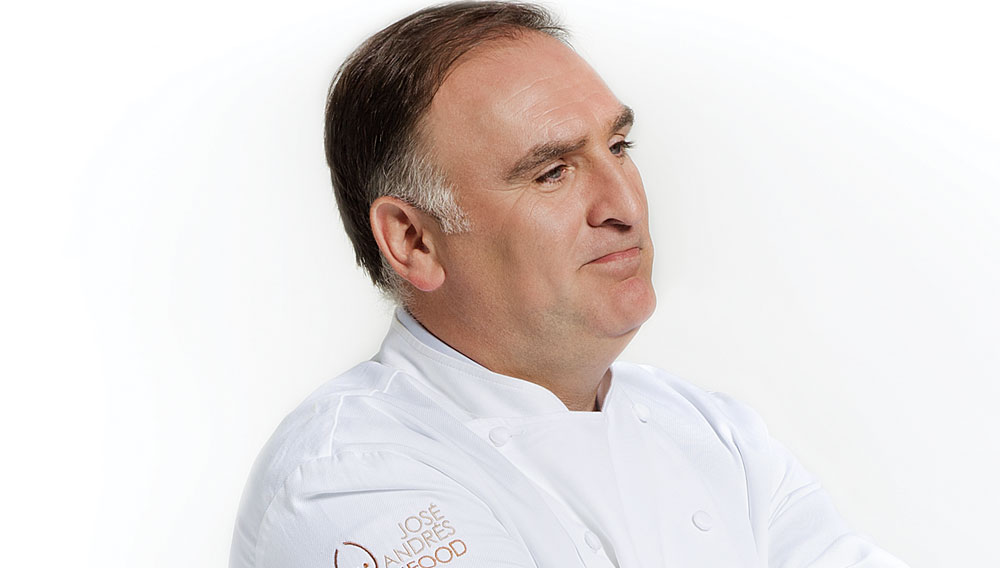 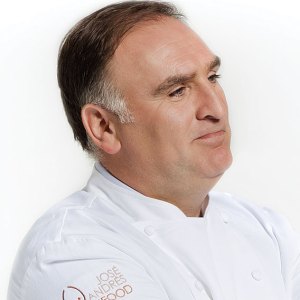 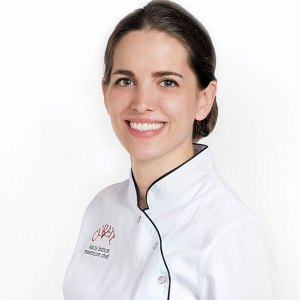 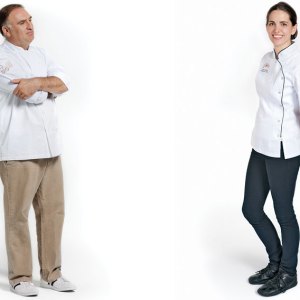 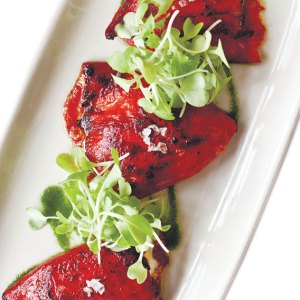 José Andrés may be one of the most innovative chefs in America, but he came up through the profession in the conventional way. Born in Asturias, Spain, he entered the kitchen when he was just a teenager, attending culinary school and serving a long apprenticeship at El Bulli, the revolutionary restaurant in Catalonia where Ferran Adrià developed his avant-garde cuisine. After moving to the United States, Andrés opened his first restaurant, Jaleo, in Washington, D.C., where he prepared what he knew best: straightforward Spanish tapas. But the success of that restaurant enabled him to spread his wings. He opened Minibar, a tiny temple of modernist cooking located inside his wildly popular Café Atlántico. Soon after, he added Bazaar restaurants in Los Angeles and South Beach, and three restaurants in Las Vegas. This year he closed Minibar and Café Atlántico and collaborated with the National Archives to open a pop-up restaurant dedicated to reviving lost American recipes. (Minibar will reopen in the fall.) In the course of this fast-paced expansion, he has garnered nearly every accolade a chef can receive and then some, winning several James Beard Foundation Awards and, in 2012, being named one of Time magazine’s 100 most influential people in the world.

Given his meteoric rise, Andrés could be forgiven if he originally wondered what Katie Button was doing in his kitchen. She began her career as a member of the waitstaff at Café Atlántico in 2007 with no restaurant experience whatsoever; in fact, only a few weeks earlier, she had held a prestigious postgraduate fellowship in biomedical engineering at the National Institutes of Health. But her hard work and passion quickly made up for her lack of formal training. Button fell in love with the culinary arts and, just as significantly, with one of Andrés’s managers, Felix Meana, who is now her husband.

She begged Andrés to recommend her for a dining-room apprenticeship at El Bulli. After completing this stint in Catalonia, she was determined to cook professionally and successfully lobbied the pastry chef there, Albert Adrià, to allow her to return as an apprentice the following summer—this time in the kitchen. In the interim, she and Meana relocated to Los Angeles to assist in the launch of Bazaar, Andrés’s first venture outside of Washington, D.C. By the time her second tour of duty at El Bulli was over, she had worked as a cook for a grand total of only 18 months; thus, her decision one year later to move to Asheville, N.C., and—with her husband and parents, Liz and Ted Button—open her own restaurant, Cúrate, was nothing short of audacious. The establishment’s name means “cure yourself” in Spanish—calling to mind both Button’s previous career path and the restorative powers of her playful presentations of traditional Spanish tapas. Certainly Button’s cuisine has proved healthy to her venture’s bottom line: Critical praise for Cúrate is piling up almost as quickly as the queue of patrons waiting outside the restaurant’s door to sample Button’s delicious tapas prepared with the best local ingredients. —Lisa Abend

KATIE BUTTON: It’s true, I fell in love with your manager—but that came later. At the time, I had just given up my fellowship and needed a job. I didn’t really know anything about restaurants, so I opened the Zagat guide and started looking for the best ones. Your restaurants were all ranked really high, so I chose one of them.

JOSÉ ANDRÉS: Finally! So now we know Zagat is good for something besides looking up addresses. It’s good for human resources. You were working front of house, but then you came into the kitchen, right?

KB: On my days off I would volunteer to do prep at Minibar.

JA: So there was this person with no idea about cooking who fell in love with it very quickly. Still, when you asked me to recommend you for a stage [kitchen apprenticeship] at El Bulli, I had doubts. My first reaction was, “Uf, uf, uf, uf.” You had no experience working in a hard kitchen, and I’ve been burned. I kind of have a record of recommending people to Ferran and having them quit the day after they start. But you seemed very committed.

KB: I wasn’t going to let you down.

JA: So I thought, OK, you can go to El Bulli, but you have to prove yourself first. That’s when you came to L.A. with Felix to work at the Bazaar. I don’t see myself as a mentor—I just want to create an environment where anybody can succeed. I try to give people a platform, but it’s always symbiotic, because I benefit from their success too.

KB: But you gave me so many opportunities. You were so generous. You flew down to be at the opening of Cúrate; you sent down members of your team to help us out.

JA: Yeah, I don’t really know how to make money, only spend it. But I was very happy with what you and Felix were doing, and I wanted to give you a gift. I could have sent flowers or written a note, but it was an easy choice: I wanted to support you. And if there’s anything that I know how to do, it’s open a restaurant.

JA: You have tremendous drive. You came into my life unexpectedly and started moving down a path. You moved to L.A., then went to El Bulli, and then came back to the U.S. and, throughout it all, did what you needed to do to succeed. You also took a huge risk. You moved to this small city in the South and opened a Spanish restaurant. I love that—it’s how we revive the economy, and it’s the future of American cuisine: bring good food to small towns across the country. You’ve been incredibly successful, and success empowers everyone in our family—I feel like you’re part of our family, and this is the way to keep all of us moving forward, by sharing our successes and failures. And I love your cooking.

“I Want to Feed the Many”

In addition to overseeing a rapidly growing restaurant empire, José Andrés is a leading advocate for chefs interested in working to alleviate hunger and malnutrition around the world. “I know that there are plenty of people who think that chefs should just stay in the kitchen,” Andrés says. “But 50 years from now, I don’t want to look back and think that we, as a profession, could have done more to end hunger. We can’t afford not to take action.”

Andrés first took action 20 years ago, when he began working with DC Central Kitchen, a Washington, D.C.–based organization that provides some 5,000 meals a day to low-income citizens, as well as culinary job training for the underemployed. When an earthquake devastated Haiti in 2010, his experience with the organization inspired him to do something internationally. “After the earthquake, I felt like I had to do more,” Andrés recalls. “As a chef, I feed the few, but I want to feed the many.” Together with his wife, Patricia Fernández, he created World Central Kitchen to accomplish this ambitious aim.

The organization is designed, he says, to eradicate global hunger by empowering local communities. World Central Kitchen, in other words, does not merely distribute provisions; the organization also teaches people how to grow and prepare food, providing the infrastructure necessary for individuals and populations to support themselves in the long term. “This isn’t about feeling pity,” says Andrés, who has made several trips to Haiti to oversee the group’s work there. “It’s about respect, and offering a little push in the back.”

In Haiti, that push has taken various forms: a canteen with a chicken farm attached; a bakery that supplies goods

to orphanages; and solar-powered cookstoves, which the organization distributed to villages not only to protect women from the unhealthy fumes produced by traditional cooking methods, but also to liberate girls from their usual task of collecting firewood so that they have time to attend school.

Founded in 2010, World Central Kitchen also has plans to expand its work into other parts of the world. “Food is the most important source of fuel on the planet,” Andrés says. “We need to make sure it’s available to everyone—and in a way that enables everyone to live a full life.” —L.A.