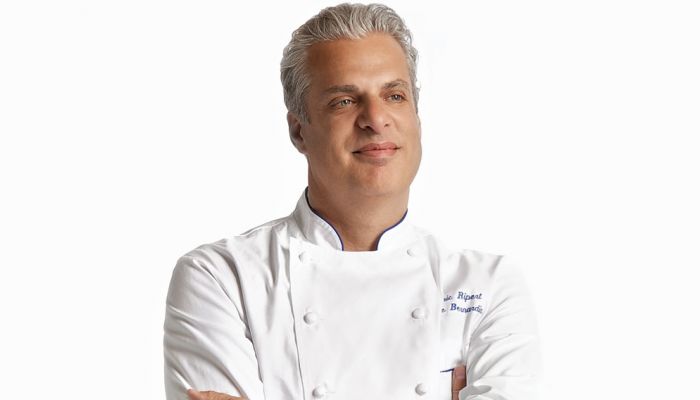 Eric Ripert makes the extraordinary look effortless. Throughout his 18-year tenure as executive chef of Le Bernardin in Manhattan, Ripert has seen the restaurant consistently receive four stars from The New York Times. Michelin has been just as generous, bestowing its top rating of three stars on Le Bernardin year after year—an achievement made all the more remarkable by the fact that Ripert’s menus focus entirely on seafood, the most difficult ingredients to prepare perfectly dinner after dinner.

Ripert, who was born in France and holds the Légion d’honneur, also oversees restaurants for Ritz-Carlton hotels in Washington, D.C.; Philadelphia; and the Cayman Islands. He is a media fixture as well, thanks to his four cookbooks, his regular appearances on Top Chef, and his PBS series, Avec Eric. Moreover, he is active on the charity front, which is how he came to admire Gavin Kaysen: They first cooked together at Le Bernardin for a Tibetan aid benefit.

Kaysen, the 33-year-old executive chef at Café Boulud on Manhattan’s Upper East Side, boasts his own constellation of stars: three from The New York Times and one from Michelin. The James Beard Foundation has honored him as a rising star, and after participating in the prestigious Bocuse d’Or competition—also known as the “Olympics of food”—in 2007, he was appointed head coach of the American team for the next round, in 2013.

A graduate of the New England Culinary Institute in Montpelier, Vt., Kaysen developed his farm-to-table philosophy at Domaine Chandon in Napa Valley, then went on to the market-driven kitchen at L’Auberge de Lavaux in Lausanne, Switzerland; he has also cooked under Marco Pierre White at L’Escargot in London. Daniel Boulud, who was likewise wowed by Kaysen’s cooking, hired him away from El Bizcocho in San Diego in 2007.

Ripert chose Kaysen as an up-and-coming chef for many reasons, not least of which is how he manages to pay homage to Boulud’s signature dishes while expanding the menu with his own innovations. Boulud’s famous potato-encrusted striped bass with red-wine sauce is usually on the menu, but it might compete with Kaysen’s own herb-crusted halibut with potato gnocchi. Ripert sees his young neighbor (the two first met at the elevator of the Manhattan high-rise where they both live) as a front-runner in the resurgence of French cuisine. Ripert admires Kaysen’s ability to strip away the flamboyance and focus on what has always made the heirs of Escoffier leaders in the global kitchen: equal homage paid to ingredients and to technique. —Regina Schrambling

ERIC RIPERT: I was celebrating my anniversary with my wife not too long ago at Café Boulud, and I had a hamachi crudo with some cilantro flowers. Then a fantastic pasta with sea urchin, black pepper linguine, and some baby calamari; and then a flounder with salsify. I remember saying to my wife, “Salsify is a tough vegetable, and I know very few chefs who know how to cook it well. Gavin is one of them. The other one is Christian Delouvrier.”

ER: Yeah, right. Christian is no joke. I remember the flounder complementing the salsify. And I remember the rack of lamb, with the shoulder braised, put in a kataifi, almost like a purse. And some eggplant with it.

ER: I don’t remember the wine.

GK: That’s the part you’re not supposed to remember. You remember the first bottle. But not after that….

ER: I have tasted your food many times, and also we cooked together at Le Bernardin. I not only love what you are doing but also I grasp the techniques. The right technique can be something as avant-garde or modern as using sous vide to compress watermelon, or it can be something more traditional. It’s a mastering of the techniques that is very personal to you and at the same time, again, it’s about the ingredient. It’s not about the chef’s ego; it’s about cooking for the ingredient and pleasing people, of course, ultimately.

GK: What impresses me every time I’ve eaten at Le Bernardin is the focus and the precision on the food. If you’re going to have tuna, it’s going to be the most insane tuna with the most correct accompaniment for that tuna. There’s something to be said about a chef who puts food on a plate and knows when to stop. And that’s one thing I’ve learned from you—that you know you’ve got enough on the plate right now.

Kind of funny how full circle this is for me. When I was living in Switzerland in 2000, I had a five-week vacation from the restaurant, and I was on the train and a friend of mine had sent me your newest cookbook, the Le Bernardin Cookbook. So I read that book on the train, start to finish, and was so impressed by the cleanliness of the way the food read. I could taste everything. I’d never eaten at your restaurant before. But I was so inspired by how it read—focused was the word I kept thinking of. I went back into my journal to see if I’d written anything about that cookbook. Interestingly enough, there was about a page that was just ideas of food that I had thought up while I was reading that book. And I still use those ideas today.

ER: I like that you change the menu very often, but I like also the fact that you keep the legacy. I am thinking always of the striped bass with the potato. It’s obviously a legacy of Daniel Boulud you keep on the menu.

GK: It’s probably the most exciting dish to cook, because it’s all about technique. If you can’t cook fish correctly, you won’t be able to make this dish. I did Bocuse d’Or for eight years, so obviously I’m kind of a freak for French technique.

ER: I thank you on behalf of all French people. French technique is very important. And it’s universal because it’s based on logic. All those techniques are not for the fun of it—or for making it complicated. They’re all about capturing the flavors and having the right techniques to make it good in the end. It’s about taking this nasty son-of-a-gun rooster who has for years been attacking you and putting it in a pot and making it good.

GK: Perhaps what’s going away is not the old-style French food. It’s the people who helped create that style that we’re all trying to re-create.

ER: For me, Escoffier meant a restaurant where meals went on for hours. I mean, come on. And there was also a little bit of intimidation, when the public doesn’t necessarily understand everything has a purpose. It was not meant to be stiff. It was respect for the client from the waiter; it was respect for all that tradition that goes on with the experience; and it was respect for all those ingredients and the way they were cooked. Very often people thought it was arrogance, but it was all about homage and paying respect. At one point, yes, there was a backlash and “the future of French is dead.” I think it’s coming back in a relaxed way, which was needed.

Fresh Ingredients for Every Table

ERIC RIPERT’S commitment to putting fresh ingredients on New Yorkers’ plates extends far beyond the formal dining room of Le Bernardin. He is also an ardent promoter of City Harvest—a nonprofit group dedicated to feeding the needy of New York City—which he chose as his beneficiary for the Robb Report Culinary Masters Competition.

For 30 years, City Harvest has been gathering food from the city’s restaurants, including Le Bernardin, as well as from farmers’ markets, supermarkets, farms, corporate cafeterias—anywhere anything edible is grown or cooked—and delivering the provisions to programs that now serve 300,000 people every week. Unlike food pantries, which do very well at collecting canned food and other staples, City Harvest focuses on quickly moving perishables—such as eggs, bagels, juice, and produce—onto the tables and plates of those in need.

After working with City Harvest for 13 years, Ripert recently was named chairman of the group’s Food Council, a board of industry professionals and star chefs, including Dan Barber and David Chang. One of the group’s accomplishments is a new distribution center in Queens with ties to a national network of food donors. When the network informed the center that 18 and a half tons of sweet potatoes were available from a farm out of state, notes Ripert, “City Harvest was able to send trucks to go get those sweet potatoes.”

City Harvest also stages mobile markets, staffed by volunteers, in the South Bronx, on Staten Island, and other locations in the city where residents can pick up fresh fruits and vegetables free of charge and learn from Ripert and other chefs how to cook them. “Often people don’t know what to do with that broccoli and apples and potatoes, and chefs go there and teach them,” he says.

At City Harvest’s annual fund-raising auction last April, Ripert made news when his offering of a dinner cooked in a private home for 20 people went for $200,000. And that was after he put in the $1,100 winning bid on a bottle of Herradura tequila. He also has showcased the group’s efforts on his PBS series, Avec Eric.

Six hundred food banks, soup kitchens, and other outlets receive supplies from City Harvest, which says it collects 42 million pounds of salvageable food every year to the benefit of more than one million New Yorkers.

One more reason Ripert loves City Harvest: “It’s so well run. They spend almost every penny on the organization.” The amount expended on food assistance is 91 cents of every dollar raised.