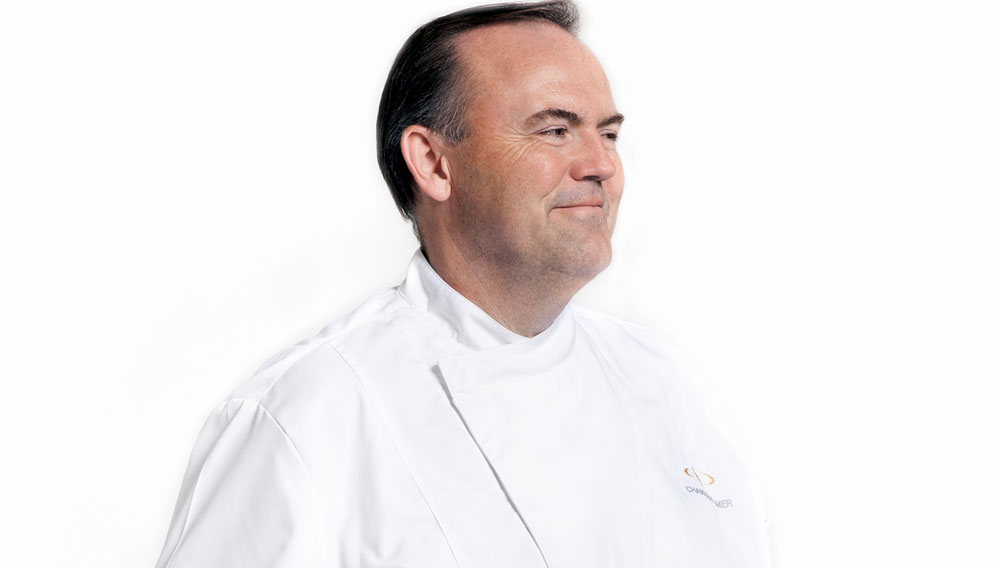 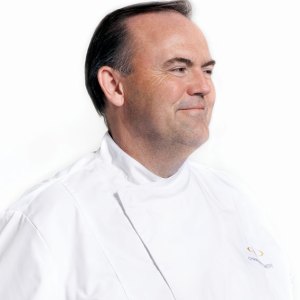 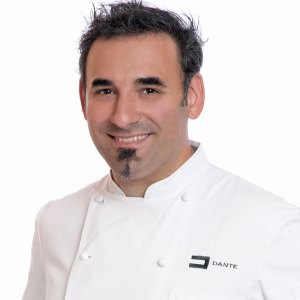 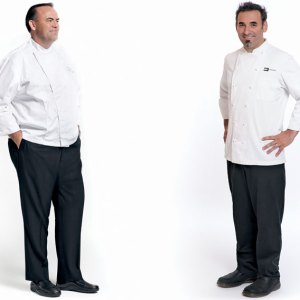 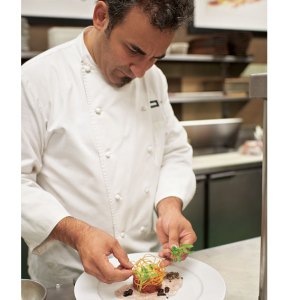 As one of the original chefs to combine French techniques with local and seasonal ingredients—a practice that results in dazzling dishes with robust flavor—Charlie Palmer is one of the most influential pioneers of new American cuisine. His first restaurant, Aureole, which opened in a townhouse on Manhattan’s Upper East Side in 1988, instantly defined a new category of modern luxury restaurant—one as stylish and chic as it is serious about food—winning rave reviews for novel dishes that have since become classics, such as the scallop “sandwich” and duck three ways. Today, Palmer has received virtually every honor the food-and-wine world can bestow, and his 11 restaurants, two wine shops, and two hotels span the country from New York City to Northern California’s Sonoma County.

Palmer also has a true eye for talent: The celebrated chefs who have emerged from his kitchens include David Burke, Michael Mina, Bryan Voltaggio, and, most recently, Dante Boccuzzi.

Palmer signed up Boccuzzi fresh out of the Culinary Institute of America in 1991. Aureole had just received three stars from The New York Times, and young chefs were competing for positions in its groundbreaking kitchen. During an internship there, Boccuzzi displayed such consistent performance and obsession with detail that Palmer decided to put the young man on staff.

More than two decades later, Boccuzzi is quietly building his own gastronomic legacy in northeastern Ohio, where he grew up. After returning to Cleveland in 2007, he quickly earned critical acclaim for both his modern American cooking at Dante and his cutting-edge Japanese cuisine at Gingko. He also owns the DC Pasta Co. in Strongsville, Ohio, and this summer he opened DBA (for Dante Boccuzzi Akron), which also offers a modern American menu.

Dante, located in a gorgeous former bank building in a historic Cleveland neighborhood called Tremont, is Boccuzzi’s most ambitious effort to date. The invention of a resourceful chef with many stamps in his passport, this restaurant’s modern American cuisine is liberally accented with Italian, French, and Asian culinary influences. His five-course tasting menu, for example, might include farro with braised artichokes and basil foam, a Maine lobster spring roll with asparagus and ginger sauce, branzino with pickled ramps and cardamom-spiced carrot puree, or duck breast in green curry.

The 41-year-old chef’s repertoire might seem a bit polyglot, but it reflects his far-ranging résumé. In addition to Aureole, Boccuzzi has cooked at Armani/Nobu in Milan, at Mandarin Oriental hotels in Hong Kong and San Francisco, and at the L’Albereta resort—where he worked alongside Gualtiero Marchesi, one of Italy’s most innovative chefs—in Franciacorta, Lombardy.

Boccuzzi’s ability to weave so many varied influences into a singular style of cooking is one reason Palmer sees him as the future arbiter of American cuisine. But the fact that the Ohioan has brought that worldly sophistication back to his hometown is even more significant: His efforts not only demonstrate the advantages of local ingredients, but also heighten consumer appreciation for ambitious cooking. Eventually Americans in smaller cities will be eating as well as those in the epicurean capitals. Rising kitchens, so to speak, lift all menus. —Regina Schrambling

DANTE BOCCUZZI: When I came out of cooking school, Aureole was the place to be. Everyone was talking about it, and you were doing all this up-and-coming stuff no one had seen before. There was a lot of competition among us to work there. Plus it was the only restaurant you had, so you were there every day, in our face, making sure everything was right. You were always trying to achieve perfection.

CHARLIE PALMER: The kitchen was intense. There was a lot of talent, and a lot of these young people right out of school wanted to prove themselves. At the time, we were experimenting a lot, and you did really well at creating your own dishes. But you also had respect for the classics. How many times would I say, “We can’t do stupid food”?

DB: I didn’t talk the first four months. I remember standing in the salad section and you coming in and asking, “Is this kid all right?” I was scared! But I was also concentrating on doing the best I could.

CP: What’s unique about you is, you learned everything you could from me and my chefs, but then you went on and had experience with Nobu, which was a drastically different kitchen from Aureole. We all take all those ideas that we learn—some good, some bad—and eventually craft a cuisine that’s our own. That’s where you excel—taking different experiences and creating something that’s your own.

Take rabbit prepared three ways—a dish ripped off from the Aureole menu way back when. We started that whole-animal usage, where you take not just the loins but the legs and use every part. But you do it with Mediterranean flavors—more the South of France. Or tuna tartare. Back in the day it was kind of revolutionary, and now every menu in the world has it. But your interpretation is unique, with the poached egg and the olive-caper rémoulade.

DB: At Aureole, you would write a recipe on a piece of paper and draw a diagram so we’d know how to present it, and I have kept notes like that every day ever since—well, now I’ll add a photo. I have 3,000 to 5,000 recipes in my database. There’s always some type of inspiration, and one dish I do all the time is a Charlie Palmer classic: the sea scallop sandwich. At Aureole, I would do 30 to 40 of those a night and eat all the leftovers. It’s just this intense dish, with scallops encrusted in shredded potatoes. When I’m doing the chef’s table at Dante, with 21 courses, I’ll put it on the menu with a personal spin.

CP: You’ve gone back to the city where you grew up, and that in itself is an example of the future of food in this country: chefs going back to their roots. What you’re doing in Cleveland will grow, and people in Cleveland will understand you’re bringing something special to them. It’s pretty ballsy to do a world-class restaurant in downtown Cleveland, especially a Japanese one. But the future of food is not just in major cities. Food prepared at your level makes it better for American food as a whole.

DB: I never really wanted to come back. After I was at Aureole five years, I came back for a little while, but at that time it was really uninspiring; there was nothing going on. Now it’s all changing with the farm-to-table movement. And I’m an instant superstar, at least every time I go to Home Depot.

As his far-flung restaurant and hotel interests demonstrate, Charlie Palmer is as much a businessman as he is a chef—a fact that explains in part why he has long been a supporter of Citymeals-on-Wheels. After all, the New York City group, which Palmer chose as his beneficiary for the Robb Report Culinary Masters Competition, spends every penny from public donations on regularly delivering dinners to 16,500 homebound elderly citizens.

“I like how well it is run as a business and what it does,” Palmer says. “It is comforting to know that the money raised goes directly to the preparation and delivery of the meals.”

Citymeals was famously founded around Christmastime nearly 31 years ago by restaurant critic Gael Greene and the late chef James Beard, who were appalled by newspaper accounts of New York seniors going hungry in their homes during the holidays. In a single weekend, they raised $35,000 by telephone from their food-industry friends and then partnered with the New York City Department for the Aging, with the stipulation that every dollar be spent on the meals. They fed 6,000 people that holiday.

Palmer is among the chefs who keep the food coming. To date, the organization has put 45 million meals onto tables or trays across the city’s five boroughs. Last year, 1.8 million meals reached these elderly New Yorkers, some of whom were over the age of 100. Recipients are provided one meal a day. Every fall, before the onset of cold weather, they are given 12 shelf-stable meals for days when delivery crews are unable to reach them.

Citymeals operates in partnership with the Department for the Aging, but the nonprofit organization raises money separately from the government agency. The food Citymeals provides is cooked at community centers in various neighborhoods. Volunteers perform the deliveries, either on wheels or—thanks to Manhattan’s many walk-up buildings—on heels. The human touch makes a difference: Often the hands bearing a meal belong to the only person that the recipients see all day.

Since Palmer joined Citymeals’ board of directors in 1994, he has been involved in raising money for the organization by cooking at benefits. The events are an indispensable source of revenue in an economic environment that has seen increased competition for scarce charitable dollars. In 2009, when he reopened his renowned restaurant Aureole in a new location in Manhattan, Palmer raised $28,000 for the organization at a gala dinner that, of course, featured his signature scallop sandwiches.

Palmer or one of his chefs cooks at Citymeals’ annual Chefs’ Tribute fund-raiser, and he also contributes content to the Recipe of the Month newsletter, which Citymeals sends out by e-mail to generate interest in the cause. The charity’s founding executive director, Marcia Stein, fondly recalls the chef teaching a group of students how to use herbs instead of salt to reawaken palates dulled by age to the world of flavor. —R.S.