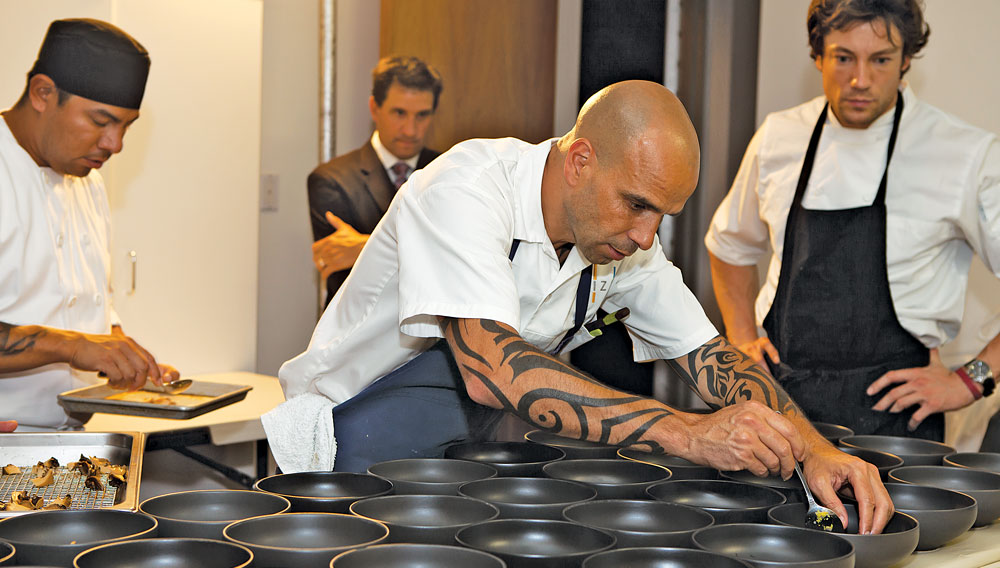 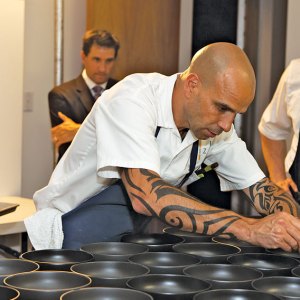 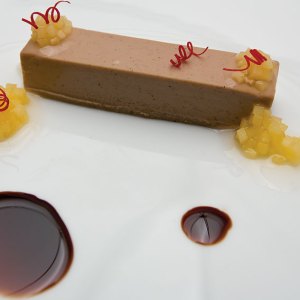 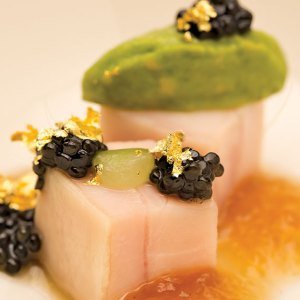 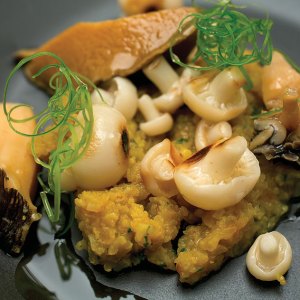 Location: Monarch House, a contemporary estate high above Hollywood, Calif., that made a sparkling backdrop for Lahlou’s modern Moroccan cuisine.

The Event: In the hours before his competition dinner, Lahlou methodically unpacked five enormous coolers he had shipped from San Francisco. They held pureed mango, a golden blend of vadouvan spices, slivers of preserved lemon, and numerous other items—representing, in all, about 90 percent of the meal’s preparation, he noted as he delicately plucked microfine curls of red jalapeño from a water bath. “I’m going to try to maintain a level of curiosity,” he said, “so portion sizes are very small. Each bite will be something new.” Indeed, Lahlou prepared more dishes than any other chef, starting with a flurry of nine canapés that ranged from briny Hokkaido uni barely dressed with sea grapes and seawater to an alabaster cube of chicken embellished with caviar, cucumber, jasmine, and gold leaf. His menu moved from such clear flavors to a five-course dinner filled with complexity. The first course—and the most difficult of the night, Lahlou said—was a bar of foie gras exotically spiced with berbere and vadouvan. It was at once airy and dense with flavor, its richness offset by a tiny dice of yellow quince, those bright red spirals of jalapeño, a dab of 50-year-old balsamic vinegar, and toasted brioche. “This is my personal idea of Moroccan cooking,” Lahlou said. “Ethnic food made very elegant, without distracting from the tradition behind it.”

Location: Carbon Mesa Estate, a 6.5-acre property in Malibu, Calif., that provided a sun-splashed setting for a Japanese-style brunch.

The Event: Abergel spends a lot of time behind a grill: Most items on the menu at his hip restaurant in Hong Kong are threaded on a skewer and cooked over charcoal. And here he was, atop a mountain overlooking Malibu, tending a fire made with Japanese bincho, which burns hot and clean, he explained, “so what you’re grilling doesn’t have a burnt flavor; it has a smoke flavor.” His grilled quail marinated in mouthwatering shichimi, a chili-based seasoning powder, was served with an earthy salad of lotus root, burdock, and carrots as the centerpiece of a brunch built on Japa­nese flavors. Having traveled light, Abergel relied on nominating chef Masa Takayama’s best local purveyors for most of his ingredients, such as silky Japanese eggplant, which he made into a traditional summer dish with pickled garlic, fried shallots, and tosazu, a vinaigrette made with rice vinegar and bonito (“the bacon of the sea,” Abergel said). Most memorable, however, was the pristine Santa Barbara sea urchin. Abergel presented the perfect orange lobes in a black cup dusted with a crunchy mixture of fresh nori, Okinawan sea salt, yuzu zest, and panko. Each judge was given a spoon and firm instructions: “Smash it! Really get in there and mix it up.” The result was a kind of cool custard with a beguiling taste of the sea and a gritty texture like grains of sand. It was impossible to eat such a dish and not think of Takayama. And so it came as no surprise when Abergel nodded toward his mentor and said that, with this meal, as with every other, “I’m cooking to impress him.”

The Event: A seasoned culinary competitor and coach of the American team for the 2013 Bocuse d’Or, Kaysen arrived with a strategy: create a menu that marks the high points of his career. To honor his current boss, Daniel Boulud, there would be rich celery-root agnolotti covered by generous shavings of white truffle. (“Daniel has a secret obsession with pasta,” Kaysen said.) And for Eric Ripert, the master of seafood, Kaysen served poached turbot with sea urchin, pickled raisins, and cross sections of cauliflower that resembled sea coral. Ripert, for one, was impressed—particularly by the turbot, a fish that is almost impossible to cook well. He knew of a single technique that would create such a moist, shiny fillet, and it turned out to be exactly the one Kaysen used: poaching in a creamy velouté sauce. “The thickness of the broth keeps the juices inside the fish,” Ripert explained. “I don’t know anyone else who does it.”

As the courses unfolded seamlessly, Kaysen revealed another tidbit about his culinary education: Every time he has a memorable meal, he pockets a spoon. So far, he has taken 400—including a fish spoon from Ripert’s restaurant Le Bernardin. After the turbot was served, he returned that spoon as a gift, affixed to a plaque engraved with a Buddhist saying. Then Kaysen walked back to the kitchen, opened the pocket of his chef’s coat, and whispered, “Shhhhh.” Inside was a shiny silver spoon from the Ritz.

Location: Trump SoHo New York, which provided views of downtown and beyond for a dinner that crossed many borders.

The Event: The final dinner of the 2012 Culinary Masters Competition took place on the eve of Hurricane Sandy, 46 floors above the city in the hotel’s SoHi room. As the clouds rolled in, Boccuzzi prepared to serve a five-course meal that would represent the best of a career that spans the distances between Milan, Hong Kong, New York City, and San Francisco. First came a series of witty appetizers, such as tiny panini filled with truffled mortadella, a sushi roll served as a push-up pop, and “Caviar in a Cloud,” a miniature parfait of potato foam cradling a spoonful of caviar. The fun continued as the meal began: A guitar pick dressed up each place setting (the chef is also a passionate musician), and the introduction came from comedian Mario Cantone, who met the chef when Boccuzzi was executive chef at Charlie Palmer’s restaurant Aureole. Cantone loved the cooking so much that he sent his empty plate back to the kitchen with a heart drawn in the remnants of the sauce.

But make no mistake: Boccuzzi is an intense chef. He did not even trust airline baggage handlers to deliver his ingredients; he packed them up in his yellow SUV and drove the seven hours from Cleveland. Boccuzzi’s menu delivered, too, consisting of dishes that juggled multiple components with the grace of an acrobat. A course of roasted sea scallop, for example, included slivers of Comice pear, a crunchy lobster spring roll, tender clamshell mushrooms, and a bright ginger-butter sauce. Rather than overwhelm and confuse the palate, the dish was exciting to explore bite by bite, each different from the last.