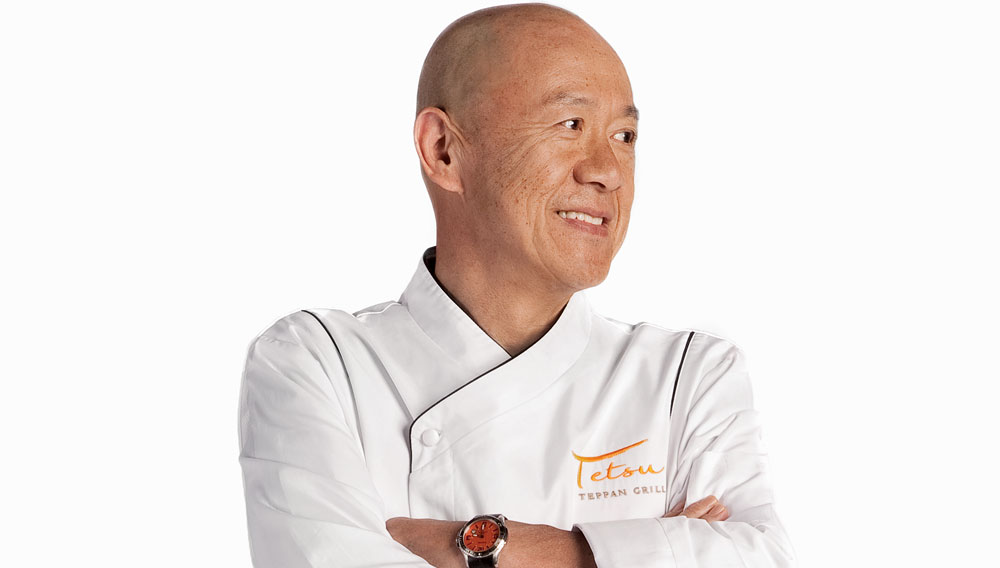 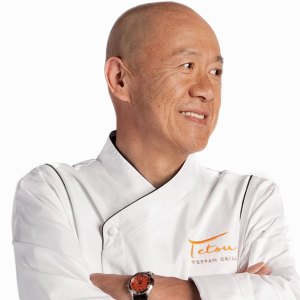 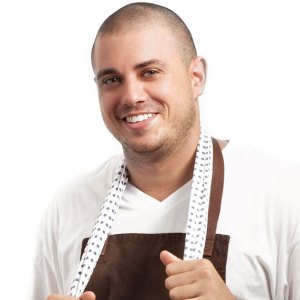 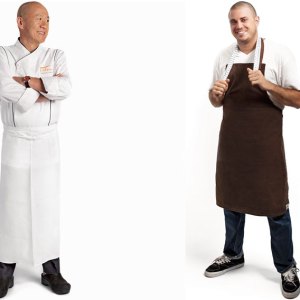 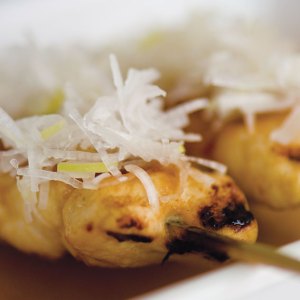 Masa Takayama is renowned for his Japanese restaurant Masa, a serene, 26-seat space in New York City’s Time Warner Center where the chef presides over meals made from sublime ingredients and served at a luxurious tempo. His rarefied sushi, which may be lavished with caviar or truffles, and other dishes have garnered three stars from Michelin and put him at the pinnacle of the New York City dining scene since the restaurant opened in 2004; prior to this, Takayama lived in Los Angeles where he ran the equally renowned Ginza Sushi-Ko. In both cities, he is also known for leaving diners awestruck by the bill: Dinner for two at Masa is now easily a $1,500 affair.

When Takayama was asked to name the best up-and-coming chef in the world, it was a surprise to hear his choice was Matt Abergel, the owner of Yardbird, a hip spot in Hong Kong that specializes in chicken. It turns out, though, that Abergel and Takayama share the same culinary philosophy (use the freshest ingredients and express them cleanly and simply), and both value attention to detail in every aspect of their restaurants. Their similarities are partly the result of Abergel’s apprenticeship and eventual friendship with Takayama, and of Takayama’s help in developing the concept for Yardbird. To this day, Takayama offers advice down to the dipping sauce.

Abergel grew up in Calgary, Alberta, and started out cooking in a grocery store, at age 14. Five years later, he got his first job in a Japanese restaurant, in Vancouver. He continued to cook at Japanese restaurants in the city until he came to New York in 2008, in search of a mentor. With no formal culinary training, Abergel was almost too intimidated to apply as an apprentice at Masa, but with a push from his girlfriend at the time—Lindsay Jang, now his partner at Yardbird—he got the job. He quickly impressed Takayama with his innate understanding of technique, ingredients, and even dining-room aesthetics. In 2008, Abergel left Masa to become head chef at Zuma in Hong Kong, where he remained until opening the yakitori restaurant he had dreamed about for years.

Yakitori, a Japanese dish of chicken skewers grilled over charcoal, may be the basis for the menu, but Abergel prepares them inventively and in every permutation: thighs and wings as well as hearts, gizzards, and tails. In addition to the yakitori, some creative side dishes (such as Korean fried cauliflower, or KFC), a long cocktail menu, and a dining room with a hip-hop and funk soundtrack and a cool industrial design have made the restaurant a sensation from the moment it opened last year. One reviewer gushed, “The chicken here is being treated no differently than the finest piece of toro.” No surprise there. —Michalene Busico

MATT ABERGEL: When I came to New York, I really wanted to find a teacher—someone who would inspire me. And once I got to know you, I learned things that I never imagined I would learn: philosophy and technique, the dedication to every detail, the artistry behind everything you do. Everything in that whole restaurant [Masa] was designed and touched by you. Nothing was ever overlooked; everything was important. I learned an overall love for what you do, a discipline and an enjoyment at the same time.

MA: In the beginning you were, but it showed us how much you cared. There were things like the family meals, the food that we cooked for each other and shared together. We would eat so well as a family, as a group of people who worked 15, 16 hours together every day. You cared about us. You showed us that you can’t cook well unless you eat well.

MT: You are very passionate about cooking. Whenever I screamed, you just listened. You tasted, and whatever it was, you would feel it. You would taste it. You would see it. You would understand it. What the shape was, what the beauty is—you would get that, very naturally. That’s very important if you are going to be a chef. Not too many people have this.

MA: There was no hierarchy in that kitchen. No one was more important than another person. In the Masa kitchen, there was no sous chef, no commis, no chef de partie. Everybody is just working as a team. That was the beauty of what our jobs were. I never made sushi, but otherwise, I did everything. I started cooking food for staff meals, cutting vegetables, working everything from the grill to the fryer to the pan. That’s the way I run my kitchen now.

MT: All the cooking, all the design—you got it fast. You’re a really good student.

MA: I think my whole restaurant is influenced by you. My restaurant is based on yakitori, which is a very basic and casual type of food, but it’s the same philosophy: taking one ingredient and expressing it simply. I try to keep it as clean and simple as possible, and use the freshest ingredients and be honest. I think that’s the thing I feel most connected with: All your food is very honest. There are absolutely no lies, nothing hiding. That’s the most important thing to me; that’s what I’m trying to do. Honest and simple and delicious food.

MT: When I was at Yardbird four months ago, I had everything: the chicken gizzards, the heart, yakitori. And of course, the big round of whole-corn tempura. It’s beautiful. When I do that dish, it’s one bite-size piece of corn. But you did round, beautiful, almost baseball-size corn tempura. Beautiful, beautiful.

MA: Our restaurants are definitely very different. But there is that similar honesty. I grew up with loud music, and all the things I put in my restaurant are things I grew up with. And I think the same goes for you: What you’ve been surrounded by is what influenced you. It’s just different generations.

MT: You have a very, very popular restaurant.

MA: The aesthetic is something I like. And I like to take people’s minds off things and put them at ease. I’m not trying to confuse people with flavors or textures or anything like that. Everything is very straightforward and clear: no garnishes that you can’t eat, nothing superfluous on the plate. If you read my menu it would say knee bone with salt and pepper, and that’s exactly what it is: a knee bone with salt and pepper, grilled over charcoal. It’s really that simple. And that’s what the design is, too.

MT: That idea—what’s comfortable for the customer is comfortable for me too—that’s an idea I think you learned from me. A very simple, comfortable place where everyone is enjoying themselves—that’s very much what your place is like.

Hey, Matt. I have something very special, a nice sauce for yakitori. I want to give you the recipe.

MT: I found something beautiful with herbs and a lot of different spices. It’s very, very incredible and very good for yakitori. I’ll see you [soon] in Japan; I’ll give it to you then.

In his restaurants, Masa Takayama approaches dining as a high art that engages all of the senses. Through his choice of beneficiary for the Robb Report Culinary Masters Competition, he expresses his wish to bring that kind of beauty—along with sustenance—to those struggling with hunger in America. “Everyone—children, teenagers, adults, and elders—should have the opportunity to enjoy food by vision, taste, and smell,” Takayama says. “And I applaud Feeding America for being a charitable organization that embraces this philosophy.”

A Chicago-based network of 200 food banks and 61,000 food-assistance groups across the country, Feeding America supplies food to more than 37 million Americans a year. Its network includes independent community centers, church food pantries, homeless shelters, schools, soup kitchens, and disaster-relief agencies—most every type of group involved in feeding the hungry. The organization is supported by charitable contributions from individuals and foundations, as well as by food donations from major corporations, such as the Kellogg Company, Kraft Foods Inc., and General Mills.

“We will move nearly 3.5 billion pounds of food this year,” says Ross Fraser, a spokesman for the organization. In addition to keeping food pantries stocked, Feeding America supports a number of hunger-relief efforts, including many focused on children. This year, the BackPack Program will supply 230,000 school-age children with food-filled backpacks on Friday afternoons, ensuring that the youngsters and their families have some form of nourishment over the weekends. The Kids Cafe program serves a hot meal at the end of each school day to supplement school lunch and breakfast programs.

Feeding America expects to raise $83.5 million this year, but “a couple of years ago, we raised $100 million,” Fraser says. “It was less than that last year, and it will be less again this year.”

Dollar donations are down at a time when the need for food is urgent: One in seven Americans lives at or below the poverty level and one in eight uses a food bank, Fraser notes. “Many of our groups will tell you there’s a record need for food,” he says. “We’ve been in emergency mode for a few years.” Feeding America receives no government funding (although many of the charities in its network do). Some of the money it distributes is used to buy food, but most of it pays for trucks, vans, warehouses, and after-school programs such as BackPack.

“The mission of Feeding America matches my belief that no individual should go hungry,” Takayama says. “Being an owner/chef of restaurants and knowing the beauty of the culinary arts, it pains me to think that there are people in our country that do not get to have the experience of a healthy, well-balanced meal.” —M.B.