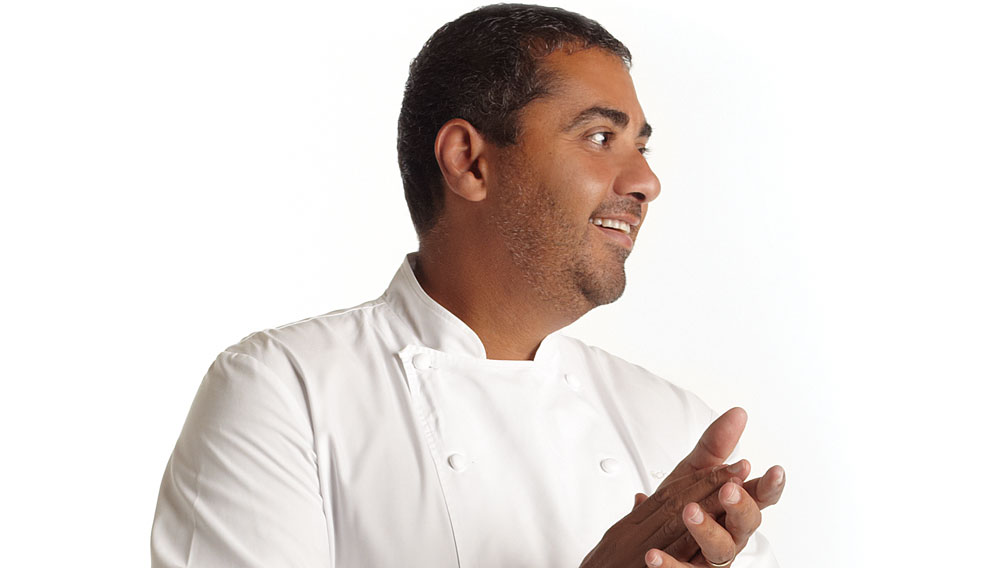 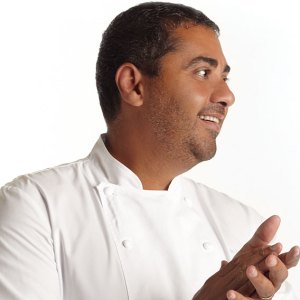 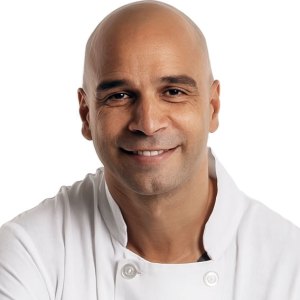 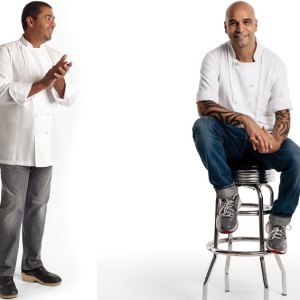 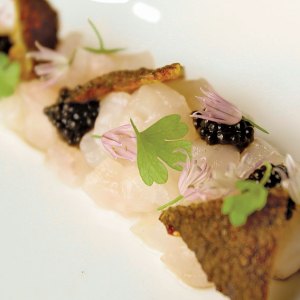 Mourad Lahlou remembers pressing his nose up against the glass of Michael Mina’s Aqua some 20 years ago, fascinated by what looked to be the most exciting restaurant in the city. When Lahlou, who had moved from his native Morocco to San Francisco to earn a master’s degree in economics, eventually saved up enough money to dine at Aqua, the experience proved to be a turning point in his life.

He gave up a career in finance and, without any restaurant experience, began to develop a modern version of the cuisine he grew up with. In 2001 he opened Aziza, a restaurant named for his mother; it serves Lahlou’s highly personal version of Moroccan food in a room free of belly dancers and the usual Moroccan-restaurant kitsch. Lahlou’s cooking came into its own after a few years, drawing rave reviews from local media and earning him a spot on the Food Network’s Iron Chef America (where he was a winner), a book contract for Mourad: New Moroccan (released last year to more raves), and, in 2010, a Michelin star.

Mina remained a major influence for Lahlou long after that fateful meal at Aqua. Lahlou, now 44, dined at Mina’s Bay Area restaurants and closely followed the chef and restaurateur’s career. He paid particular attention to Mina’s flagship eatery, Michael Mina, which opened in the former Aqua space in 2010. “I would go to Michael Mina and take my cooks, and we would dissect every little thing that they do there,” says Lahlou, who had still not met Mina. “His food is not the kind of food you just eat. You have to close your eyes and figure out what’s going on in your mouth and in your mind. It’s very complex.”

Mina—who was born in Egypt and who trained at the Culinary Institute of America in New York (with Charlie Palmer, another chef on the Robb Report Culinary Masters Competition panel)—has been a leading figure on the food scene since 1991, when he began creating innovative seafood dishes at Aqua. Since then, in addition to opening 21 restaurants in partnership with tennis star Andre Agassi, he has written Michael Mina: The Cookbook and garnered a long list of accolades, including a Michelin star for Michael Mina Bellagio in Las Vegas.

For his menus, Mina is devoted, he says, to “balance”: the idea that each dish should harmonize acidity, sweetness, spice, and fat, and offer complex layers of flavor and texture. In the dining room, he is equally devoted to creating a certain frisson—no “whisper joints” for him, where people are too nervous to talk and enjoy themselves.

Mina and Lahlou finally met about a year ago, when Mina dined at Aziza for the first time. The master was thrilled and inspired by his accidental apprentice. With superlative praise, Mina has nominated Lahlou as the best up-and-coming chef. —Michalene Busico

MICHAEL MINA: I had read about Aziza, and it sounded interesting. I had never eaten in a restaurant doing Moroccan food at the level that you do. So I went, and three courses into the meal I was sitting there and my jaw had dropped. I’m the first person to tell you I really enjoy a great product—really natural and all of that—but not when I go out to eat. When I go out to eat I want to be wowed. And it had been years since I was wowed with a meal like that.

MOURAD LAHLOU: It’s really humbling to hear that; you have no idea. When I first came from Morocco to San Francisco, there was this place that was buzzing all the time, and it was so grand and so fun inside, and I would watch from the sidewalk and peek in through the window and see all the people having dinner there. The restaurant was Aqua—and I remember so, so vividly saving money so I could eat there. When I finally went, it was the first time I was exposed to food of that level in terms of concept, flavor, how clean it was, how delicious. That was 20 years ago. I had no idea I was going to become a cook one day. I was just blown away.

Over all these years, I have been so much aware of what you are doing and how much you have changed the way Americans eat. I followed your success, when you opened in Las Vegas and Atlantic City. When one of those restaurants was reviewed, the picture with that review was a white tagine. Do you remember that, Michael?

ML: It was a tagine, a shellfish stew with cod. When I saw that tagine, it represented everything that I wanted to do. It captured the essence of the tradition by using the vessel and the method of cooking, but it also looked so elegant. You have influenced me in so many ways for a long, long time.

MM: That was Seablue in Las Vegas, 12 years ago.

ML: That is how far back I remember that picture! And to this day I remember what I ate at Aqua 20 years ago. There was an elegant sardine appetizer, and this beautiful shrimp; it was big, and it was wrapped in shredded phyllo. The whole thing was so crunchy and had so many textures and flavors. I even did a recipe for shrimp with shredded phyllo. To this day, it is one of my favorite dishes.

MM: To make an impression on somebody in a 12-course tasting menu—to me, that is the easiest thing to do. But give me something that’s not four bites. Give me something that keeps me interested for 30 bites, and I don’t want to put my fork down—now you’re talking about a dish that is substantial and has depth. There were numerous dishes that I had that night at your restaurant like that. I literally wrote down everything about them.

One of them was a duck breast. It comes out and it’s absolutely gorgeous. The duck was cooked perfectly. The skin was rendered perfectly and still had enough of a layer of fat to keep the caramelized flavor. You did a play on foie gras. You started with a caramelized piece of foie gras and then did one of the most interesting things I’ve seen done with foie gras in a long time: You had crusted it with sesame seeds and sunflower seeds and all these spices that just were the perfect balance of spice and fat. The dish had this amazing huckleberry sauce on it, which gave it the acid to cut through all this stuff. So now you have the spices, the really great acidity, plus caramelized parsnips to add a little sweetness, and a really nice bitter green that was just wilted. I probably use about as much foie gras as anyone in the country, and for 22 years, every three months, I’m coming up with a different foie gras idea, and this was probably the best foie gras dish I’ve ever had. Well, I didn’t copy all of it, but the foie gras dish I have on my menu right now is crusted in nuts in the same style.

MM: It is a spectacular dish, and it was one right after another that night. I think people are asking for more right now. I think that the real simple, farmers’-market philosophy is great. There’s a place for it, and there’s a clientele for it. It just isn’t particularly what I enjoy. I enjoy layering textures on the plate and really pushing up the flavor, utilizing and balancing the ingredients. And I really like seeing them used how you use them, where there’s a real thought process behind the complexity of the dish. What you are doing is really the most interesting food in this country right now.

About a year ago, Michael Mina celebrated two significant anniversaries: the first year of business for his namesake restaurant in San Francisco, and his 20 years of work in the culinary industry. “I wanted to do more than throw a party,” he recalls. “I wanted to give back to this community that has given me so much.”

He decided to transform the evening—a dinner at Michael Mina restaurant—into a benefit for All Stars Helping Kids, a Bay Area nonprofit group that was founded in 1989 by his friend, former San Francisco 49er Ronnie Lott. Mina raised $26,000 that night for the Redwood City, Calif., group and decided that “it just made sense to commit to them on a bigger level.”

Now, as a member of the charity’s advisory board, Mina continues to host fund-raising and networking events at his restaurants. He has also paved the way for some of his staff members to join the young-professionals board of All Stars Helping Kids, which he has chosen as his beneficiary for the Robb Report Culinary Masters Competition.

All Stars Helping Kids is based in the heart of the Silicon Valley, and the organization takes an entrepreneurial approach to distributing its funds, much like angel-investor and venture-capital groups do. Each year, All Stars awards grants—“seed money,” says program director Judy Wilson—to start-up nonprofit groups that provide opportunities to low-income children in the Bay Area.

In September, the organization granted a total of $150,000 to groups that are new and local. One of them was  Alpha Public Schools, which recently opened its first charter school in San Jose, with a technology-oriented curriculum. Every classroom is equipped with computers; students spend half their time on them and half in traditional instruction with teachers. The idea is to make learning more exciting and to provide computers to students who may not have access to them at home.

Another group receiving a grant this year is Wishbone, a crowd-sourced funding platform for providing summer school to low-income children. “Higher-income families spend about $5,000 a year on summer activities for kids,” Wilson says. “There are a lot of opportunities in summer programs—they can give kids a passion or a path in life.” On the group’s website (www.wishbone.org), donors can read about individual children and their interests before choosing to contribute to a particular child’s summer program—a model similar to the one employed by Kickstarter to fund budding businesses.

In addition to helping to raise money, Mina has also offered to provide business coaching to these new organizations, which may be run by only one or two people with little experience in fund-raising or business management. “Michael is so important,” Wilson says. “In many ways.”  —M.B.