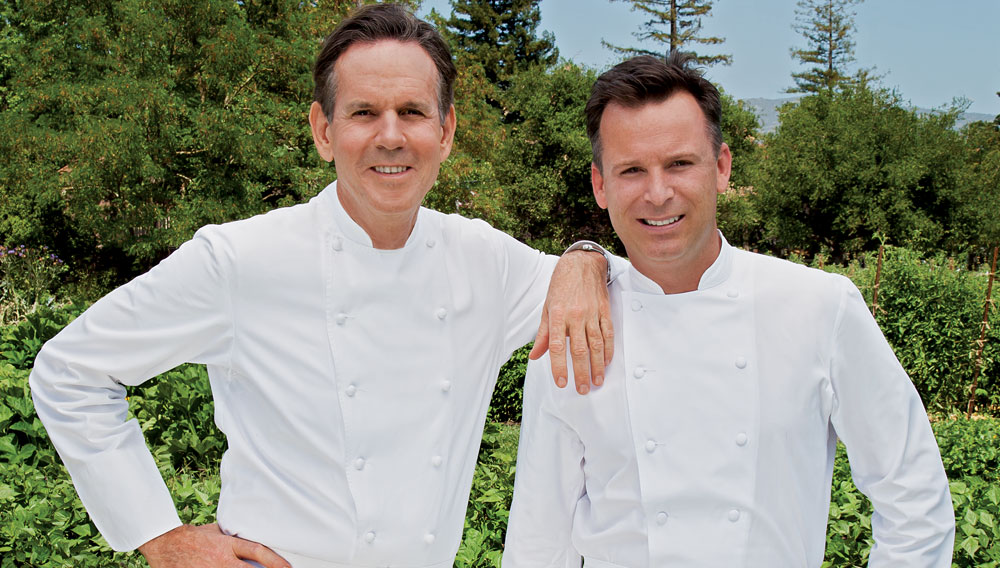 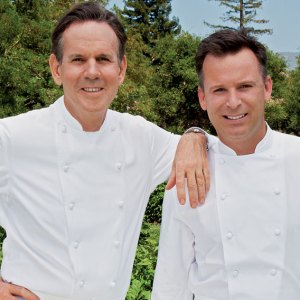 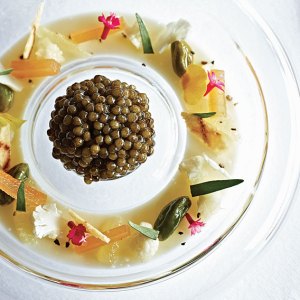 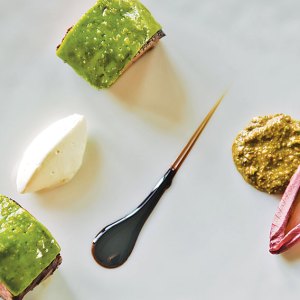 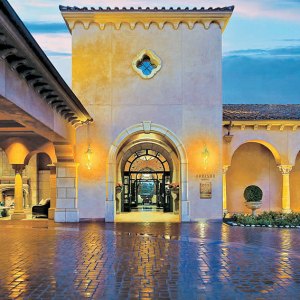 Thomas Keller is the most renowned, most revered, and most imitated chef in the country. His flagship restaurant, the French Laundry in the Napa Valley, is the culinary community’s Mecca, and its Manhattan spin-off, Per Se, consistently ranks among the top restaurants in the world. At both establishments, his French-by-way-of-California tasting menus—which might include such imaginative combinations as oysters served with tapioca and caviar—are intensely focused and meant to thrill and surprise over several hours at table. Alice Waters may be the godmother of the local-foods movement, but Keller has taken the concept to more ambitious heights by applying sophisticated cooking techniques and rigorous kitchen discipline.

He is the sole American chef to hold three Michelin stars at each of several restaurants; internationally, only Alain Ducasse and Joël Robuchon can claim this distinction. He has been named best chef in America by the James Beard Foundation, Time magazine, and countless other organizations. The French Laundry Cookbook has sold close to half a million copies since its publication in 1999, inspiring other chefs to add his signature butter-poached lobster to menus from coast to coast. The mostly self-taught chef also owns six restaurants and seven bakeries in the Napa Valley, New York City, and Las Vegas; moreover, he has published four other cookbooks, including one on sous vide. While he is known for his seriousness and precision, his résumé includes a consulting stint on the Oscar-winning animated film Ratatouille.

Keller is also a cleaver-sharp judge of talent, and he sees the future in William Bradley, the director and executive chef of Addison at the Grand Del Mar resort in San Diego. “Everybody who comes to my restaurant who will be in any proximity to San Diego, from Santa Barbara down, I tell them you’ve got to go to Addison,” he says. “It’s one of those hidden gems in our country.”

Like Keller, Bradley, 38, has been inspired by French masters such as Fernand Point to put a modern spin on classic dishes. Bradley’s duck is coffee-roasted with candied peanuts; his sweetbreads are served with leeks, cornichons, and caper confiture; and his coconut parfait is accented with poached pineapple, elderflower, and lime. In 2010, four years after opening Addison, Bradley was designated a Relais & Châteaux Grand Chef, one of only 160 in the world.

Keller and Bradley are also golf buddies, which gives them time for long conversations on the greens. As Keller says, “William’s food is just extraordinarily focused. It’s simple, but we all know simple is the hardest thing to do. When I eat there, I think: ‘Why can’t I cook like that?’  ” —Regina Schrambling

THOMAS KELLER  When did we first shake hands?

WILLIAM BRADLEY  In 2009. I was in Napa doing a stage at the French Laundry, and the day before I had lunch at Bouchon. I went up to introduce myself. The French Laundry is like Harvard, you know: You go there because of the atmosphere and the culture created there over the years. To go there was truly amazing—to see the culture, to see the connection between the chef and the restaurant. That was inspiring to me, as it was for those who work there and for those who go there just to eat. It’s a magical place.

TK  We didn’t rehearse that.

WB  I saw a restaurant that to me—I’ve been very fortunate to travel and dine all over the world—was unique. You have your own voice. We—and I’m speaking for colleagues and professional chefs around the country—we look at you as the Paul Bocuse of the U.S.

TK  One of the things I love about this profession, you know, is there are so many of us, and whether we’ve met or not, we have a real connection through what we do, or dedication for what we do. You really embrace that as well.

Addison is extraordinary. If you were in New York or Chicago or San Francisco, William, your name would be much more recognizable. Your food is of a level that is truly world class. The thing I love about it most is, there’s an emotional connection to it. It has reference points to it. It does exploit some of the modern techniques, as we all do, but at the heart of food, you have to connect to it. It’s about connecting to one’s soul, making people feel happy about eating your food, not challenging them.

A perfect example is, last time I had the crispy bass. I eat at a lot of places, but not a lot of times do I remember what I’ve eaten. With this, the skin was uniform; each morsel was as crispy as the next: the aroma, the flavor, the color. The gougère you serve to start off—with that beautiful cream with reduction of sherry—or the little side dish of mushrooms you serve with your beef. Each course is very, very thoughtful, extremely well executed, and the flavors are intense and focused.

WB  We both have a huge reference point in Fernand Point. There’s a quote from Ma Gastronomie that describes what I try to do on a daily basis: Refine simplicity. Simplicity is the hardest thing to do—to keep yourself from adding two more things and to get your young chefs to understand that if you have a bowl of perfect chanterelles, you don’t need anything else.

TK  There will always be icons in our profession. You think of Escoffier, Fernand Point, Chapel, Bocuse, Palladin. In this profession, we have so much depth and so much richness, it makes you really proud to be a chef, to be a cook. We can finally see some of the rewards of that in our country in the last 30 years. And we’re constantly trying to find better ways. We’ll go in tomorrow and do a little better than today; very seldom are there quantum leaps. For us, it’s chipping away.

We continue to support our fishermen, farmers, foragers, gardeners; they are the most important individuals in our equation. Talking about recipes is irrelevant. Poaching a lobster is easy. Roasting a lamb is easy. Braising carrots is easy. Doing it all together to make a composed dish night after night, week after week, year after year—that’s the challenge.

WB  I’ve always had the mind-set that it’s already all been done before.

A Place on the Podium

That Thomas Keller chose the Bocuse d’Or USA Foundation as his beneficiary for the Robb Report Culinary Masters Competition should come as no surprise, given his conviction that each generation of American chefs should be greater than the one preceding it. The 5-year-old organization trains an American team of chefs for the Bocuse d’Or, the international competition named for legendary chef Paul Bocuse that is staged every two years in Lyon, France.

American chefs have been entering the competition since it started in 1987, but “we had never, ever gotten on the podium,” Keller says, referring to the gathering place of the finalists. “We came up a doughnut. Zero.”

In 2008, Bocuse himself called Keller and Daniel Boulud, suggesting a formal path to a potential gold medal: Give aspirants brutal training in competitive cooking to help them prove that the New World has caught up to the Old. “He got on the phone and said, ‘You guys gotta do this. You can no longer have Americans be non-contenders in the Bocuse d’Or,’ ” Keller recalls. In 2009, the first American team that trained through the foundation placed sixth, the Americans’ highest ranking to date. Not coincidentally, that team was made up of chefs from the French Laundry.

Chef trainers and trainees meet at such facilities as the Greenbrier resort in West Virginia and the Culinary Institute of America to cook, cook, and cook some more with the goal of elevating their cuisine to judge-dazzling levels. One of the rising-star chefs in last year’s Culinary Masters Competition, Gavin Kaysen of Café Boulud in New York City, helped coach the 2013 team, which placed seventh out of 24 in Lyon. Currently, William Bradley serves as a culinary council member for the foundation.

“Some people ask what the big deal is—why we need to compete in Lyon,” says Keller, who is president of the foundation. “I think we do. We have done so much more with our profession, and this is another level of accomplishment for American chefs. It’s a level of international respect.”

Money raised for the Bocuse d’Or USA Foundation pays for the chefs’ training, travel expenses, and ingredients. Beyond the competition, the organization also supports the training of and scholarships for young chefs around the country.