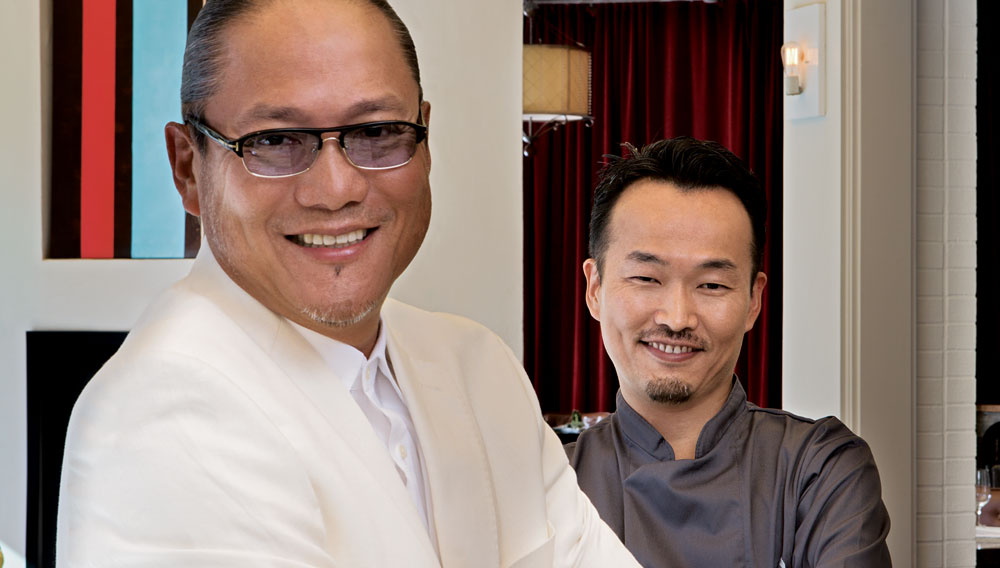 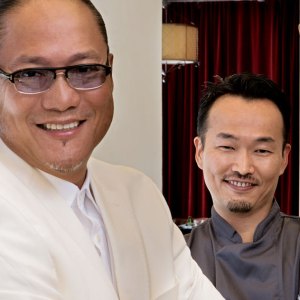 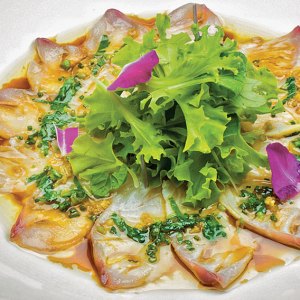 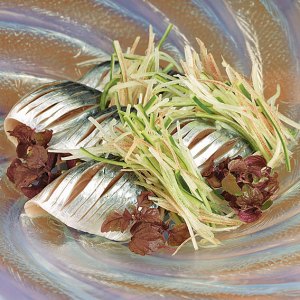 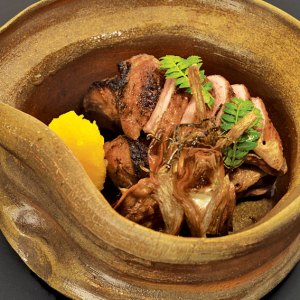 Long before Masaharu Morimoto became Iron Chef Morimoto—and vanquished competitors such as Bobby Flay on television’s Iron Chef and Iron Chef America—he spent years studying sushi and kaisekiin his native Hiroshima. Those formalculinary genres were too limiting for the wildly inventive Morimoto, however, and in 1985 he moved to New York City to develop his own style of food, a thrilling blend of East and West.

In 1993 he became the executive chef at the private Sony Club, a move that had the city’s dining cognoscenti scrambling for an invitation. Soon after, Nobu Matsuhisa recruited him for Nobu New York, and he became the restaurant’s first executive chef. He went on to open his first Morimoto restaurant in Philadelphia in 2001, and since then he has expanded his enterprise to include nine restaurants in New York, the Napa Valley, Mexico City, and Mumbai, among other locations. He has also developed specialty lines of beer and cutlery.

With the exception of sushi, Morimoto says that his fare is not purely Japanese, and indeed, he is famous for such dishes as a savory “pizza” topped with raw tuna, jalapeño, red onion, olives, and anchovy aioli. This type of nimble, cross-cultural creation had a powerful influence on another classically trained Japanese chef: Yoshinori Ishii, Morimoto’s nominee for the Robb Report Culinary Masters Competition. Ishii attended the Osaka Abeno Tsuji Cooking School and then worked for nine years at Kitcho, an exquisite Michelin three-star restaurant in Kyoto. There he learned the subtleties of kaiseki, the intensely seasonal multicourse menu that dates back centuries and was the inspiration for modern tasting menus.

But Ishii, too, felt the urge to explore new culinary frontiers. In 1999, he packed his knives and fishing rods (he is also a skilled fisherman, who chronicles his adventures on a blog at www.kaiseki-master.blogspot.com) and obtained a position as the head chef at the Japanese embassy in Geneva and then at the embassy in New York City. In 2006, Morimoto hired him as the omakase chef at Morimoto New York. For four years, Ishii unleashed his own creativity in his nightly tasting menus there before moving to London to run his own restaurant, Umu, an elegant spot in the Mayfair neighborhood. Ishii, now 42, crafts a very personal version of his native cuisine using local and Japanese ingredients. He takes a kaiseki approach, creating not just the menu but also the entire experience: Dishes are served on ceramics he makes, plates are decorated with his calligraphy and wood-block artwork, and tables are adorned with his flower arrangements. Sometimes he even catches the fish. He earned his first Michelin star in 2010 and has retained it ever since. “I don’t know how to separate work from my hobbies,” he says with a laugh. —Sonoko Sakai

YOSHINORI ISHII  I haven’t thanked you enough for all that you’ve done for me.

MASAHARU MORIMOTO  Oh, no, not to worry. It’s a pleasure. For a long time, I’ve been exploring a cuisine that combines different cultures and trying to dispatch it into the world. How long have I known you, Ishii?

YI  About eight years. I was working as head chef for the Japanese embassy in New York and heard you speak at a culinary seminar. When my contract with the embassy was up, I wanted to stay here, and that’s when a friend introduced me to you. You helped me get a working visa.

MM  Since 9/11, it’s been difficult for Japanese restaurants to get skilled chefs to come from Japan. When I saw your résumé, I wanted to hire you right away. Based on your track record, it was easy to obtain an O visa.

YI  An O visa is an artist visa. I am not an artist; I am a chef, and it would have been impossible to get the visa on my own. In order to qualify my credentials as an artist, I needed someone powerful like you—and you asked your celebrity-chef friends to write letters of recommendation as well.

When I moved to the United States, I only knew about the narrow and strict culinary world of Kyoto. When I saw your dynamic presentation and cuisine, it was something that didn’t exist in my world. And when I saw that people were really happy eating your food, I began to feel that this is perhaps the true meaning of kaiseki—to make people happy. I realized I needed to break the traditional ideas and techniques I was rigidly bound by. Your cuisine had the impact to make that happen.

MM  When I put you in charge of the omakase section at Morimoto in New York, I don’t remember asking you to do things this way or that way, but I understood where you were coming from. And your style of cooking actually turned out to be very flexible.

I like to play on the meaning of some Japanese words like omotenashi, which means “to entertain.” I also define it as having no facade. Do what you want. There are all kinds of culinary disciplines, and you can do what you want when you come here, but you need to understand that people have different tastes and customs. As a Japanese person, it is basic to introduce Japanese culture to others, but how to do it is the question. You can’t just serve raw fish with soy sauce and expect everyone here to appreciate it. Even in cities like New York, Los Angeles, Seattle, San Francisco—there are still people who can’t handle raw fish. Our role is to open the doors a little wider for people.

That’s especially true for you. London is a little behind those other cities, and I know you’re having a hard time getting certain ingredients, like bonito flakes. Weren’t you using ham to make dashi [broth] before?

YI  Yes, I was using Ibérico ham and tomato.

MM  You got the umami from ham and tomato—that’s great! You wouldn’t have come up with such an ingenious idea if you were working in Kyoto. This is different, but it works.

YI  When I first arrived in London, I found out that the European blue lobster tasted delicious, but I couldn’t find a Japanese recipe that would complement it. So I tried to recall a good lobster dish that I had eaten in the past, and the only one I really loved was the Lobster épicé that you had on your menu. The spicy shell is roasted to a crisp; the inner meat is on the rare side. So I took your recipe and rearranged it my way. My dish is called wild Scottish lobster, tofu bisque, homemade shichimi pepper. It’s like a lobster miso soup. I make a puree of tofu and a rich broth using the lobster head. I also roast the lobster until it’s nice and crispy and serve it on the side of the tofu bisque. It’s one of the most popular dishes at Umu, and if I didn’t have a chance to work with you, I would have never been able to create it.

MM  A lot of people call what we do “fusion.” I hate the word: Fusion equals confusion. It has a tendency to attract people with mediocre skills. They think,“I could do that. Just change it. Change anything.”But it’s only when you have a foundation to stand on that you can move between cultures and change cuisines. You have that foundation.

Masaharu Morimoto’s goal of making people happy through food extends far beyond the dining rooms of his namesake restaurants. The chef is also devoted to a number of nonprofit organizations that endeavor to end hunger, especially the Food Bank for New York City, his choice of beneficiary for this year’s Culinary Masters Competition.

Although New York is the capital of fine dining in the United States, the city is also home to 1.4 million people who rely on soup kitchens and food pantries to provide sustenance for themselves and their families. The Food Bank for New York City, which was founded 30 years ago by the activist Kathy Goldman, is one of the largest food banks in the country, with a current annual operating budget of about $80 million. Its pantry is filled with donations of food from government agencies, grocers, wholesalers, and others, as well as with purchases funded by corporations and individuals. Operating primarily from a 90,000-square-foot warehouse in the Bronx, the Food Bank—with the assistance of five staff nutritionists—collects, stores, and distributes more than 60 million pounds of food every year, including fresh produce.

“It’s a huge space,” says Morimoto, who has worked in the warehouse and provided guidance on storing and preparing food professionally. “I do demonstrations so people can learn how to organize the fridge, cut vegetables efficiently, clean fish, and make rolled sushi.”

Morimoto has also served on the organization’s culinary council since its inception in 2010. The council, chaired by chef Mario Batali, comprises dozens of the city’s culinary elite, including master chefs Daniel Boulud and Jean-Georges Vongerichten. In this role, Morimoto has helped raise money for the organization by cooking at culinary events, donating gift certificates, and distributing food on Independence Day and Thanksgiving.

The Food Bank’s provisions are distributed throughout the five boroughs and help deliver a staggering 400,000 meals a day. In addition to furnishing daily sustenance to clients, the group works to empower those it serves through nutrition-education programs and financial-support services that assist in obtaining benefits through the Supplemental Nutrition Assistance Program and filing tax returns. —S.S.