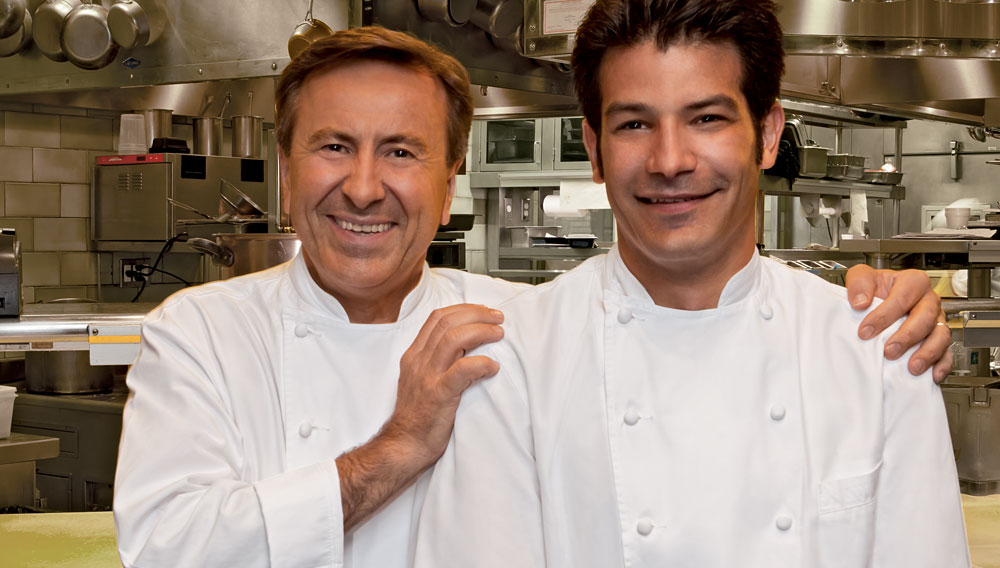 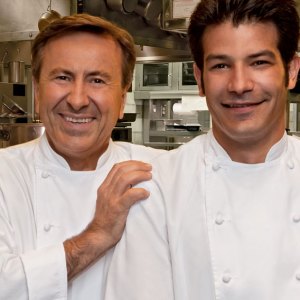 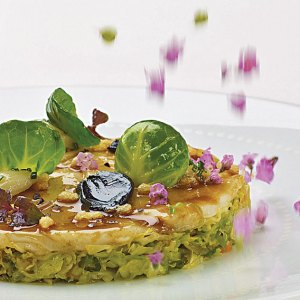 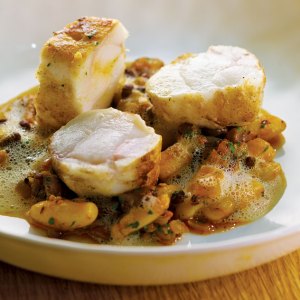 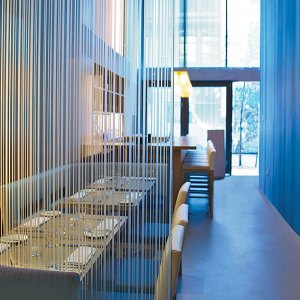 Daniel Boulud savors the Portuguese inflections in the cuisine of George Mendes.

To hear Daniel Boulud tell his story, he is a Lyon farm boy at heart—a farm boy who began cooking in a Michelin two-star kitchen in the city at age 14; worked for Roger Vergé, Georges Blanc, and Michel Guérard; and rose to culinary stardom in New York at Le Cirque in the late 1980s. When he opened his own restaurant, Daniel, in 1993, he initiated a new age of French-American cuisine. His signature is one of the world’s most imitated dishes: sea bass wrapped in paper-thin slices of potato cooked to a crisp, served with an intensely reduced Barolo sauce. And of course you can drink red wine with fish: Daniel Boulud said so.

Twenty years after it opened, Daniel remains the flagship of Boulud’s Dinex Group, which operates 14 restaurants around the globe, including Midtown Manhattan’s DB Bistro Moderne, where Boulud ignited the gourmet hamburger craze in 2001 with a baseball-size burger packed with braised short ribs, foie gras, and truffles. Now priced at $32, this classic remains on the menu. Boulud has shared his inspirations in eight recipe-filled books, including Daniel: My French Cuisine, which is being published in October. Even today, the self-proclaimed farm boy lives over the store—though his Upper East Side digs above Daniel are anything but rustic.

The chefs who have trained under Boulud are legends in their own right—Michael Anthony of Gramercy Tavern, Nicholas Wilber of the Fat Radish, and the pastry genius Dominique Ansel, to name a few—but Boulud chose George Mendes, who has never worked for him, as his nominee for this year’s Culinary Masters Competition. Like Boulud, Mendes, 41, has roots on the farm—and again like Boulud, he is transforming American cooking by infusing it with his heritage. The son of Portuguese farmers who moved to the United States two years before he was born, Mendes grew up in Danbury, Conn., where his parents kept a vat of salt cod soaking in the garage.

On graduating from the Culinary Institute of America in 1992, Mendes went to work for his first mentor, David Bouley, at Bouley in Tribeca. Two stages with Alain Passard at L’Arpège in Paris drilled home the importance of presenting perfect ingredients simply. Later experiences with Roger Vergé and Alain Ducasse—and a stint   cooking the French luxe cuisine of Lespinasse in Washington, D.C.—honed Mendes’s command of classic technique in modern kitchens.

But his time with the Basque chef Martín Berasategui in 2003 seems to have influenced his own cooking style the most. He began to explore the flavors, ingredients, and techniques of Spain and Portugal, and soon after he opened his Manhattan restaurant, Aldea, in 2009, Mendes began developing a personal cuisine that brings the tastes of Iberia to the New World. His signature dish, arroz de pato, presents rice baked with succulent duck confit, chorizo, and black olives and served with an orange puree and sliced duck breast. He cannot take it off the menu: It is his potato-wrapped sea bass with Barolo sauce. —David Lyon

GEORGE MENDES  My second meal in New York City was at Daniel. I was a young cook, just graduated school. I saved some money and took my girlfriend. I still remember that meal. I had an herb ravioli.

GM  Then I had a squab dish. The leg had a farcie, and it was wrapped in something like phyllo and served simply with a mixture of haricots verts and lima beans. What hit me so hard was how powerful the dish was. I felt like I was eating my parents’ garden vegetables. I can honestly say that you are someone I aspire to be like someday. I have a long way to go.

DB  Cooking is a very long journey. For me, it’s been four decades. It’s going to be a beautiful journey for you. I don’t know what will materialize, but I want to give you the right encouragement. The cuisine you are doing today has a lot to do with your heritage. It is always ingredient driven and technique driven, but with a lot of soulfulness in the food.

GM  That is where I think we are similar. You also have a lot of family and cultural ties in your cuisine. I think that chefs’ styles should always tell a story and have a historic and authentic background. Anybody can sauté a piece of fish. But what you put with it or how you do it and the reasons why tell a bigger story.

DB  When I eat at your restaurant I have to have the suckling pig. I come from a farm, and I’ve eaten a lot of suckling pig in my life, but you fragment the pig in different textures. I also always want something with bacalhau [salt cod]. I always want something from your Portuguese heritage and from your Spanish inspiration. Not the spontaneous, coming-back-from-the-market dishes, but the ones that are more soulful.

GM  I first staged with Alain Passard in 1994. It was in his kitchen that I saw bacalhau for the first time outside of a Portuguese restaurant. The last time I had seen salt cod was at my mother’s house. But I go into a three-star Michelin restaurant, and Alain Passard is doing something with it, and I’m like, “OK, what is going on here?”

DB  It takes me back to the time when they had to preserve everything, and there were strong associations of taste and flavor. That is the soul of forgotten cuisine that needs to be kept alive. I think you always love to put a little bit of that in your cuisine.

GM  We make our own bacalhau. We buy the cod fresh. To watch the product transform from something that is very bland, white, and flaky into something that has fermented a little bit and has more bite and flavor is a very appealing thing.

DB  That is the real Portuguese umami.

GM  Portuguese umami is right! I’ve got to tell my mother that one.

DB  Do you do paella, George?

GM  A lot of times the duck breast that we do, arroz de pato, is called a paella, but it really isn’t. I started thinking about rice dishes that my mother cooked with rabbit or with rice and beans. In this very old traditional Portuguese cookbook, I found a recipe that says, “Ingredients: duck, water, chouriço, and olives.” And then it goes, “Procedure: find the duck, kill the duck, pluck the feathers, and bring a pot of water to a boil. Then cook the duck, add rice, chouriço, and olives, and serve it at the table.” I took the idea and turned it into something more complex.

DB  The dish is really vibrant. It’s the authentic, traditional idea made to work on a menu. I think we are very lucky to have you in New York. You are going to inspire and influence a lot of young chefs.

DB  Not much. Just keep cooking.

Daniel Boulud’s palate may have been tutored in France, but after more than three decades on the Manhattan restaurant scene, he thinks of New York as home. Providing nourishment to some of the city’s senior residents is the mission of Citymeals-on-Wheels, Boulud’s beneficiary for the Robb Report Culinary Masters Competition.

“They focus on an important group in the community,” Boulud says, “the elderly who may not be able to cook or shop anymore—who may not have family to care for them, but who still want to live in their homes and be a part of the community.”

Citymeals-on-Wheels was founded in 1981 by the restaurant critic Gael Greene and the late chef James Beard. After reading newspaper articles about the city’s seniors going hungry on Thanksgiving Day, these friends were moved to take action. Then as now, the Department for the Aging provided meals Monday through Friday—but not on holidays. Over a single weekend, Greene and Beard raised $35,000 from their colleagues in the food and restaurant industries, and today the group’s supporters form a who’s who of the city’s top chefs. Last year, Citymeals prepared and delivered more than 2 million meals to nearly 17,000 elderly New Yorkers. It will require $19 million to do the same this year.

Of the many chefs who support the program, however, Boulud stands out. In 1999, when he moved restaurant Daniel to the grand Mayfair Hotel, he celebrated with a dinner benefitting Citymeals. “From there,” he recalls, “it has become a yearly tradition.” In fact, says Beth Shapiro, executive director of Citymeals, Boulud’s annual Sunday Supper benefit at Daniel is one of the organization’s top three fund-raising events. “He raises between $500,000 and $900,000 for us every year,” she says. “Every New York opening of one of his restaurants, he does something to support Citymeals.”

Boulud has also served on the board of directors at Citymeals since 2003, and he became a copresident in July. “From his heart, he cares about the people we nourish,” Shapiro says. “Last fall, after Hurricane Sandy, he had all the chefs in each of his New York restaurants cook 50 to 100 meals. He and each of the executive chefs went with us to deliver them.”

Now Boulud is planning to make that response a regular event, asking the many famous chefs who have come up through his kitchens to do what he did. “The idea is, once a month, one or two ‘friends of Daniel’ will cook meals for our elderly and go out on a delivery,” Shapiro says. “They will see firsthand the real value of a simple meal.”  —D.L.