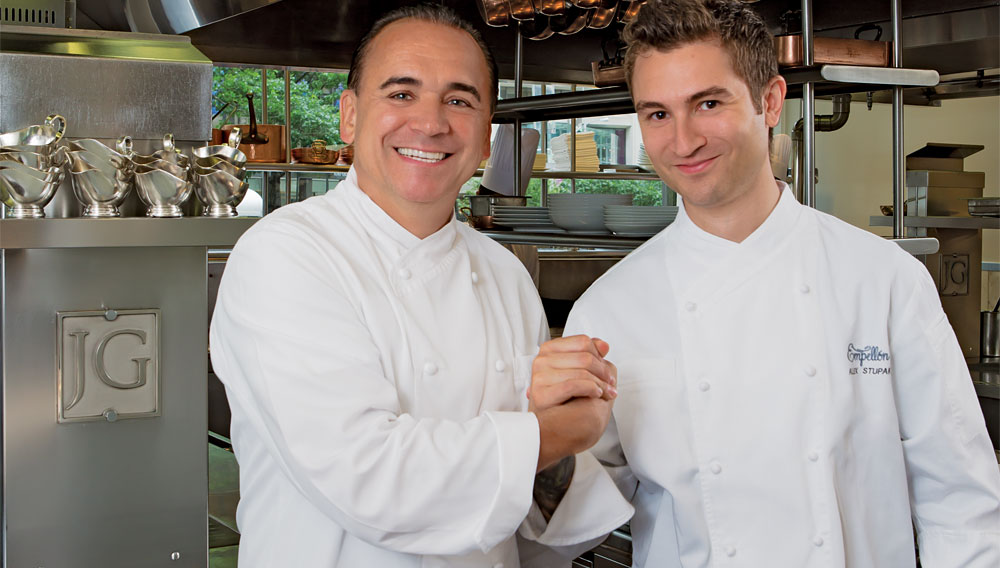 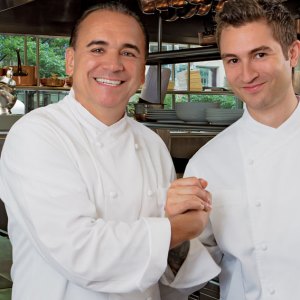 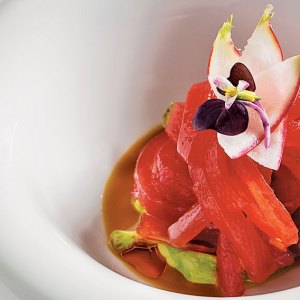 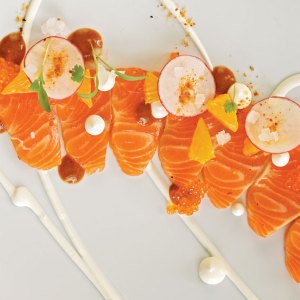 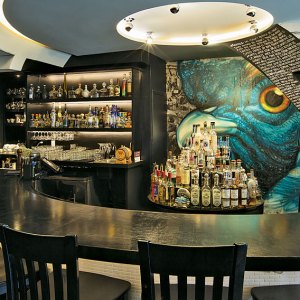 Like Jean-Georges Vongerichten before him, Alex Stupak is moving a classic cuisine in a fresh direction.

It is no exaggeration to state that Jean-Georges Vongerichten revolutionized French cooking in the United States. The nouvelle movement had already lightened up the classics by the time he became the chef at Lafayette in the late 1980s, but he added new dimensions by switching from sauces to flavored oils, broths, and vegetable juices; incorporating Asian accents and ingredients; and generally adopting a more playful approach to this genre of cooking. In 1991, he became the first four-star chef to break away from formality and open a bistro, JoJo. The establishment quickly became a benchmark not just for its clever menu—which included a much-imitated molten-chocolate cake—but also for its relaxed townhouse location and jazzy ambience, which took the starch out of fine dining.

Twenty-two years later, Vongerichten oversees 38 restaurants around the world, including 10 in New York City alone. Jean Georges, his flagship venue, holds three stars from Michelin and is among only five restaurants with four stars from The New York Times. He has published five cookbooks and won awards from the James Beard Foundation, Gayot, and many other organizations.

Vongerichten began cooking in his native Alsace 40 years ago at the age of 16, training under Paul Bocuse and Louis Outhier. But working in Bangkok, Singapore, and Hong Kong changed his life and palate. And while he is known internationally for his fluency with flavors from East and Southeast Asia, his latest project, ABC Cocina, offers his creative take on Latin cuisine. Vongerichten’s inspiration for this particular restaurant was a young chef named Alex Stupak, who is also his Robb Report Culinary Masters Competition nominee.

The 33-year-old Stupak is reimagining Mexican cookery at Empellón Taqueria and Empellón Cocina, eateries that he opened with his wife, Lauren Resler, in the last three years. He earned acclaim for his prowess with pastry under such modernist chefs as Grant Achatz, at Chicago’s Alinea, and Wylie Dufresne (a Vongerichten protégé), of WD50 in New York, before shifting to the savory side at Empellón. At Empellón Cocina, guacamole comes with bacon and a black-pepper salsa; tacos stuffed with short-rib pastrami are served with pickled cabbage and mustard-seed salsa; and queso fundido incorporates lobster and fried tomatoes. Empellón, which is Spanish for “push” or “shove,” is an appropriate moniker, given that Stupak is impelling Mexican cuisine in a whole new direction.  —Regina Schrambling

JEAN-GEORGES VONGERICHTEN  You are a big inspiration to me. I love your flavors, the balance of the way you do things, the texture of the tacos, the combination of flavors. Empellón is probably the restaurant I go to most in New York City.

ALEX STUPAK  This is all surreal for me. I came to New York like seven years ago, and so much has happened.

JGV  Only seven years ago?

AS  I moved here from Chicago, but I’m from Massachusetts and wanted to come back to the East Coast. In my first job as a sous-chef, they asked me if I could do pastry when they had to let the pastry chef go. I faked it [as a pastry chef] with Ken Oringer, then Grant Achatz, and then with Wylie at WD50. I swore I wouldn’t leave there until I got my own place. I wanted to go back to savory but do it in a very different way.

AS  To me, creating something new was most important. I had to do something very different. I had never had the opportunity to cook what I felt like eating. Working in these hypermodern restaurants, the food had to be delicious but had to be a weird flavor combination or a new technique. I enjoyed that pressure. But sometimes I like just learning about a dish and making it well.

AS  I began eating it more. My wife is Mexican, and she’s a chef as well. She’s from L.A., and she took me out to eat at a Mexican restaurant there. I had a fresh tortilla taken off the comal and served right there. It was epiphanic. It’s like, you live in America and have had baguettes and croissants, and then you go to France and taste them and realize you have no idea what French cooking is. That’s what that tortilla was. Then I took a vacation to Oaxaca, and that changed everything. There are chilies only of that region, certain spices, avocado leaf—it was like being in a kitchen the first time someone hands you a black truffle.

JGV  I think the whole world is hooked on those flavors.

AS  The other part of “why Mexican?” is that I think it has more places to go. If you sit in a French restaurant, they’re making beurre monté, mincing shallots—they’re using French technique; but if they throw in some lemongrass or tamarind, people don’t think twice about it. It’s the same with Italian: It can be anything. But Mexican still means omni-regional, guacamole-driven cuisine. So with Mexican, I could stick with it forever. There’s so much to be done with it. I’m starting to look for a third space.

AS  This is why chefs expand. Sometimes your team gets so good that you have to expand or you’re going to lose them. Sometimes you have a menu with dishes you can’t take off—you have to open a new house to do anything new.

JGV  I always say it’s easier to open a new restaurant than to change the menu.

AS  The first year, I was very much “change for the sake of change.” But you begin displacing what people wanted in the first place.

JGV  They complain, “They took this off the menu.” At JoJo, 50 percent of the menu is the same as when we started 23 years ago! The chickpea fries, the chicken with olives and ginger. I’m sick and tired of it, but it’s like a riot if I take it off. But then, I go to Nobu for the same 10 dishes. The day they take them away, I don’t go back.

AS  You can’t ignore your neighborhood. And New York City is so competitive as well. It’s why I love working here. Every day you hear about a restaurant opening up. I eat everywhere.

JGV  What is beautiful today is how social media is really helping the restaurant business. Before, you were depending on two newspapers, two magazines. Now, it’s the people’s voice. You just have to have someone listening to what they say.

AS  If you put social media in your own hands, you can control the message. We just started a Tumblr page [http://empellon.tumblr.com]. Every Wednesday, a video goes up of me making a dish so I can explain it my own way. You can see it and think, “That looks delicious,” but also think about why I’m making it.

JGV  You make the videos yourself?

AS  Yeah. Things are changing. Restaurants are not like, “I need a sommelier, I need a pastry chef.” I need a full-time videographer and designer so I can produce these things quickly. The economics of the kitchen are changing. Less and less restaurants need a sommelier to sell wine, a pastry chef to sell dessert. You need Twitter, Tumblr, and a website. And you need to do it with a chef’s integrity.

Lessons for a Lifetime

Jean-Georges Vongerichten has a restaurant empire that stretches from Chicago to Shanghai to Doha, Qatar. But the charity that he chose to be a beneficiary of the Robb Report Culinary Masters Competition is very close to home: Just Food in New York City.

This ambitious organization connects farmers and urbanites through food and, in some cases, turns urbanites into farmers. Just Food was founded in 1995, and Vongerichten has been working with the charity for six years. “It’s local and sustainable,” he says, “and it puts people together in different neighborhoods.”

Just Food empowers low-income New Yorkers by teaching them how to grow food and raise chickens, cook with fresh local ingredients, run farmers’ markets and community-supported agriculture programs, and advocate for social change, whether by protecting funding for food stamps or supporting campaigns for labeling genetically modified crops. In its 18 years, the group has helped establish 113 community-supported agriculture programs, giving nearby farmers a guarantee that they will have buyers for what they plant—and delivering local produce directly to 38,000 New Yorkers.

Just Food has also trained residents to start and run two dozen farmers’ markets in four of the five boroughs, selling produce from both urban and rural farms. A program called Fresh Food for All connects farmers with 48 food pantries and soup kitchens in the city. A farm-to-food pantry program financed through the New York State Department of Health lets farmers get paid up front, at the beginning of the growing season. Once a year, the organization leads field trips, busing volunteers and beneficiaries of emergency food providers to farms so that they can see how produce is grown and harvested. And the Farm School program has taught New Yorkers how to be urban farmers and to advocate on behalf of their communities.

The charity adheres to the belief that, if you teach a person to fish, so to speak, you feed that person for a lifetime. Amy Blankstein, director of grants and communication, says the effort requires more than the group’s 17 full- and part-time staff members are able to do alone. “It’s about training community members so they have the tools to do it,” she says. “They have talent and knowledge; we work with them to help themselves.”

Vongerichten was one of the first chefs to get involved with Just Food’s Let Us Eat Local annual benefits, Blankstein notes. As the chef himself says, “It’s a great organization doing both food and environmental-justice work.”  —R.S.