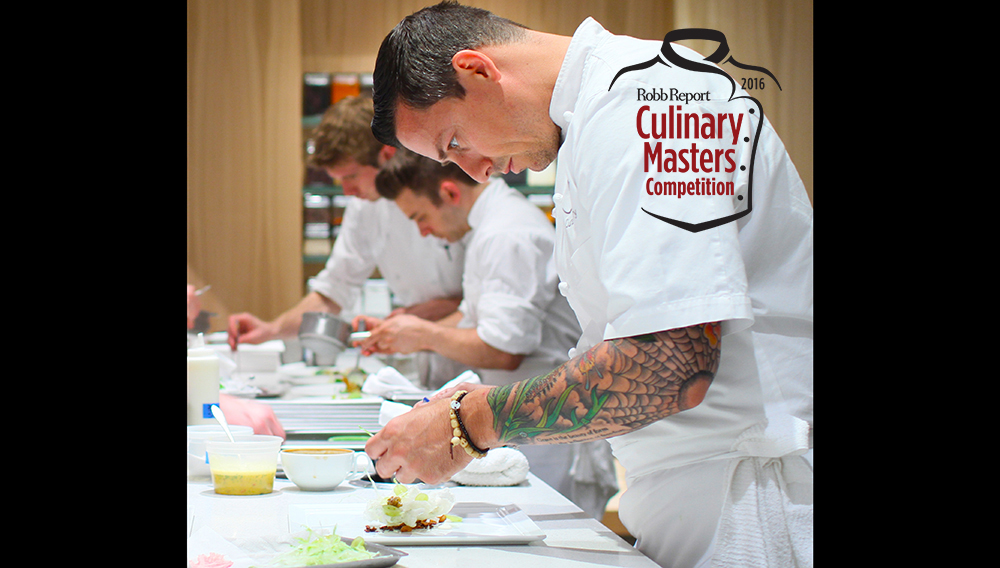 Curtis Duffy knew at a young age that he had a passion for cooking: a middle-school home-economics class sparked his tremendous love of the kitchen. After completing culinary school in Ohio, he relocated to Chicago and diligently worked his way through the city’s top dining establishments, starting with three years in Charlie Trotter’s kitchen. He proceeded to become the pastry chef at Trio, the chef de cuisine at Grant Achatz’s avant-garde Alinea, and the executive chef at Avenues at the Peninsula Chicago, where he was awarded two Michelin stars.

With his sights passionately set on a third star, Duffy left Avenues in mid-2011 to begin developing his own restaurant, Grace, which opened in late 2012. This refined, modern restaurant in Chicago’s trendy West Loop neighborhood is a showcase for Duffy’s exquisitely intricate style. It holds just 17 tables, each booked only once for the evening. And the menu offers two 8- to 12-course tasting menus, one focusing on vegetables (Flora) and the other on meat and seafood (Fauna).

Each meal begins with four jewellike amuse-bouches that might include a segment of satsuma tangerine encased in a glassy shell of sugar and smoked paprika, or a tiny gougère filled with smoked banana and cilantro. The later courses are equally dramatic: poached chestnut, for example, on the Flora menu, consists of an ultrasmooth chestnut puree served with roasted-almond-milk custard, a crisp and salty black-truffle meringue, red sorrel, and slivers of raw chestnut and fresh black truffle. The course’s counterpart on the Fauna menu is Miyazaki beef, an ultra-marbled premium-grade meat from Japan. Duffy quickly grills it three times over high heat, layering it with a series of seasonings: first gray sea salt, then sake, and finally soy sauce. The result is toothsome and deeply beefy, but it is not enough for Duffy. He serves it with a focaccia made with liquefied Miyazaki fat.

Such precise attention to detail has amassed much attention for Duffy; among the accolades, Robb Report awarded Grace its top restaurant honor in the 2013 Best of the Best issue, and the establishment has since received two James Beard award nominations. Most importantly, in 2015 Duffy achieved his essential aspiration: three Michelin stars. The chef’s blazing dedication to Grace’s success is so renowned that it has become the subject of a moving feature-length documentary that premiered at the SXSW film festival in March.