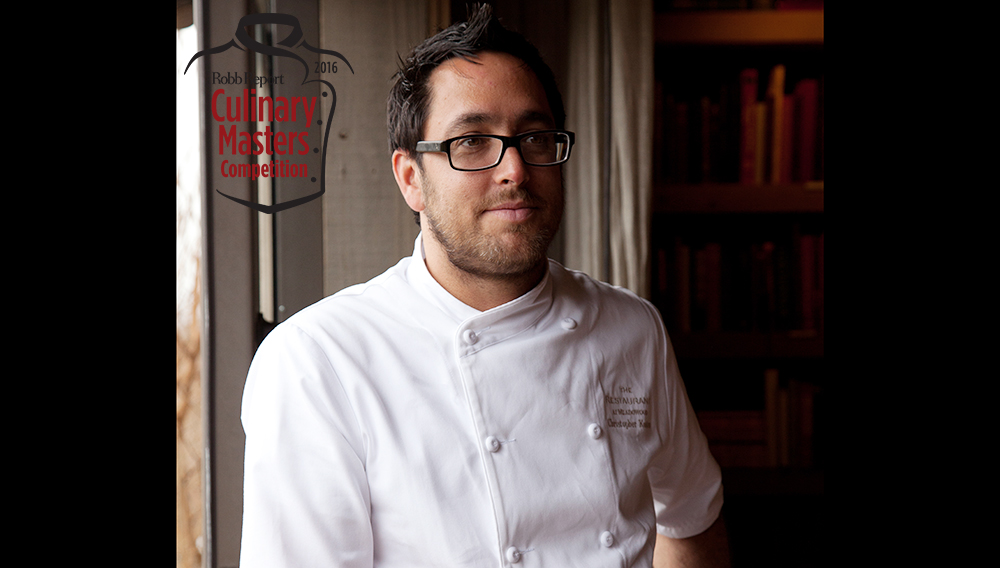 Technique is imperative—in fact, it must be flawless. But the food still comes first. So declares the unconventional Christopher Kostow of the Restaurant at Meadowood, who became a Michelin-starred chef before the age of 30 and was named Best Chef in the Western United States by the James Beard Foundation in 2013. “Some chefs use technique to make things look unbelievably unique,” he says. “We put that on its head and say, ‘We have all this ability and know-how and tools. Why don’t we use technique to make food taste unbelievably good?’”

The Chicago native’s ideology grows from his degree in philosophy as well as his extensive culinary experience. After training for several years in France at respected kitchens such as Le Jardin des Sens in Montpellier, he returned stateside and began working as a sous chef under Daniel Humm at Campton Place Restaurant in San Francisco. Soon afterward he became top toque at Chez TJ in Silicon Valley, gaining recognition for his avant-garde style and earning two Michelin stars for dishes such as a dark and intoxicating maitake consommé—served in a teacup with the mushrooms encased in a “tea bag.”

When he finally arrived at Napa Valley’s elegant Meadowood resort in 2008, Kostow injected an inventive energy into the menu; the next year, he was named one of Food & Wine’s Best New Chefs. Part of the indulgent 250-acre Meadowood property in St. Helena, the Restaurant is widely known for its ever-evolving 12-course tasting menus, mindfulness of locally grown ingredients and locally produced products, and show-stopping presentations. In 2010 Kostow garnered a rare four stars from the San Francisco Chronicle, and by 2011 he had elevated the Restaurant to three Michelin stars.

Kostow is the author of A New Napa Cuisine (2014), which was awarded Book of the Year by the International Association of Culinary Professionals for its details on the chef’s connection with the region. Here amid the lush terroir of California’s wine country, he takes pride in the garden he helped establish at Meadowood, where the staff grows herbs, vegetables, berries, and more for the restaurant. “I sit down every season with our gardener and we discuss what we’re going to plant and how much we need. That way,” he says, “I can look forward to my menus for the season.” In the spirit of preserving the character of his adopted home, Kostow has chosen the Land Trust of Napa County, a community-based nonprofit dedicated to protecting the land, to benefit from the Culinary Masters dinner.

The Restaurant at Meadowood