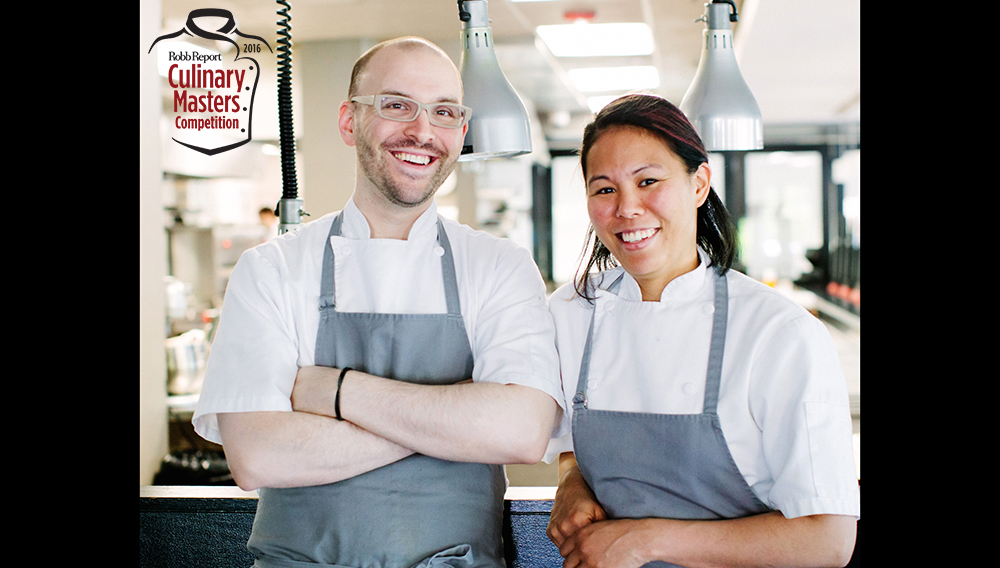 Kim Floresca and Daniel Ryan’s combined 30 years of experience in restaurants reads like a food lover’s fantasy tour. They have held positions at the world’s most celebrated restaurants, among them Per Se in New York City, the French Laundry in Napa Valley, Alinea in Chicago, and El Bulli in Spain. The power couple met on the job in 2002, at the Charles Court restaurant at the Broadmoor hotel in Colorado Springs, and has been inseparable in and out of the kitchen ever since.

Floresca and Ryan both possess extensive knowledge and an experienced palate; by working in tandem, each chef complements the other’s strengths, offering two distinct yet harmonious approaches. “We can accomplish big things or we can divide and conquer,” Ryan says of the benefits of cooking as a twosome. Notably, they served together on the executive management team at the three-Michelin-star Restaurant at Meadowood in St. Helena, Calif., for master chef Christopher Kostow.

In 2013, ready to break out on their own in a new location—they have traveled the world for their careers, and Floresca was raised in a military family—the pair took their kaleidoscopic background to Chapel Hill, N.C., where they have shared executive chef duties at the restaurant One since their arrival. They immediately connected with the southeastern city, which encompasses a small-town culture that has proven to be a fertile setting for the restaurant: there is a robust agricultural community, multiple local farmers’ markets, a wealth of homegrown-food purveyors, and a young audience in the Research Triangle that hungers for upscale fine dining.

Floresca and Ryan caught the public’s attention the instant they took over the reins at One, updating the menu to reflect their inventive, cosmopolitan style in the North Carolina vernacular. Heritage Farms Cheshire pork, for instance, is a product they used to have shipped to Meadowood; the source is now just a little more than half an hour away. They use it in dishes such as pork shoulder with second-season cherries, brassicas, and hazelnuts, as well as black olive–brined pork loin cooked sous vide and served with early rhubarb and salted cucumbers. The menu changes daily according to what is in season, and the expertise of each chef radiates through the fine details. Perhaps the pair’s most distinctive trademark is to deliver savory bites in delectable little packages ordinarily reserved for sweets, such as toast-and-Mornay macarons, salt-and-pepper madeleines, and even a chestnut, chicken liver, and caramelized onion bonbon. Off the dining area at One, a dozen counter seats allow patrons to peer into the kitchen and watch the clever romance that plays out when chefs Floresca and Ryan are at work.

In April the couple was named the People’s Best New Chef: Southeast by Food & Wine magazine.