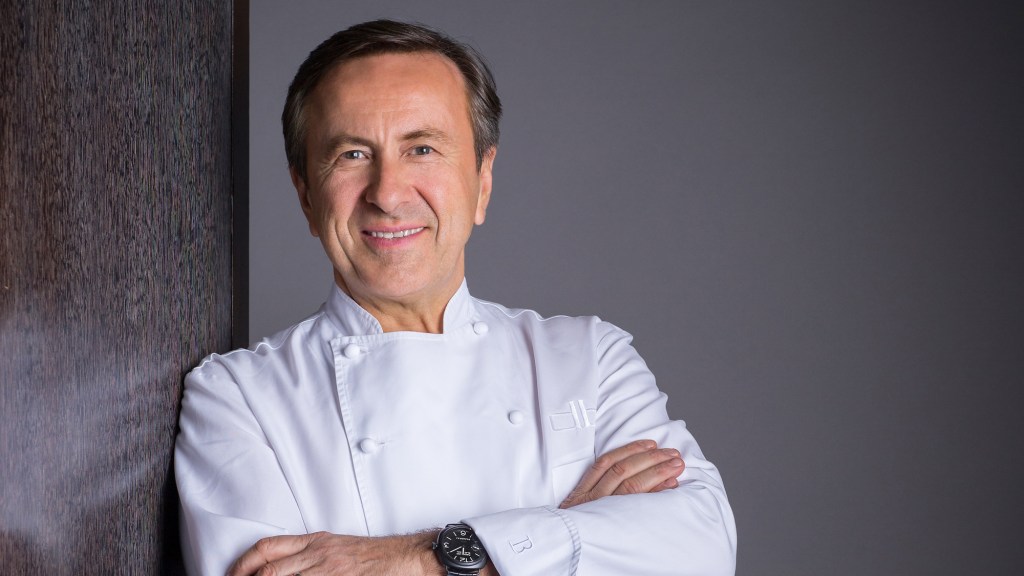 Earlier this year, celebrated chefs Thomas Keller, Daniel Boulud, and Jérôme Bocuse helped lead the U.S. team to its first-ever victory in the prestigious cooking competition Bocuse d’Or. On October 23, they’ll reunite along with rising stars in the culinary world to host 3 days of amazing food and golf at Robb Report’s Culinary Masters at Montage Laguna Beach in Southern California. As the event approaches, we want to introduce you to the chefs who will make this one of the premier dining getaways on the calendar this year. We start with the French chef who became a New York icon: Daniel Boulud.

Born and raised in a small village outside Lyon, France, Boulud trained under some of France’s greats in a city that’s considered the heart of French cuisine. It is in that town that “Chef of the Century” Paul Bocuse and many other famed French chefs built their legends. Boulud first entered the kitchen at only 14 years old, and a year later, he was named a finalist for best culinary apprentice in France. From there he cut his teeth at some of France’s best kitchens, cooking at three different three-Michelin-starred restaurants before taking an appointment that would bring him to the United States.

When Boulud first arrived stateside in 1981, he figured he’d only stick around for a couple of years to finish his stint in Washington D.C. as a private chef for an ambassador. But a year later, he headed up to New York and took a job at the Polo Lounge, working alongside Thomas Keller; the city has remained his home ever since.

His American star turn happened after he took the helm as executive chef at the Upper East Side French restaurant Le Cirque. The place had been a hot spot, but the food had lagged the scene. Boulud changed that, turning it into a restaurant worthy of a four-star review from the New York Times and eventually earning him a James Beard Award for Best Chef in America.

With accolades in his back pocket, he set out on his own, opening his flagship fine-dining restaurant Daniel in 1993. The restaurant won raves for the way in which he elevated the French country cooking he grew up on. From there his empire grew, opening Café Boulud, Bar Boulud, DB Bistro Moderne, Boulud Sud, Epicerie Boulud, and spreading to Boston, London, Miami, Montreal, D.C., Toronto, Palm Beach, and Singapore. At DB Moderne, he practically created the gourmet burger when he mixed sirloin with braised short ribs and then added foie gras and black truffle. It was just another example of him taking humble food and making it luxurious.

Boulud only had one major honor not on his résumé, and that was victory in Bocuse d’Or. With the American team perpetually underperforming at the biennial culinary olympics, Bocuse himself asked Boulud to help train a U.S. team that could win. Along with Keller and Bocuse, Boulud founded Ment’or, an organization dedicated to mentoring young chefs and creating an infrastructure to improve the team’s performance. At the 2015 competition, the U.S. team won silver in its best-ever showing. But in 2017, the team did one better, taking home the United States’ first-ever gold.