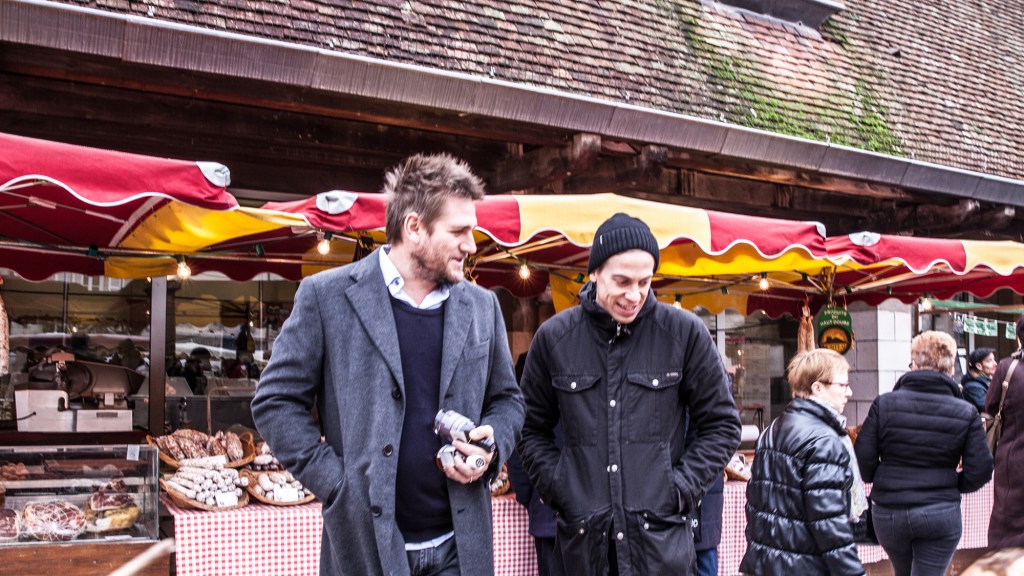 When Curtis Stone and his wife landed in Paris back in January they had no time to waste. They hopped in a car and drove 220 miles south to meet with the top staff from his restaurant Maude. Stone joined them all at a farm, but the grower, Sylvain Peyrot, wasn’t leading a tour of vineyards or pastures. “This guy farms snails for a living—this isn’t a joke, it’s real. Snails!” Stone told Robb Report. “It was really cool to meet someone who is so passionate about his product and took pride in the growth of a variety of snails. And then he served us fabulous snails like six different ways.”

Stone – along with Maude’s executive chef Justin Hilbert and wine director Ben Aviram – had ventured to this remote outpost of Burgundy in search of inspiration. The team is preparing to transform the restaurant yet again, serving a tasting menu of dishes influenced by the products, traditions, and attitudes of the storied wine region.

As Maude went into 2018, Stone and Hilbert set about changing the concept of Maude from focusing on a core ingredient each month. Like Grant Achatz’s Next in Chicago, the restaurant is selecting a new theme each quarter and building a menu around that theme. What will be different than Next is that Maude’s themes will all be focused on a wine region somewhere in the world. The first region they explored was Rioja. On their trip to Spain, they found ingredients like lamb, game, goat, artichokes, mushrooms, red bell peppers, olive oil, and excellent cheeses. They ate tapas and spoke with winemakers to deepen their appreciation of the regions’ customs and flavors.

For a region like Burgundy, with such a rich culinary culture, finding amazing versions of classics was not difficult to do. In Dijon they visited mustard maker Edmond Fallot, offering a rich and varied take on the regional specialty that goes far beyond Grey Poupon. They woke up to croissants and pan au chocolat. And of course, there was seeing the cultivation of escargots by Peyrot. Travelling throughout Burgundy, they tried to not just see ingredients or recipes, they tried to understand the place on a culture level like they did with Rioja.

“In Rioja, it was tradition-meets-forward-thinking,” Stone says. “You’re in one part of town with a place that’s 400 years old, then you’ve got Frank Gehry with an abstract wing on a property.” So when it came to creating a menu around Rioja there were times when they went very traditional, like serving some jamón ibrico. But on other dishes, they created more modernist takes on the traditional pan con tomate.

“What stood out in Burgundy was how specific everything was. You could talk with a winemaker and they could explain how the wine made from grapes grown on the east side of a hill differed from the flavors from the west side of a hill,” Stone says. “Or you go to the market and you see 17 types of chicken available and the little old ladies are all lined up to buy the best one. There’s so much depth and detail.”

Stone, Hilbert, and team are still in menu development for April, but expect some old and new. “There will be times we’ll play it straight,” Stone says. “But we met people in Burgundy wanting to break the old rules, so in other ways we’ll reimagine the concept entirely.” Either way, they want it to be fun and playful and able to convert any escargots skeptics out there. “My wife started out saying, “Don’t you make me eat a snail,” but by the end of the day she’d eaten five or six iterations.”

Reservations will be available on Tock with $125 for the tasting menu. Then if people want to add a wine pairing, they’ll have three options: Village for $125, Premier Cru for $250, and Grand Cru for $500. Of course, Stone is also encouraging people to bring in favorite vintages from their own cellars by not charging a corkage fee.

“You wouldn’t think it, but that’s me being selfish. It’s my sly way of getting a smell of some of these incredible wines, oh, and maybe even a taste,” he says with a laugh. “When we launched the Rioja menu collectors came in with some amazing bottles, opening $40,000 of wine over a few nights. It turned it into a party and a conversation about Rioja not just among themselves, but with the tables around them. I love to be able to bring that kind of experience and give people a chance to travel without leaving town. It was really fun.”