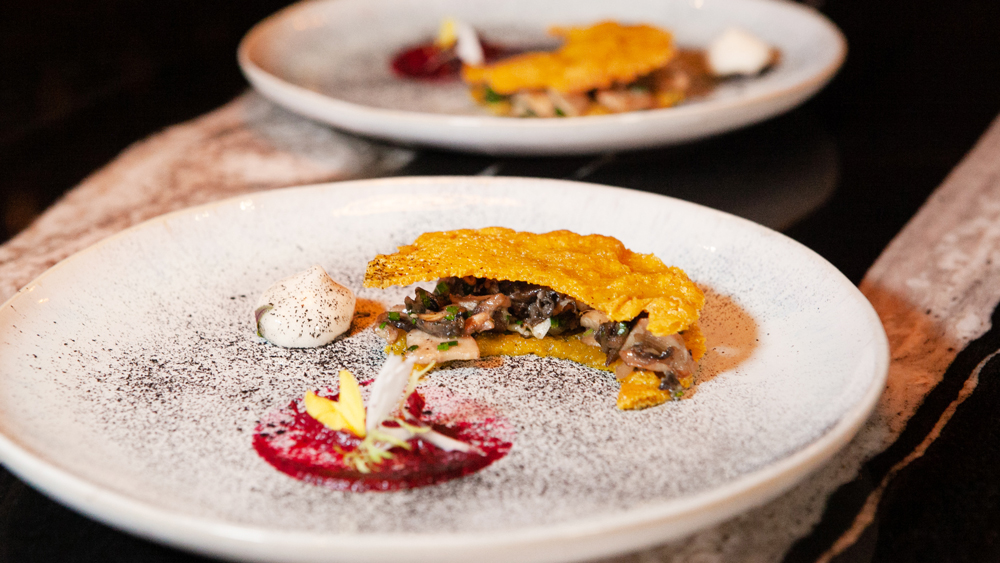 Chef Helene An, who recently was honored with a Pioneer Award in Culinary Arts from the Smithsonian Institute, is often referred to as the “mother of fusion food.” Her family’s San Francisco restaurant Thanh Long has long been credited for introducing Vietnamese flavors to American audiences.

Now An is ready to introduce Americans—introduce the world—to something else: Vietnamese fine dining.

Her new restaurant, Da Lat Rose, will open Oct. 30 above her Beverly Hills restaurant Crustacean. Crustacean executive chef Tony Nguyen encouraged An—who he lovingly refers to as “Mama”—to open the space and collaborated with her on the menu.

“To be honest, there’s not that many great Vietnamese chefs,” said Nguyen, who is of Vietnamese heritage. “We have Mama, she’s a pioneer in the cuisine, and we might have a handful of other chefs who are doing Vietnamese food, but not that many chefs know the cuisine well enough. It’s kind of like we have to write our own language and introduce it to the world. And we’re still in that process.”

At Da Lat Rose they are speaking An’s dialect specifically, telling her rags-to-riches life story through food. They call it a “gastro-biography” of the pioneering chef. The restaurant will serve 12 courses, with each representing a different period of her life. The courses represent how she, and the people of Vietnam and the Vietnamese Diaspora, were affected by World War II, communism and the Vietnam War, and how they struggled and continue to struggle to assimilate as refugees.

“We used her life story as a larger amplifier for what so many Vietnamese Americans went through,” said Bosilika An, An’s granddaughter and director of development and strategic partnerships for her restaurants. “For a lot of the Vietnamese people coming here, it was not something you did by choice. A lot of people came here with a lot of shame or a lot of pain and a lot of hurt. Their big priority was how do we provide for our families and how do we go along to get along. Like, let’s not rock the boat, let’s just keep our heads down, work hard and help our children call this place home.”

Da Lat Rose’s atmospheric setting is as dramatic as the narrative. Diners start their meals with amuse bouche and micro-brews in a replica of a bia hoi, or neighborhood beer hub. For example, one dish is a clam, elegantly grilled and served over white coals with Vietnamese balm, or lemon mint.

Then diners cross an “air bridge” and enter the 40-seat main dining room. Rickshaw-inspired carts are affixed to each table, on which servers prepare, plate and present dishes tableside.

One of these dishes is the banh khot, a turmeric pancake that is topped with king crab, coconut béchamel sauce and Royal Kaluga caviar. It is meant to be a celebratory dish, representing An’s marriage. An and Nguyen collaborated on the thit kho course, which incorporates her old and his new techniques. The pork cheek dish is served with a braised quail egg, Vietnamese caramel and activated-charcoal rice with fermented mustard greens.

“There’s a myriad of different dishes and so much complexity to Vietnamese cuisine and our history and our heritage,” Bosilika said. “But the cuisine hasn’t been allowed to grow up. It has taken a back seat in comparison to other Asian cuisines and hasn’t been given the opportunity to really be appreciated and understood. The food is very simple in how we believe it to be simple; you get it on a street corner or, for me and most people, your grandmother’s house.”

Fresh vegetables and herbs are featured heavily on the menu, as the Vietnamese city the restaurant is named for, Da Lat, has lush farmland and is known as “The City of Eternal Springs.” An incorporates ingredients in the dishes that she likes to work at home, such as banana blossoms, water spinach, white jelly mushrooms and snow fungus. Nguyen says she teaches him something new every day.

“I’m super blessed to be working next to her,” he said. “Our number one goal is just to make sure that whoever’s coming through the doors that they leave happy, and that we continue to inspire each other and the people that we work with. I always felt like it was very admirable that Mama was still in the kitchen. I want guests to hear her story and to have a better understanding of how good the cuisine can be and how elegant it can be. But also to leave knowing how special a person that she is.”

In keeping with Vietnamese oral storytelling traditions, servers narrate An’s life and career as they present the courses:

An spent her youth as a refugee in Vietnam and then married wealthy; her adult home employed French, Vietnamese and Chinese chefs, who introduced her to a variety of cuisines. The family fled Vietnam during the Fall of Saigon in 1975 and relocated to San Francisco, where they lived together in a one-bedroom apartment. The family owned a deli, which later became An’s cult-favorite Thanh Long restaurant.

At Thanh Long, An served dishes such as cha giò (egg rolls), but incorporated French and Chinese flavors because she was concerned Vietnamese alone were too foreign to Americans. She became famous for her roasted crab and garlic noodles. The family opened Crustacean San Francisco in 1991 and Crustacean Beverly Hills in 1997.

“When I came here, I never thought that I did fusion,” An said. “I just made my own cuisine. If I did something pure Vietnamese, they didn’t understand. The palate is different. So I had to dilute it, change it so everybody can eat it, so everybody can understand and they can enjoy it.”

An’s next mission is to start a fund for emerging Asian chefs, to mentor them and further Vietnamese traditions and heritage in the U.S. and support the Asian Diaspora as a whole.

“This should be a place where not just Vietnamese Americans, but everyone in America, can come and learn a little bit more about our culture and also celebrate everyone else’s and their own,” Bosilika said. “Hopefully [we can] inspire other ethnic chefs to continue sharing their stories and their heritage with everyone in this country, and also for other Vietnamese chefs to be proud of the humble home food that we eat.

“At a time when rhetoric on immigration is the way it is, my grandmother’s story is really an embodiment of what the positives of that can be. It’s a beautiful reminder that everyone has something to give.”

Da Lat Rose will offer one seating on Wednesdays and Thursdays, at 7 p.m., and two seatings on Fridays and Saturdays, at 6 p.m. and 9 p.m. The tasting menu is a set $225. Reservations are available via Tock.