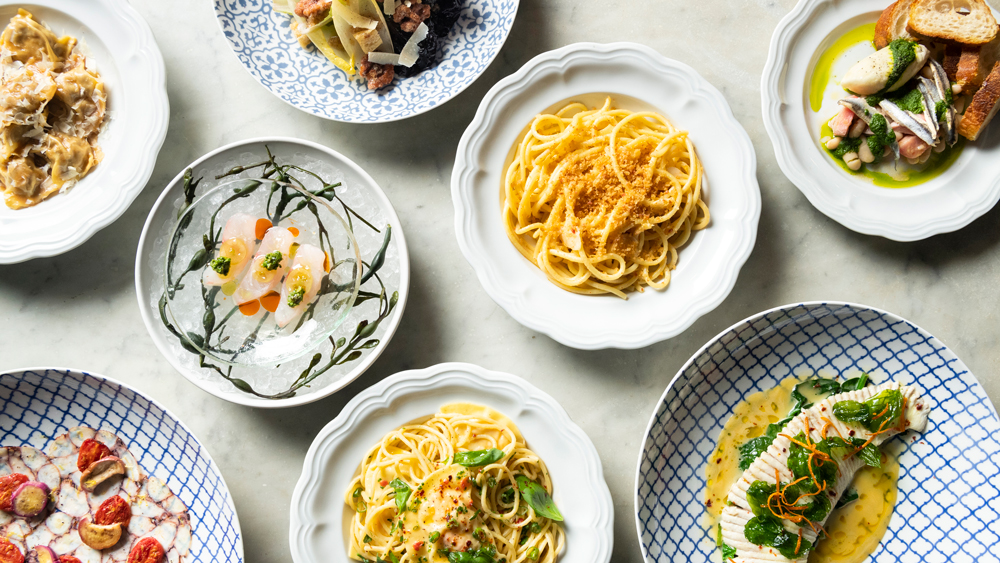 For his last service at Perla, chef Michael Toscano served giant pans of “Big Night”-inspired timpano. East Coast rap pumped through the dining room and amaro flowed freely to buoy diners’ spirits—and they needed the boost. The beloved chef was on his way out of town, leaving New York to open Le Farfalle in Charleston, South Carolina.

Perla was the first restaurant where I felt like a regular. My husband and I would sit at the bar and order two pastas with too many glasses of wine. Or we would crowd into a booth with friends and feast on a whole veal head, presented tableside and then served as a platter of cheeks, tongue, nasty bits and whipped brains.

In the five years since, New Yorkers have been spoiled with exceptional Italian restaurants—Lilia, Misi, Don Angie, Vic’s and Rezdôra, to name a few. Still, every time I walked past the shuttered Perla space, I felt a pang of longing for garganelli and tripe ragu.

Thankfully, Toscano is back. Last week, at the same 24 Minetta Lane address as Perla, he opened the 62-seat Da Toscano. His Le Farfalle is still thriving down South, but Toscano and his wife and business partner Caitlin got an offer from their former landlord that they couldn’t refuse—one that included the opportunity to open a restaurant reflective of their culinary history, service philosophy and heritage.

“Da Toscano is the culmination of everything we’ve been working toward, a place to showcase who Caitlin and I have become and all the lessons we’ve learned. It’s all in this restaurant,” says Toscano. “We’re really going for it.”

Before running his own restaurants, Toscano learned the intricacies of Italian cuisine at Babbo and then as executive chef of Eataly’s flagship Manzo, where restaurateur Gabriel Stulman found and poached him for Perla. Caitlin worked front of house at Per Se, Del Posto and Craft.

Toscano’s menu at Perla celebrated bombastic offal dishes and large format meats. There’s a wink to that cooking at Da Toscano. It’s just a bit more restrained. For his veal head parmigiana, Toscano dispenses with the standard pounded cutlet in favor of head meat that’s been braised, picked, pressed into a disk, breaded and fried. Topped with the usual suspects—tomato sauce, mozzarella and basil—it’s red sauce nostalgia with a subversive animal funk.

The Quinto Quarto section of the menu features three more offal dishes, among which is a humble, garnish-free bowl of minestra maritata. Toscano builds the soup’s broth with pig’s head and bones and parmesan rinds. There’s ground tripe and greens and Anson mills hominy bobbing in the broth. Somewhere at the intersection of Italian wedding soup, menudo and pozole, it tastes like something you might ladle from a pot on grandma’s stove or from the back of a locally famous bodega. It’s Toscano’s cooking at its most personal.

Toscano’s mother’s family originally hailed from Guadalajara, and his father comes from an Italian family that immigrated first to Mexico in the early 19th century and then to Texas. During his childhood in San Antonio, he grew up on simple, fresh Tex-Mex cuisine. His mom stuffed tamales and griddled fresh flour tortillas. He would drive with his dad to pick up barbacoa made from a whole cow’s head, and they would smoke and grill meats in the backyard.

Da Toscano’s menu is accented with Mexican-American influence. Among his ten pasta selections, there’s bucatini with garlic, dried shrimp and potent chile de árbol. A bowl of fideo, redolent of brown butter, blends Italian and Mexican technique. On a trip to Italy, the Urbani truffle matriarch Olga Urbani taught Toscano to make fideo by toasting the noodles and then cooking them like risotto, adding liquid gradually and stirring until tender and creamy. His own mother toasted fideo and served the pasta with a bright, spicy tomato sauce. At Da Toscano, the visions blur with a tangle of amber colored noodles, skate, pickled habaneros, preserved lemon and earthy porcinis.

As he adjusts back to New York, it helps that Toscano knows the space well, as his kitchen design and equipment from Perla are intact. A number of his former cooks have returned to his leadership, and Perla’s original pasta maker, Josephina Campos, has resumed command of handmade gnudi, agnolotti and orecchiette. William Tuggle, his chef de cuisine, has worked at Daniel, Narcissa, Dovetail and Montmartre. Once they hit a groove on dinner, they’ll add lunch service five days a week.

After dinner on Da Toscano’s opening night, I sipped on said amari and my spirits were buoyed. Michael Toscano is back in New York, and his cooking is more personal and exciting than ever.

Toscano takes over the same space he had five years ago.  Photo: courtesy Evan Sung