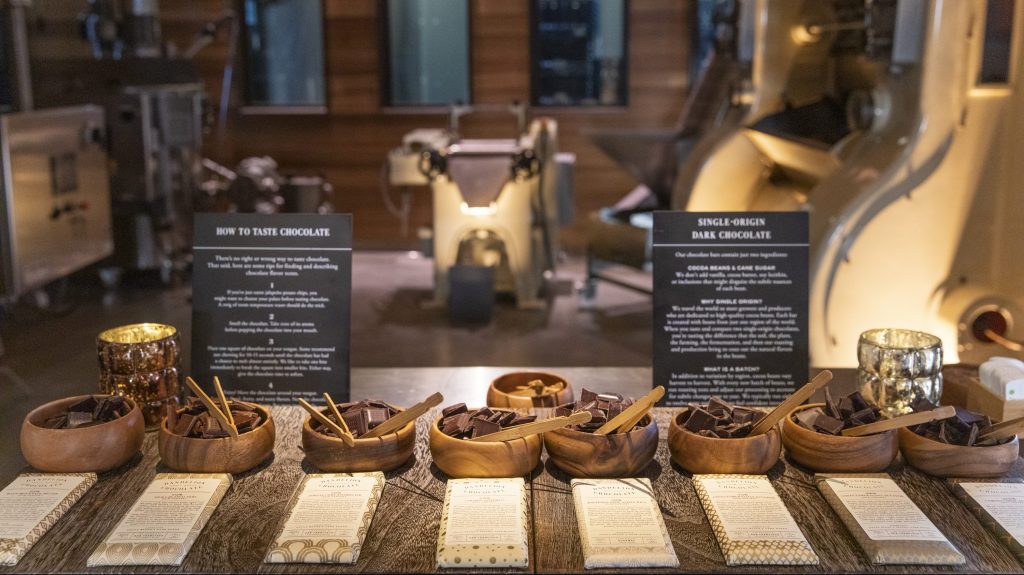 “Nobody goes there anymore, it’s too crowded.”

These days, Yogi Berra’s famous quote could be about Austin’s Franklin Barbecue, Portland’s Salt and Straw ice cream, or San Francisco’s Tartine Bakery. And also about Tartine’s around-the-corner neighbor Dandelion Chocolate, which has packed cacao-lovers and weekend tourists shoulder-to-shoulder in its Mission District storefront since 2013.

Now, just as Tartine expanded with its Manufactory (which is also now at San Francisco International Airport and in Los Angeles), Dandelion is moving on up to a massive 28,100 square-foot store, cafe, “chocolate salon” and literal chocolate factory. A bean-to-bar Hersheypark, if you will, except there’s actual chocolate-making (and no rollercoasters).

Dandelion began as a home hobby for former tech entrepreneurs Todd Masonis and Cameron Ring in 2010, before opening in the Mission three years later. While everybody loves a truffle or a bon-bon, Dandelion is defined by its commitment to single-origin simplicity. Their chocolate, most of which is 70% or higher, includes only cacao and sugar, with no stabilizers or additives (not even vanilla). It’s sourced from 30 different countries, including Costa Rica, Ecuador, Sierra Leone and India.

But Dandelion still offers confections and drinking chocolate too. If its treats and fun you’re after, the new space will deliver more of that. The cafe, led by former Bouchon pastry chef Lisa Vega, will have breakfast service, while the “salon” component is  all about afternoon chocolate and ice cream tastings, including baked goods, hot chocolate, and an eight-course “Tree to Bar” cacao experience. The cafe and salon is called Bloom, named for what happens when your chocolate loses its temper (“a surprisingly beautiful part of the chocolate-making process,” Masonis told Hoodline).

Dandelion 2.0 is on 16th Street between Harrison and Alabama, in the same eastern, semi-industrial part of the Mission (a.k.a. Mission Creek) as Tartine Manufactory. The space may be a literal factory, but it’s also plenty luxe: it was designed by Chris Harrelson of the architecture firm Gensler, which was also responsible for Facebook Headquarters, and the Conde Nast offices at One World Trade Center.