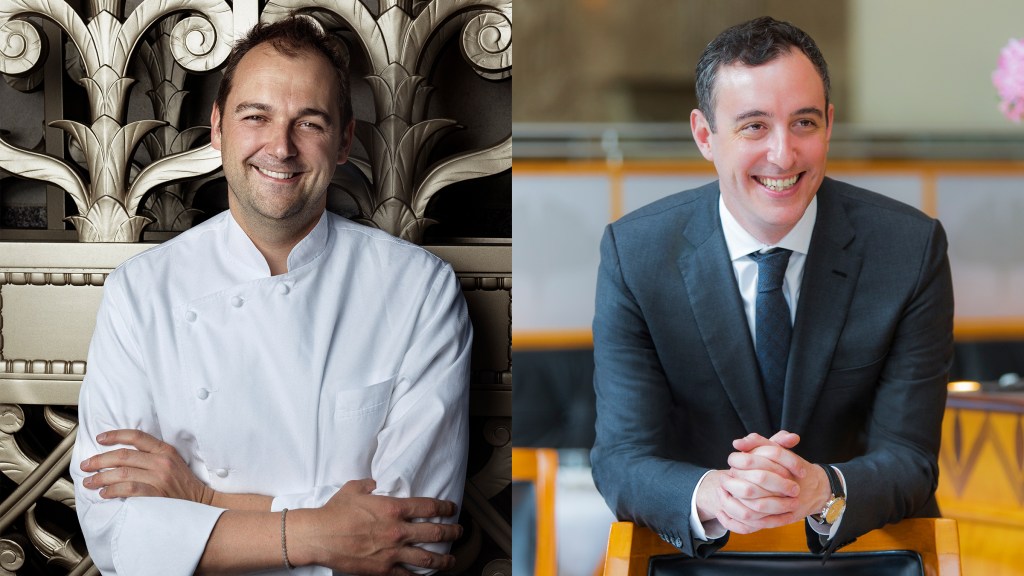 Topping the World’s 50 Best Restaurants list should be a financial boon for the winner. That is, unless the owners close the restaurant right after their victory. The duo behind Eleven Madison Park—chef Daniel Humm and restaurateur Will Guidara—did just that this spring, shutting down to remake their New York institution.

Now that they’ve reopened this past weekend, Guidara and Humm can’t help but laugh their awkward timing, but also reflect on why closing was so necessary in the first place.

The two bought the restaurant in 2011 from Danny Meyer, who first opened it in 1998. Ever since, Humm and Guidara have been slowly evolving the restaurant from a French-American brasserie serving 400 people a night to a restaurant in more rarefied air; one that’s a fine dining stalwart seating only 80 during a service and featuring food worthy of three Michelin stars and title of World’s Best.

While they’ve been able to change the food, the space remained similar to its 1998 iteration. So in mid-2016, as they prepared to sign a new 20-year lease, Guidara and Humm decided this was the perfect time to shut down and remodel. They wanted to bring the entirety of their vision for Eleven Madison Park from food, to architecture, to place settings all into harmony, and feel like it’s a space suited just to them. “Ideally, the room is going to feel very familiar but also very different. We’re really proud because, well, we hope people like it because now it’s ours,” Guidara says.

As they prepared to reopen Eleven Madison Park and publish their new book, we caught up with Guidara and Humm to discuss what guided them through their reinvention, the philosophy behind Eleven Madison Park, why a picture of Miles Davis hangs in the restaurant, and what Picasso’s drawing of a bull has to do with food.

Did you have any pangs of regret when you won world’s best restaurant knowing you were about to close and all that potential business lost?
WG: I loved it because we achieved this milestone and then three weeks later, before we closed, we did the retrospective menu. To get that award, come back, honor the road that got us there in the first place and then say, okay, now it’s time to reboot and forge a path forward. There was poetry to it.

DH: It was crazy when we became number one and there were no more reservations to be had.

WG: I’ll tell you one thing, we talk about having our core values where even as we evolve, we need to stay the same. One thing that we’ve always been really good at is making decisions that were not financially good.

DH: We’re consistent at that.

On top of Eleven Madison Park you also have NoMad, how do you try to differentiate yourself when approaching these restaurants?
DH: I think also we have a musical inspiration in all of our restaurants. It started with Miles Davis at Eleven Madison and it’s the Rolling Stones at the NoMad. The Rolling Stones come across like loud and loose and rock and roll but they’re extremely studied and everything they do is very intentional and I think that’s what the NoMad is for us as well. We want it to feel more casual but not because we care less, it’s because that we decided that we’re going to serve this cappuccino or whatever to you in a much simpler way, not because we don’t have enough staff.

WG: We put a picture of Miles Davis on the wall of our restaurant in 2006 or ’07. We came up with a list of eleven words most commonly used to describe him including endless reinvention, forward moving, collaborative, fresh, vibrant. That stayed there ever since. As we evolve constantly, we try to make sure we’re staying true to that because the beautiful balance is something can evolve without forsaking what it is. It’s the same with NoMad. When I eat his food at Eleven Madison Park, NoMad, or Made Nice, it’s very different at each place, but I know I’m eating his food.

What are the building blocks of your food that creates a common thread through your different restaurants?
DH: First, it tastes good. It sounds funny but everything we do is to make it taste better, I hope. That’s what the thought process is, that’s where cooking is magic too. To make things taste better, to elevate flavors. My creations are not to figure out five flavors together that are the best flavors together ever. If it’s a dish that’s about tomato, I want to do everything that I can to make that tomato taste as good as it can. It sounds pretty simple but…

WG: I want to say something about that. You go to some restaurants and it’s like, we just want to serve you weird stuff or something. That’s why I love having him as my friend, partner, chef is that I’ve learned a lot about food from him and through his food but doing something unique or interesting or telling a story, it’s never come at the expense of just making a really tasty dish. I feel like some people think that’s obvious, but as the cooking world gets crazier and crazier, it’s not actually that obvious. Do you know what I mean?

Are you saying that there are chefs just burying food under too many layers of technique?
WG: No, it’s like some people are like, “Isn’t it cool we’re doing this and this and this?” It is cool. I have a lot of respect for that. I just like the fact that the number one priority is always that it’s just delicious.

I’ve heard a chef say, “I don’t know if this tastes good, but it’s interesting.”
WG: There’s a place for that.

WG: Some art you appreciate, but you don’t want to hang it on your wall.

What are the other building blocks of your food?
DH: We have four fundamentals, which every dish needs to have. One is delicious, the other one is the aesthetic. We’re looking for a minimal aesthetic, an organic aesthetic, something that feels effortless and that wasn’t always the case. Ten years ago, I was proud that we had 15 or 20 chefs in the kitchen and we wanted the guests to see that and so we cut everything into perfect cube and put everything with the tweezer on the plate and it looked like you didn’t want to touch it and the people were impressed by the effort.

WG: Now there’s like 30 chefs in the kitchen and people are less impressed.

DH: Ideally, it looks like it has fallen on the plate but it’s actually the most difficult to do that consistently. It’s much easier to say a centimeter cube, everything is measured. It’s actually easier to control. Number three is it has to be creative. It has to have an element of surprise or a combination that’s unfamiliar or a technique that’s different. Then the last one, it needs to make sense. The intention of the dish could be a historic reference or a classic dish reference or it could be inspired by an artist’s work or it could be a childhood memory, but it needs to make sense. These are our guiding principles. They work against each other because creativity and taste, delicious and creativity especially, they don’t go hand-in-hand. They are all equally important.

And how do all those pieces fit together to create your tasting menu
DH: As far as constructing the meal, every meal should have its moments. There are moments when you bring the food in the middle of the table then everyone is coming together. There’s moments where the plates are individual. There are courses that might take 25 minutes from being served to being eaten and then there are other ones that maybe takes three minutes. It’s maybe just one bite. I think it’s how a musician thought of maybe composing an album, back when people still listened to whole albums.

You mentioned that you used to want guests to see all the work you’d done on the plate, what changed for you?
DH: Only two years ago I created a dish–and I’ve been cooking for 25 years–that for the first time I felt like this is how I wanted to cook my whole life and for the first time I achieved it. It’s a dish of two ingredients, celery root and black truffles. When that happened, on one side I was very happy because I had been searching for this. My dad is an architect. I’ve been inspired by art all my life. I like minimalism. I try always to cook like that, but I couldn’t do it early on because I felt, it needs another sauce, it needs another puree, another crispy element, another garnish or whatever. The hardest way to cook is with only two ingredients. Then, when it happened, on one side happy on the other side I’m like, oh shit, now all my food from before seems so out of place. I knew we’d have to dig deep.

How did you do that?
DH: We came up with the four fundamentals. Since then, we created about 130 dishes with that spirit and it has pushed our food forward like in a huge way. It was always inside of me that I wanted to take things away but taking things away is so much harder than adding things. Adding is very easy but taking away is the hardest.

WG: It’s like that quote, “Sorry I wrote you such a long letter, I didn’t have time to write a short one.”

DH: There’s this amazing piece, it’s a study on subtraction by Picasso. It’s 11 drawings of a bull. He wanted to draw the bull to figure out what are the most powerful lines in that bull. The first one is a full-on drawing of the bull and then the next one is leaving off a little bit, leaving off a little bit, leaving off, and then the last one is like three lines. That’s been really inspiring to me because that’s very hard to do. It’s easier draw the bull in its full form, than to draw it in three lines.