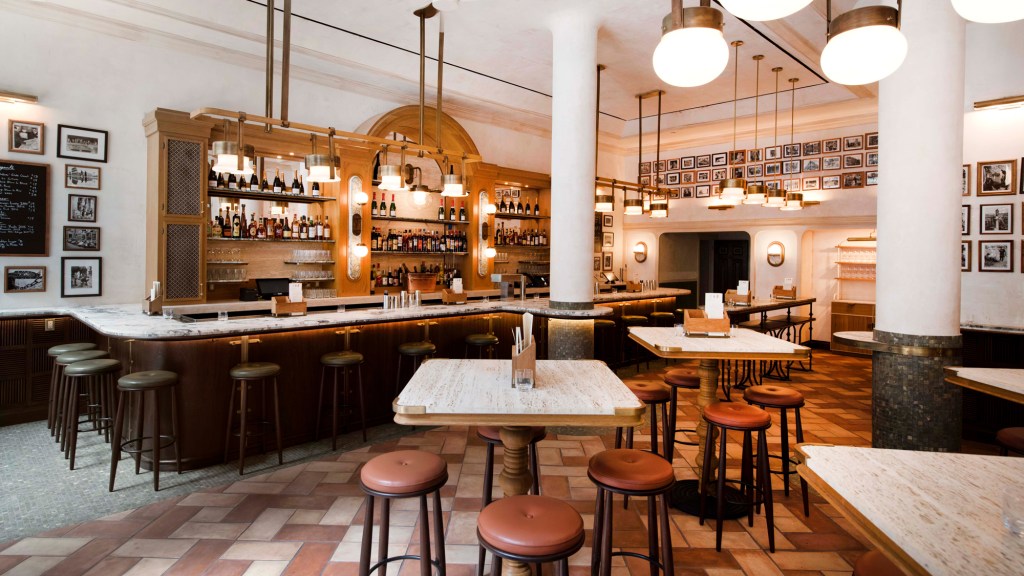 Wandering the streets of Rome, moving in and out of cafés and restaurants, chef Joe Tarasco allows himself to be swept up in the Eternal City’s rhythm of life and the food that accompanies it. “Rome is unique and beautiful in the sense that it’s modern and ancient at the same time,” he says.

Romans don’t just grab their coffee to go in the morning; they lean up against the bar to enjoy their shot of espresso. Food stalls in the Testaccio neighborhood serve less glamorous cuts of meat braised for hours to make delicious sandwiches—just like they did back when all the butchers in the neighborhood had to send all their best meats to the nobility. And before dinner, people usually enjoy aperitivo with snacks among friends. Tarasco couldn’t get enough.

“Rome has something delicious, interesting, and craveable that you want to eat for every point throughout your day,” he says. “The food is so simple yet dynamic and powerful and flavorful.” At a time when chefs around the country are exploring the food of Sicily, Emilia Romagna, and Naples, Tarasco and restaurateur Danny Meyer want to bring that Roman food culture to New York City.

It’s one thing to go there, learn some dishes, and bring them back to serve in America. But in the chef’s latest project with restaurateur Meyer, the two also want to evoke that Roman rhythm Tarasco enjoyed by serving food that’s attuned to each time of day, akin to the tempo in Rome. Now they just need to convince New Yorkers to slow down for a minute and appreciate it.

Today, Tarasco and Meyer open Vini e Fritti, their third restaurant in the Redbury Hotel following Marta in 2014 and Caffe Marchio, which opened in September. The duo sees these three restaurants as part of one larger project that helps New Yorkers have the ideal food at the right time of day, just as if they were in Italy.

“We thought this is a great opportunity to take the idea of a piazza and implant it here inside the Redbury Hotel,” Tarasco says. “We want to introduce something back to New York that they haven’t seen. With Marta it was thin, crackly, crusted pizza and a little more formal dining experience. Caffe Marchio is a stand-up Roman-style coffee bar in the morning. And for lunch, Old-World-style dishes like pollo alla cacciatore in ciabatta. These are the kinds of things most New Yorkers are not eating for lunch or a pit-stop bite. And with Vini e Fritti, we’re trying to introduce Roman snack culture, specifically through fried snacks.”

Vini e Fritti won’t be the place to get a big meal. “It’s a celebration of aperitivo culture,” Tarasco says. That tradition is a little different from American happy hour, where coworkers gather at a midtown bar to get half-soused on dollar-off beer. It’s a combination of light drinks and snacks to unwind from the day with friends, but it doesn’t fill you up too much.

“It’s a pit stop before dinner with small dishes that pack a punch inspired by Roman street food,” Tarasco says. “We’ll serve dishes like zucchini blossoms stuffed with mozzarella and anchovy, a cone of mixed fried seafood, and fried baby artichokes.” There will also be non-fried snacks like marinated vegetables and stracciatella with preserved tomatoes.

Of course, it wouldn’t be aperitivo without the drinks. “There’s the traditional cocktails like the Negroni and spritzes,” Tarasco says. “We wanted a little mix of highbrow and lowbrow, so we have a selection of nearly 40 Champagnes. Bubbles and fried snacks are a great combination.”

Tarasco realizes his love of Roman culture won’t necessarily translate right away when imported to the States, but he remains optimistic.

“Not everybody in New York wants to lean up against the counter with an espresso and eat their cornetto and take their shot and then move on,” Tarasco says. “Hopefully, we can start to coax people out of maybe their normal daily rhythm and try to introduce them to a different way to experience things.”