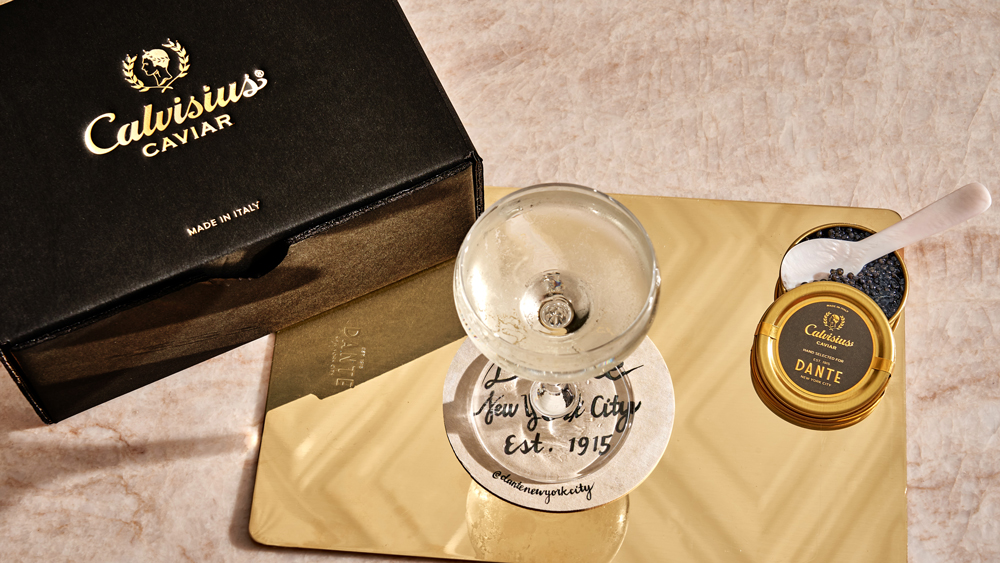 New York’s Dante may be known around the globe for its beverage program—in 2019 it was number one on the World’s 50 Best Bars list—but owners Linden Pride and Nathalie Hudson are ready for it to be recognized for its culinary chops as well.

“We are a restaurant with a great bar program,” Pride said.

The Dante team is looking to spread that message beyond New York City by making a temporary home at Chefs Club at the St. Regis Aspen, the resort’s residency-format restaurant venue that has hosted the likes of Eleven Madison Park’s Daniel Humm in the past.

During Dante Aspen’s yearlong stint, the team will serve fresh, coastal Italian fare for brunch, lunch, and dinner, inside and outside. They will also offer all-day variations on the negroni, spritz, and martini, and open the venue to live acoustic music and wellness programming like yoga classes.

The Aspen location will be quite a transformation from the original Dante, which first opened in Greenwich Village in 1915. Its modern iteration came to life in 2015, serving Mediterranean-inspired dishes and variations on the negroni. By 2019, it had topped the World’s 50 Best Bars list. Last summer, Dante opened a second location in New York, in the West Village, which has a wood-fired grill and a focus on spritzes and martinis.

Dante did a trial run in Aspen this past winter, serving bottled cocktails and après ski take-out meals at The Snow Lodge. Another restaurant was initially set to open in the space at the base of Aspen Mountain for the season, but backed out due to concerns about pandemic dining restrictions. The Dante team stepped in for a last-minute collaboration, offering outdoor drinking and dining options beginning in December.

“In January, all indoor dining was closed [around Aspen], but there were still people here who wanted to get out of their houses and be a part of something,” Pride said. “We were one of the few places open and we did simple, great food and drinks and hospitality. It resonated. I’d see the same people every day, five days a week.

Dante made quite an impression.

As the season wrapped up, they were approached by the St. Regis and asked if they wanted to extend their stay and move operations to the Chefs Club Aspen.

Pride jumped at the opportunity to extend their stay in Colorado. He also felt the residency format would be a good break for his team.

“We opened a new restaurant in Manhattan last year, but that took us two years to build,” he said. “We were also overseeing the general contractor and the design process, and that’s fun and great, but it took two years away from doing what we do really well, which is running great restaurants.

“Coming out of COVID, we’re also licking our wounds, trying to make up for a year of going backwards. When [the St. Regis] approached us, they had this fully built-out wonderful space and it just made sense. This seemed like a really nice way to do something new without having to get a space, demolish it, rebuild it …”

The drinks list is also a “best of,” showcasing the most popular negronis, spritzes and martinis in New York over the past six years. Those include the Aperol spritz, negroni on tap and their signature Garibaldi (Campari and “fluffy” orange juice).

The crowd he served this past winter already knew the options well.

“We saw a huge amount of Dante regulars, funnily enough,” he said. “A lot of people were from the city, who know us, combined with people coming from Texas. So, it was a bit of a different crowd than what we are used to seeing on the East Coast.”

People were ordering lighter drinks than he was accustomed to making, and lots more tequila. Dante Aspen began slinging ranch water, a tequila-Topo Chico highball, that they’ll continue to offer—in a glass lined with black lava salt—through the summer.

“We’re always influenced by the local community,” he said. “A few years ago, we did a pop-up in Madrid and were so gung-ho about our negronis, but people kept coming to the bar and asking for gin and tonics. So, we gave them what they wanted. We developed our Mediterranean gin and tonic with Manzanilla sherry, elderflower tonic, bitters, and olives.”

Food-wise, winter diners were looking for large cuts of meat, dishes that warm you up. He thinks their summertime clientele, the hikers and mountain bikers, however, will want lighter cuisine. It’s harder to get to Aspen from the East Coast during the summer (direct flights are discontinued after ski season), so West Coasters, Los Angelenos, will be his target audience.

He wants to create a community space for them, one that fits into their daily lives and “transcends the traditional restaurant environment.” As he does that, he and his family will split their time between Colorado and New York, while his culinary director and director of restaurants will remain in Aspen until the fall.

“It’s a serious Dante restaurant, so we need to be here as much as we can to make sure we get it right,” he said.

When the residency is over next summer, Pride wants to find a way to stick around, by either extending the residency or finding a new location for Dante Aspen.

“We have a long-term view to stay here and have Dante to continue to be a part of this community that invested in us,” he said. “And I can’t tell you how good it is in the mountains with my little girls running around. It’s like heaven.”