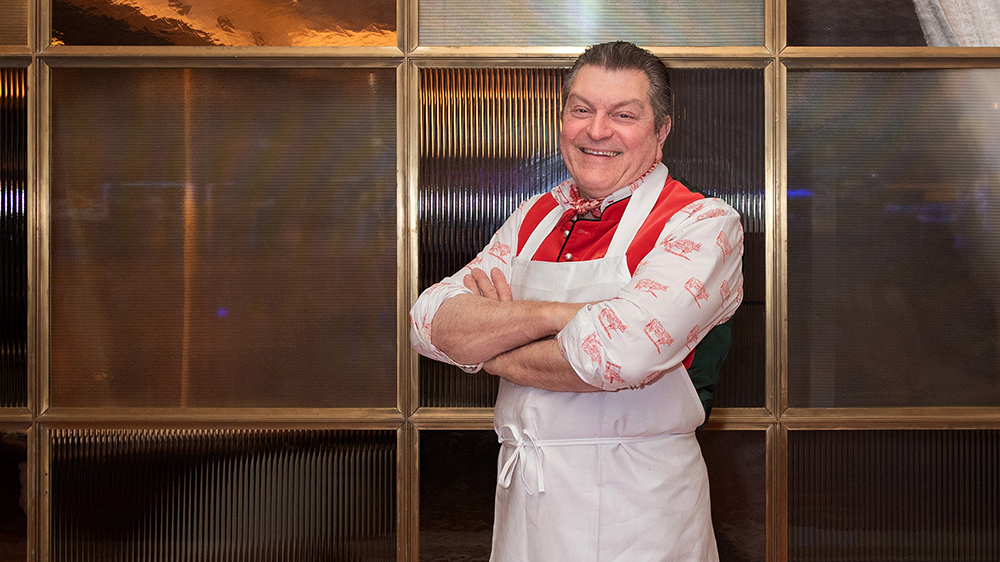 The latest season of Netflix’s Chef’s Table features Dario Cecchini, a master butcher from Panzano, Italy, a humble hilltop village (population: 1,100) in Chianti, Tuscany. On the date of the premiere, one would expect Cecchini to be gathered among friends and family in his shop, Antica Macelleria Cecchini, lifting a glass of vin santo in a toast, then parading through the cobblestone streets in celebration.

But, no. He is in The Bahamas. There, in a luxury hotel in Nassau, he presides over a trolley loaded with meat, gleefully carving a heaping hunk of Tuscan porterhouse, singing Italian folk songs. After carving, he lifts up the hulking T-bone toward the heavens, regarding it as if it were the holy grail. “Carne!” he growls. Then he ravenously, joyously, bites into it. A captivated Jane Krakowski, sitting at a dining table in front of him, applauds wildly.

This surreal scene occurred during the recent grand opening of Carna, Cecchini’s new steakhouse within the Baha Mar restaurant collection. It is not only his first restaurant outside of Italy; it is the first outside of his three in Panzano. Known as the “world’s most famous butcher,” Cecchini is probably the world’s only famous butcher. He is certainly one of the world’s few eighth-generation macellaios.

How does a butcher become famous? During the mad cow crisis in 2001, he held a mock funeral for a bistecca Fiorentina, attracting attention from CNN. He starred in Bill Buford’s book Heat as the Dante-spouting master of ceremony, magnetically holding court at the shop where he’d teach the New Yorker writer how to be a butcher. An appearance on Anthony Bourdain’s No Reservations followed. He cultivated a client list that includes Prince Charles and Sting. Most recently, he disemboweled a cow as a guest on Top Chef Kentucky.

The Chef’s Table profile of Cecchini chronicles his journey into butchery, a reluctant one despite his ancestors. He felt such compassion for animals that instead of following the family path, he enrolled in veterinary school in Pisa. His studies were short-lived, however. When he received a call that his father was terminally ill, Dario left school and returned home to look after his sister and grandmother (his mother had passed away when he was 11). He had no other choice but to take over the butcher shop. Dario suffered in his new profession at first, struggling with how his livelihood seemed so at odds with life as a veterinarian. He eventually learned: “A butcher has a path of life not detached from animals but beside them.”

Sitting in the private dining room of Carna, Cecchini is dressed in the colors of the Italian flag: his white butcher’s apron tied over a red-and-green vest, covering a white dress-shirt adorned with red cows. He also wears his heart on his sleeve; his eyes well up with tears when I ask what he thought of the Chef’s Table episode. “The creating of that episode was all-consuming,” he says, reaching for a handkerchief. “To get to your sixties and find yourself to have your story told….” His voice trails off. He takes a moment before finishing the thought. “I didn’t want to watch it because I thought it is not looking forward, it is looking back at something. Been there, done that. But my wife wanted to watch it so I watched it. I cried the whole time. But now I’ve seen it. Now it’s done.”

Cecchini’s story is far from finished, and he is taking advantage of the escalation in exposure to spread his mission of humane treatment of animals, in life and in death, cultivating what he fears may be a dying art. “It’s important that we teach that one must have respect for the animal, because the sacrifice, the death of the animal, is what nourishes our lives. And that’s what makes it very important that every part of the animal is used and used well.”

That mission, and the regard for tradition, permeates his restaurants in Panzano. There, guests arrive through narrow cobblestoned streets. They dine within centuries-old buildings flanking the butcher shop, which dates to the 18th century. Diners sit around a long communal table, feasting on not only the prime parts of meat, but the whole carcass. Every part of the cow is used in dishes such as “chianti butter” (lard) and boiled beef knees.

In the Bahamas, guests arrive via the casino floor in the recently opened resort. Upon entry, they pass through a sleek recreation of a meat market and wine room, illuminated with the pin lighting one might find in a jewelry shop, rather than butcher shop. The menu at Carna focusses on “hero-cuts”—Tuscan porterhouse, Australian Wagyu tenderloin, Kobe New York strip, among others. Touches of Panzano appear. There’s a profumo del chianti, a salt and herb blend that seasons each steak; a “bone marrow crumble;” and a sugo di carne comprised of mixed ground cuts. Yet, no boiled beef knees.

The stark differences raise the question: Surely the most famous butcher in the world has had other offers, closer to home, in more culinarily celebrated locales? Why The Bahamas? “I have had a number of offers, that is true,” he answers. “But I’ve always taken the advice that the fox gave to the Little Prince: ‘one sees well only with the heart.’ So with this offer I felt for the first time in my life that before a business deal there was an offer that was filled with inspiration.”

With the inspiration comes challenge—does he really expect vacationers at a Bahamas resort to “get” his nose-to-tail ethos? “I see this as starting on a path together. I will have to do a lot of explaining and teaching,” he says. “Thomas [Griese, the executive chef on property] and I set down a sugo di carne yesterday that was exactly as though it had been created in my own kitchen in Panzano. A month ago that dish wasn’t on the menu. And now it is. And surely the boiled beef knees are going to arrive next. There is a beautiful base here and the rest is coming.”

“The rest,” includes Cecchini’s ultimate dream: to mentor local ranchers and butchers. “I want to support young butchers here in the Bahamas,” he says. “I want them to come to Panzano and learn and then come back and continue explaining my ideas.” SBE Hospitality, which operates Carna at Baha Mar, aims to take that message globally, with several more Carna locations planned worldwide. And to further introduce Cecchini to the world, SBE’s Umami Burger outlets just released a Dario Cecchini “Butcher’s Burger” featuring wagyu beef, seasoned with profumo del chianti and Cecchini’s own pepper jelly mostarda.