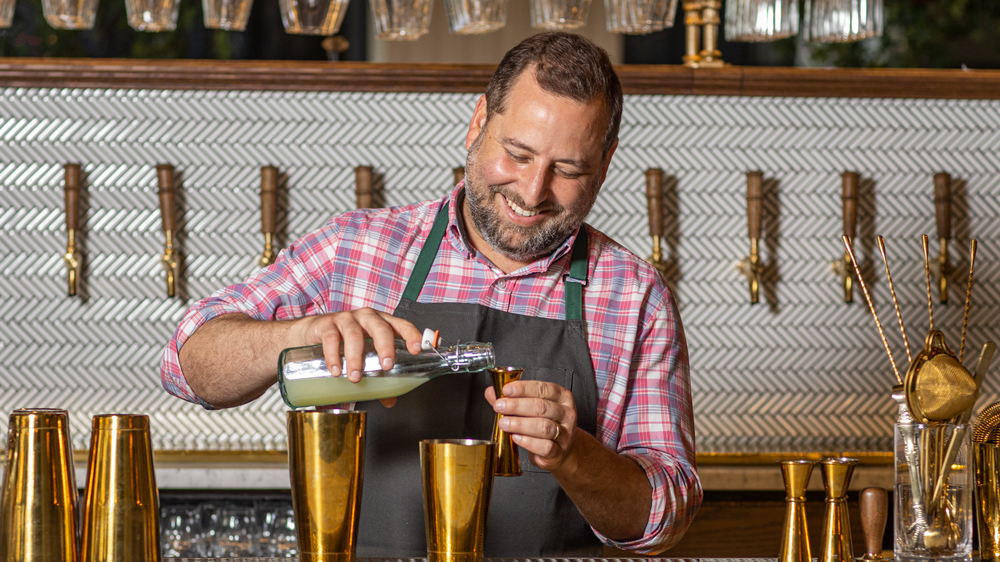 You should probably avoid most “New Orleans-inspired” restaurants outside of the Big Easy. They tend to take their culinary inspiration from modern-day Bourbon Street—fried shrimp platters and neon-hued Hand Grenades—instead of the sophisticated, sacred dishes and cocktails that really flavor the city’s centuries of history.

But Dauphine’s, a new restaurant from some big-named New Orleans ex-pats in Washington, D.C., is about to change all that.

The eatery opened in D.C.’s Midtown Center earlier this week. A project of Long Shot Hospitality, the team behind D.C.’s The Salt Line, Dauphine’s brought Kristin Essig (Coquette, Emeril’s, Peristyle) to town to serve as executive chef and signed Neal Bodenheimer (Cure, Cane & Table) on as a partner and to lead the beverage program.

“A lot of people have a preconceived notion that New Orleans food is only fried or only super spicy and only super rich, and really there’s a lot more nuance to that needs to be shown and represented,” Essig said. “The dining scene in New Orleans is not stagnant. There are a lot of grande dame restaurants that have been around over a hundred years and that’s because they continue to inspire and recreate their own things.”

Essig, who cooked in New Orleans for more than two decades, is joined in the kitchen by The Salt Line’s Kyle Bailey. There, they are taking diverse and storied Louisiana dishes like seafood gumbo and transforming them with seasonal, Mid-Atlantic ingredients. Essig hasn’t worked with a number of products on the menu—like fresh dairy and cold-water fish, scallops and lobsters—in 20 years because they were not accessible locally in humid Louisiana.

And instead of reinterpreting dishes, they are playing with groups of flavors. For example, the smoked swordfish crudo starts as a swordfish loin cured in sugar, salt and green onion ashes, then cold-smoked over hickory. They pair that with cold-pressed celery juice, red bell peppers and garlic—a play on the culinary “trinity,” which is the base for nearly every classic New Orleans dish.

The raw bar offers this dish alongside blue crab fingers and smoked catfish dip, as well as Muffaletta-inspired charcuterie like spicy coppa, Sazerac bresaola and hog’s head cheese, all of which Bailey makes in house.

“We’re trying to pay respects to all the parts of New Orleans that make it a culinary destination and just such an amazing place in general,” Essig said. “We are really trying to do our best to honor the people we are inspired from. Not only in the food, but in the décor and the hospitality.”

On the restaurant’s website, there is a “references” tab, which details many of the landmarks, professionals, ingredients and purveyors that inspired the team. That list includes Chef Paul Prudhomme, whose recipe for red remoulade is used at Dauphine’s, and filé powder, the ubiquitous gumbo thickener made from sassafras leaves that was originally used by the Choctaw Indians.

Bodenheimer, a longtime friend of Essig who convinced her to make the move to the capital, is leading the beverage program, melding classic New Orleans recipes and famous Mid-Atlantic sips with his own blend of Caribbean rums and tropical syrups. For example, his Absinthe Rickey is a hallucinogenic riff on D.C.’s Gin Rickey. There are also frozen drinks, wine, local beer and straight New Orleans classics like Hurricanes, Sazeracs, Planter’s Punch, a large-format French 75 that’s presented tableside for two and a Ramos Gin Fizz made with farm-fresh sweet cream and eggs.

The space pays homage to the Big Easy as well. The 145-seat restaurant, designed by Grizform Design Architects, incorporates New Orleans-ish details such as oak parquet flooring, walnut millwork, mosaics, marble and hand-cast wrought iron that’s adorned with greenery. The dining room is sunken down, covered by a pergola, and features a raw bar and charcuterie case; a mezzanine above hosts private dining. Outside, the restaurant has 4,000 square feet of dining space, including a 30-seat bar and tiled fountain, plus a covered patio with seating for 80.

“There are so many tasteful touches from the velvet on the chairs to the faux leather wallpaper upstairs that looks like alligator skin,” Essig said. “It’s gorgeous. I used to live in the French Quarter and one of my favorite things about living there was you could walk to work the same way every single day and still notice something that you’ve never noticed before. And this restaurant is like that. I guarantee you will find something new every single time you dine here.”

The project was heavily delayed due to Covid, but Essig said that has allowed them to get all the pieces in order.

It’s like you’re at Cafe Du Monde, but off the Potomac instead of the Mississippi.  Photo: courtesy Jen Chase

“We’re pacing ourselves out and really allowing the process to ramp up gradually,” she said. “Quite honestly, one of the main reasons I took the position was because I knew we would not be opening at 100 percent capacity. It’s a massive restaurant, the largest restaurant that I’ve ever been a part of. And my expectations were very realistic as far as I’m not ready to open a restaurant that’s serving 400 to 600 people a night.”

Located a few blocks from the White House, where The Washington Post building used to be, Dauphine’s will expand into happy hour, lunch and Sunday brunch service later this summer to showcase other types of dishes like bananas foster (a Brennan’s staple).

Essig said she misses New Orleans “terribly” and hopes to make it back in October for Jazz Fest. And she hopes diners at Dauphine’s will follow her lead.

“My goal as the chef of the restaurant is that I want people to experience something on a level that gives them a taste of it,” she said. “But I want them to buy a plane ticket and to go to New Orleans and be able to visit all these people [who inspired us] and see it for themselves.”