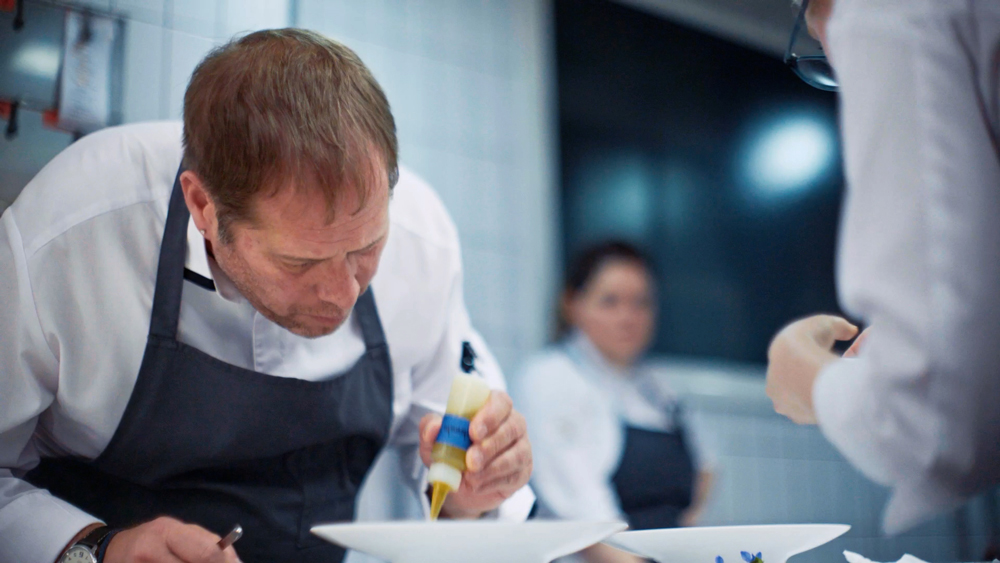 For the fifth time, chef David Kinch found himself a finalist for one of his industry’s honors: Outstanding Chef at the James Beard Awards. Because this year’s ceremony is taking place virtually, the Beard Foundation asked him and the other nominees to pre-record an acceptance speech in case they won. It didn’t sit right with him.

“I’ve been thinking about what I wanted to say, and I realized I had nothing to say at all,” Kinch tells Robb Report. “The awards are about celebrating—they’re a feel-good thing. For me, it just didn’t feel like there’s anything worth celebrating. That’s when I thought, why are we even participating this year?”

So over the weekend, Kinch took to Instagram to declare he was withdrawing from the Beard Awards. And in the process, he called out the ills of the industry that existed before Covid-19 hit and have only been exacerbated by the pandemic. “THIS IS OUR RESET BUTTON,” he wrote. “The hospitality industry is rife with rampant gender and racial inequality and numerous obstacles impede restaurateurs’ ability to pay living wages to teams, focus on sustainability and foster positive work environments.”

This came from a chef not prone to social media proclamations and his peers applauded his gesture. But we wanted to dig a little deeper into the statement, so Kinch—the chef-owner of Michelin three-star Manresa as well as the more casual Mentone and The Bywater—sat down with us to discuss his post, tipping and a way forward for the industry.

Why did you choose to speak out in this way?
I thought that everybody making a video was going to probably address Covid and all the issues that are in the forefront of our industry. I thought any message I might want to say would get lost in everybody else trying to make the same message. Maybe I could be more impactful if I respectfully decline participating in the ceremony this year and I’d have a chance to make my message through that. I think I did.

When you decided to sit down and write this, what was the first point you wanted to convey?
I wanted to let people know that the decision was made solely upon not really feeling anything to celebrate. I didn’t want people to feel that perhaps there was anything nefarious as to why I was doing it or that I was covering myself. I also wanted the Beard Foundation to know. I let them know in advance I was going to do it, in fact, I ran the statement by them. It wasn’t about them.

So those are really the first things that I was concerned about when people understood why I was doing it and I was trying to do it in a respectful manner.

Why did you call the “Golden Age” of restaurants a “Gilded Age”?
Look at the economy. In a normal economy, you have 8, 10, 12 years of growth and then you have a year to two-year correction—a 5 to 10 percent correction. I think of 2000 and 2008 when we got really hammered and restaurants go out of business. There’s like this giant flushing. I hate to say this, but the weak and infirm—the businesses that are struggling—when the money dries up and people don’t go out, places go out of business. In the last several years, what people call the golden age has become a bit bloated. You had lots of fancy restaurants and lots of concepts and a lot of people involved who are probably new to the industry and there’s a shakeout. Every 8, 10 or 12 years there’s a shakeout. It’s normal, just like any other business.

What’s different now?
The shakeout that’s happening now—the economy coupled with Covid—is unprecedented. That’s why I refer to it as a reset. It’s an enormous opportunity to create the industry we want that actually works for us; that works for everyone involved. That may be a pipe dream.

But getting back to gilded, I just thought that there was a lot of—for lack of a better word—baroqueness in the restaurant scene. And every once in awhile, there’s a big flushing and everything is made lean again. That’s happening now.

In your statement, the most prescriptive action you detailed was eliminating tipping—why target that?
There is a huge imbalance between the front of the house and the back of the house. I find the single biggest obstacle is state and federal laws that say gratuities and tips can only be for people who touch the guest. Touching the guest meaning people who come face to face and speak with the customers—servers.

What’s the knock-on effect of that?
It widens the wage discrepancy between front of house and back of the house; the cooks, the chefs. They work very hard to create an experience. If you pay them equal to what servers can make with tips, then you have to charge for it. And if you charge for it are people going to come?

People seem resistant to getting rid of tipping though.
The most high-profile example would be Danny Meyer and all his restaurants. He switched to no tipping and he has changed back. The public will travel outside the United States and will be perfectly fine with no tipping, but when they come back here they’re not.

It is nice when I travel abroad and I get a bill and that’s it. It’s not like a phone bill with added fees.
People who complain about taking tips away, they’ll gladly go vacation in Europe or Asia. There have been no-tipping policies in place there for a long time. They’ll go to France, Italy and Spain to go eat in a restaurant and you don’t have to tip.

Why do Americans cling to this system?
It’s ingrained in the dining public. What are tips? Tips are a 19th and 20th-century system. It’s a passive-aggressive, thinly veiled threat saying, “If you don’t do a good job and you don’t take care of me, I’m controlling how much I’m paying you.”

So what would you change?
You expect no tipping at your restaurant. You’d write “no further tipping is expected.” Make it very clear that if someone wants to tip because someone did an exemplary job, then by all means. But you’re not expected to tip. And how do I do this? I build it into my prices. That’s what they do everywhere else. This is not a radical or revolutionary idea, it’s what everyone does except in the United States. So I build a 15 to 20 percent price increase into the menu. People then freak out and say your restaurant is too expensive. Yeah, but you’re not tipping. What do I do with that money? If the government allows me, I take that extra 20 percent and I put it in my pocket. I’m the owner of the restaurant.

So you’d pocket it?
No, that wouldn’t happen. There are market forces. We live in a country where unfettered capitalism rules and people are going to go where they are challenged and compensated appropriately. I will be forced to compensate people appropriately. I will pay my servers and I pay my back of the house equitable wages that are honorable and afford them a living. It allows them to be a professional and take pride in what they do. It allows me to offer health benefits. I can do anything I want with that money, and what I would do with that money is create a more equitable atmosphere at my restaurant in how I pay people.

Why not eliminate tipping now yourself?
There are obstacles in place for business owners and chefs to do it. There’s the tip credit, which is where if an employer knows someone’s tips exceed the minimum wage, then they don’t have to be paid the minimum wage. That’s not in California, we pay minimum wage and tips on top of that.

We need to get rid of the tip credit and the perception needs to change that when you go to a restaurant, you pay the prices for the meal and everything and you turn around and leave. No more passive-aggressive, thinly veiled threats. I’m not saying people think like that, but they feel obligated to tip and when they do, do they think about how they can control the situation?

In your statement, you also mentioned gender and racial inequity in the industry. In the last couple of months, there have been Instagram accounts started where people have shared incidents of racial or gender bias and abuse in restaurants. Have you read any of those accounts?
No, I don’t read any of that stuff. It would make my brain explode. But it is an issue in our industry. I don’t necessarily want to say things are getting better, but the environment I came up in was very rough and very different than now, but it still an issue. I am in no position to preach or tell anyone how to run their business. All I can do is be concerned about my establishments and do the best we can and try to lead by example. I don’t want to trumpet. And people might accuse me of things, but I invite them to come and see how hard my team and I work to foster a positive work environment where they get to share in the goals and visions of the restaurant. I don’t want to pretend to have the answers for anyone else. For racial and gender issues and harassment and toxic work environment, the key is to educate oneself and to become more aware of how important those issues are and let that guide you.

But one of the wisest decisions I ever made when we went from one restaurant to two was to create a full-time HR department to deal with these issues and do staff training and staff awareness. That’s the best advice I can give. It’s astonishing to me when I go to restaurants and find out they don’t have HR departments. You can even hire someone part-time to come in and deal with these issues. To not even do that is so reckless nowadays.

When we spoke a few months ago, you said the hardest part was yet to come for the crisis. Has anything changed about your outlook for the industry since then?
No. I’ll say this though, and just speaking for myself, there’s a crisis, right, and I can deal with a crisis. But it’s really difficult to deal with a crisis where we have no finish line. There is no end in sight. If you could say “I need you to do this until the end of the year,” then I can do it. But the fact that it’s ongoing and there doesn’t seem to be any sort of unified front to get this whole thing to end, that’s what I find very discouraging. My post was slightly out of character for me, but these are unprecedented times. I usually don’t have a bullhorn, but things are wack right now.