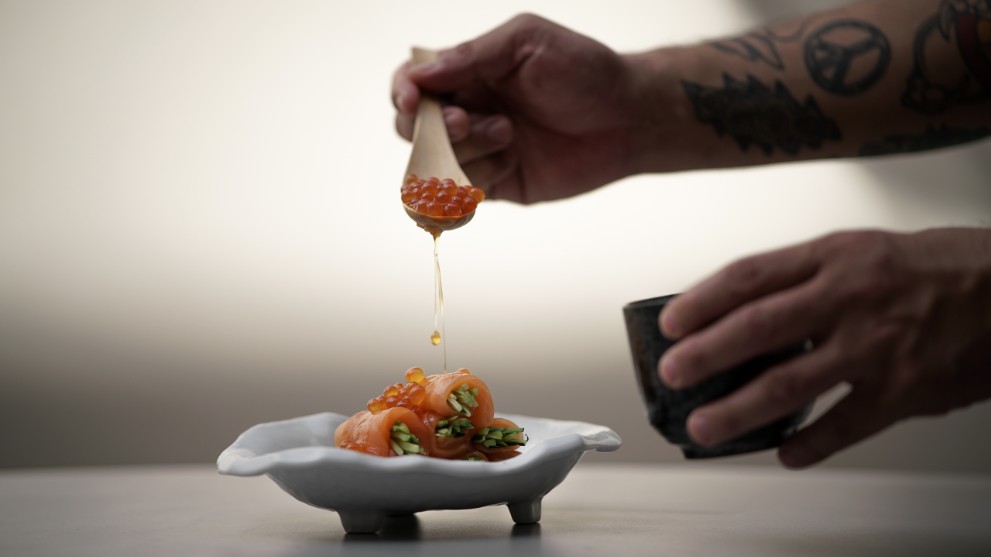 Kensho Group founder/owner David Wynn often skateboards around Los Angeles thinking about his to-do list. There are the hotel rooms he has to open and the spaces around the city he plans to turn into restaurants, bars or event hubs. There are the seemingly endless number of tasks involving design, food and beverage, amenities and operations. But skateboarding keeps him calm and focused as he makes his way from point A to point B.

Wynn is creating an Asian-American hospitality empire, and he’s doing it with a clear purpose. Wynn, who is half-Korean and was born in Los Angeles but spent about a decade of his childhood in Seoul, is here to show you that multiple things can be true at the same time. You can be Asian and American. You can be refined and raucous. You can put together sleek, moody environments that make people want to eat, drink and celebrate together. You can make things for yourself that also turn out nicely for lots of other people.

After creating the eclectic Kensho restaurant/wine-and-sake bar, hidden in the Hollywood Hills, Wynn and Kensho Group are working on projects in the Arts District and West Hollywood. Wynn also has spaces in Venice and Chinatown that he plans to transform in the future.

Some of the signature dishes at Kodo  Gry Space

“It started in Hollywood, but we are now building (the brand) into something that can grow and scale in a way where all of our friends who are beverage professionals or chefs or design team can work together to build concepts ranging from small to big and anything in between,” he says.

In April, Wynn and Kyoto-born executive chef Yoya Takahashi (who previously ran the kitchen at Michael Ovitz’s Hamasaku restaurant) opened Kodō, an Arts District izakaya. Takahashi, a jovial, music-loving, bearded chef who’s known for his unabashed dancing at Grateful Dead concerts, likes to color outside the lines. He’s noticed a trend of smaller Japanese restaurants, so he’s glad to have a new-wave izakaya with a sprawling patio that feels big and boisterous. At Kodō, which seats about 80 people (not counting a fire pit in the back where guests can gather for drinks), Takahashi is offering omakase sushi but also cooking deeply funky eel-liver skewers and whole scallops with their liver and roe.

“I want to make my own style of restaurant,” Takahashi says. “I want to present every part of the scallop that has flavor. I just believe in myself. If I like it, it goes on the menu.”

Kodō is part of Rykn, a boutique ryokan-style hotel with nine rooms that Wynn plans to open this summer. Guests will be able to enjoy in-room dining (including Takahashi’s version of a kaiseki dinner and Japanese breakfast) and spa/sauna time in a Japanese-style bath facility, all part of a luxurious package that might range from $1,000 to $2,000 for two people. And Rykn has already opened its all-day cafe for coffee, sake, wine and casual meals with egg sandos and noodle bowls. The location, right next to Yangban Society and around the corner from Bestia and Damian, is also ideal for food crawls, and Wynn plans to curate guides to the Arts District for his hotel guests.

After getting Rykn’s rooms open, Wynn and Takahashi will turn their attention to Sunset Boulevard in West Hollywood, where there is a two-story space they plan to unveil this fall. There will be an izakaya/bar with a kitchen setup and robata grill that’s similar to what Takahashi is using at Kodō.

“That’s going to be downstairs, but we do have a second floor,” Wynn says.

“It’s going to be a secret, don’t say anything,” Takahashi interjects and laughs.

“Upstairs is kind of like a TBD secret experience that we’re workshopping,” Wynn says, also laughing.

Kensho Group also has a Venice location (which Wynn says is “a garage of our architects’”) that’s been converted into a similarly secretive retail shop/tea house/pop-up space that might eventually turn into something else. The hospitality company is also thinking about what to do with a gigantic Chinatown space that could be home to a market, food hall or collective of chefs and collaborators.

Wynn, who’s worked as a creative director in video production, is using Kensho Group to connect the dots between the things that inspire him in Los Angeles. He started skateboarding as a teenager because it was a way for him to assimilate into American culture. He thought about turning pro but now realizes that his skateboarding adventures were leading him toward a different path.

“It’s a fun way of learning the city and learning the people,” Wynn says. “It kind of shaped my perspective of everything from filmmaking, art, storytelling, design, clothing, fashion, food—everything. Also, you’re beat up a lot and it’s a rough street thing. My formative years were all skateboarding. I like to carry that kind of fun skateboarder punk mentality into the restaurants that I open. Yoya is like that too. He’s not like a super traditional rigid gentleman. He’s so fun. He’s like a skateboarder in my head.”

As free-spirited as Kensho Group is, Wynn and Takahashi understand that it’s a privilege to create Asian-American experiences on their own terms. There was a time, not long ago, when this didn’t seem possible.

“I mean, I’m a half-breed kid,” Wynn says. “So living in Asia and living in the United States, I was always pretty conflicted about whether I needed to put on an American face or an Asian face, or what to hide and what to show. It’s been a challenge, just like as a person, to have an identity crisis all the time. But this restaurant we just opened, and all the people that are involved and the community that’s building around it and the Asian-American culinary culture, has really allowed myself and our brand to embrace who we are. I think being Asian-American is an LA identity and an LA experience at this point. So I’m really grateful and proud that we’re in a city and doing a culinary group that really embodies it. It can become a platform for other people to look at and be like, ‘That’s big. And that’s what they do.’ It’s kind of aligned everything for me.”

When you build your own path, the whole point is creating something new and different.

“Food is changing,” Takahashi says. “Every restaurant used to be the same. But now many restaurants have something unique. I think the younger generation enjoys this. That’s Los Angeles. It’s a beautiful thing.”