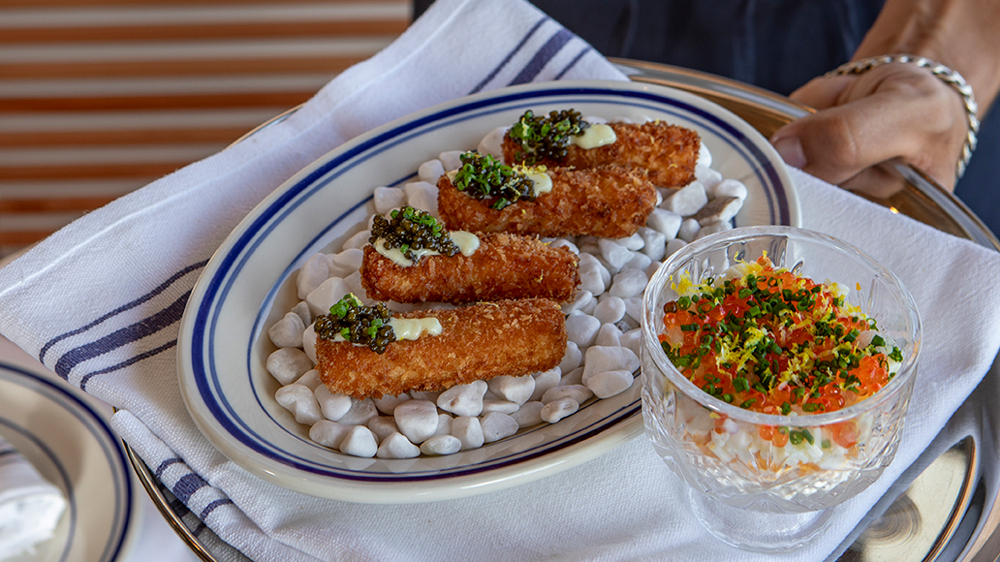 Yet, all this Dear Jane’s glitz comes after an arduous grind.

“We started this project during the pandemic, at kind of the heart of the pandemic, and a big part of it was a belief in independent restaurants,” Patti says of pursuing a prime property where a high-end seafood chain used to reside. “We knew that a space like this would not come up for people like us in any other situation, because it probably would have been swooped up by a big corporate restaurant group. Independent operators get the least expensive piece of property on a questionable part of a street in a part of a neighborhood that hasn’t really come up, and we build our way into making a community.”

But this time around, the Röckenwagners and Citrin get to usher in a new era for a sprawling and storied waterfront location.

“Landing a space like this felt too good to pass up,” Patti says. “We’ve been working on it during a hard time for restaurants specifically, but also for everyone, for families, for businesses. Seeing this restaurant come to life feels to us like possibly the markings of the next phase.”

The nostalgia-evoking food at Dear Jane’s has been calibrated to seem familiar, unintimidating and even simple in a way. But Citrin, whose Melisse remains in the highest tier of fine dining in Los Angeles, is a chef who prides himself on technical precision. So Dear Jane’s—where the team includes Citrin’s longtime right-hand man, Ken Takayama—has engineered dishes like a Littleneck clams casino that’s ready to be popped into the oven for five minutes whenever an order comes up.

“We’re taking all these traditional dishes and trying to make them compatible to this day and age of taste, lightness, flavor profiles,” Citrin says. “So it takes technique.”

When they were R&Ding their caviar-topped fish sticks, Citrin and Takayama hit the freezer aisle to remind themselves of what they wanted to reimagine. Then they created their own version with a fish mousse as the base. The Dear Jane’s sticks are served with horseradish aioli and a dip featuring typical caviar accompaniments like egg whites and yolks, chives, onions and crème fraîche alongside smoked trout roe. This dish is a nod to the caviar-topped “bougie tots” at sibling restaurant Dear John’s, a temporary spot that was originally supposed to close in April 2021 but then extended its lease twice and is now in Culver City through at least April 2023.

Like at Dear John’s, the food at Dear Jane’s is celebratory. (“The tableside shrimp Louie is like the Caesar from Dear John’s,” Citrin says. “It’s about creating the kind of joy we’ve seen there.”) The Dear Jane’s menu has a caviar section known as the “bougie corner.” The restaurant will prepare whole lobsters with orange sauce. Citrin is excited about serving “charcuterie of the sea”: premium tinned fish on a tray that Hans (who wrote the Dear Jane’s menu with Citrin) designed and built to look like the deck of a nautical vessel. And there are plans for different renditions of whole fish, which might include Dover sole and turbot.

“We’re just finding things from the ’60s and ’70s and reinventing them in a way,” Citrin says. “Continental cuisine is what we’re looking at. But at the end of the day, it really has to seem authentic.”

This is true of the space itself, too. With its wood flooring, cozy booths, tiered dining room and water views, Dear Jane’s resembles dining on a yacht.

“There’s something familiar about it, even though it’s been updated,” Patti says. “I think what people will like about it is that it’s familiar and nostalgic without being campy or dated.”

Everything from the retractable doors built by Hans (a self-taught carpenter along with being a chef, baker and restaurateur) to the artwork Patti selected from the collection of local gallerist Robert Berman was carefully considered. Walk into the restaurant’s reception area and you’ll see paintings that depict a diverse group of women who represent all the Janes of the world—a fitting introduction to a restaurant opened by Patti, a proudly Korean-American woman.

And for those calling in to Dear Jane’s, they’ll be greeted by a familiar voice. Jamie Lee Curtis, a close friend of the Röckenwagners, recorded the voicemail message for the restaurant. She had previously done the same thing for Dear John’s, but the seafood-focused Dear Jane’s has a customized message that will make fans of A Fish Called Wanda swoon.

“It was really her idea,” Patti says.

The origin story dates back years ago, when the perpetually punctual Curtis showed up early for a dinner with the Röckenwagners at a restaurant they used to have in Santa Monica.

“I think Hans was in the kitchen and I wasn’t there yet,” Patti says. “The next thing you know, I walk in and she’s literally answering the phones at the front desk.”

Curtis, of course, has already indulged in Dear Jane’s herself at a preview event in August. The True Lies star and her Hollywood multihyphenate husband, Christopher Guest, were joined by guests done up in ’70s-themed attire including Jodie Foster and Sharon Stone along with younger stars like Top Gun: Maverick’s Greg Tarzan Davis. The gathering showed off the restaurant’s blockbuster potential, but to the Röckenwagners and Citrin Dear Jane’s opening—and all the attendant glamour—has bigger significance.

“Hopefully, it can ring in what we’ve all been waiting for, which is the Roaring ’20s,” Patti says. “We hope we can at least be part of setting the tone for that.”