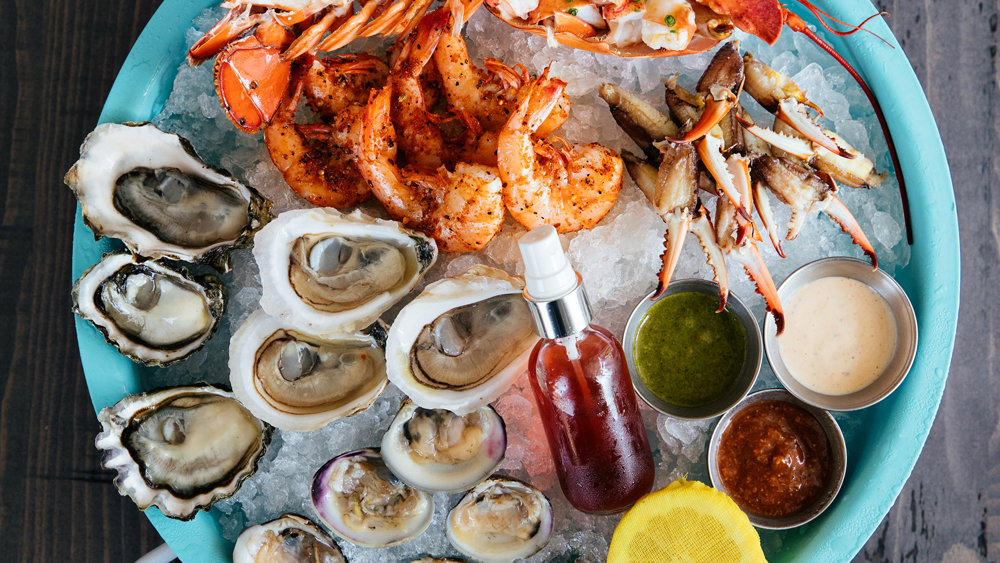 When the weather begins to change, there’s nothing quite like sitting outside at dusk with a glass of white and a platter of oysters on the half shell. It’s the simplicity of it all that makes it pleasurable: the plump, salty bivalves, the crisp wine, the slight breeze.

“Everything’s so bright and light,” Velazquez said. “A lot of restaurants have a little darkness to them, which makes them cozy. But this location is very alive.”

Delaney is the first concept from Neighborhood Dining Group (Minero, Husk, McCrady’s) since acclaimed chef Sean Brock departed the company. Velazquez was most recently a sous chef at Husk in Greenville, S.C., and his menu matches Delaney’s ambiance: light and bright, with most dishes being served raw or composed of fewer than four ingredients.

“Seafood is one of those things that I’ve always said doesn’t need anything; it’s pretty perfect as-is already,” Velazquez said. “You don’t really want to mask the flavor.”

Oysters and littleneck clams—organized on the menu by location, salinity level and size—are served on the half shell, on ice, simply with cocktail sauce, shallot sauce and lemon. Traditional caviar service comes with cornmeal blinis, chives and house-made cultured cream. For fun, you can pair that with “mini” bottle service: a 50-mL carafe of vodka that’s chilled to zero degrees.

The restaurant sources much of its seafood from nearby farmers to guarantee quality and a personal touch.

“It almost feels like a family. We follow [the farmers] on their journeys and then all of a sudden we see [their product] in our hands and we’re able to give their stories with our story,” he said.

The Lowcountry’s seasonal produce is showcased, as well, in plates like scallops, which are served with butterbeans, preserved lemon and country ham; salted fish beignets, which feature hot sorghum and bonito flakes; and peel-and-eat shrimp, which come with Southern-style white barbecue sauce.

Velazquez, who grew up in Puerto Rico, also infuses his culinary heritage into dishes.

“Obviously it’s not a full Puerto Rican restaurant, but it’s something I can’t hide,” he said. “It’s something I have in me and it definitely comes out to play. It’s been amazing to see how receptive the people have been in this town for it.”

For example, he uses red snapper—a popular fish in Puerto Rico—to make ceviche, dousing it in a citrusy leche de tigre marinade and cilantro. The spicy white shrimp ajillo comes bathed in garlic oil infused with kelp and chiles. The shrimp are hit with sherry, white wine and a squeeze of lemon at the end of cooking and are served with a rustic hunk of torn bread to sop everything up.

He also throws Puerto Rican flavors into sauces like the smoked dulse (a red seaweed) chimichurri that comes with the daily oyster selection; mojo sauce that accompanies the blue crab claws; and the squid ink chicharron that come sprinkled on the octopus escabeche. But Velazquez’s favorite dish on the menu, the one he says is the most flavor-packed and special to him, is the blue crab rice with crab roe bottarga.

“In Puerto Rico we make a lot of crab rice, and then I come to Charleston and people rave about crab rice as well,” he said. “And I’m like, oh man, it’s happening. We’re definitely going to try to marry both cultures together.”

In Charleston, crab rice is made with the holy trinity: onions, bell peppers and celery. In Puerto Rico, they make it with sofrito, which is commonly made up of peppers, onions, garlic, tomatoes and cilantro. Velazquez mixed them together and threw in some Lowcountry pork. Then he let the rice get stuck to the bottom of the pan and scraped it back, incorporating the scorched rice, or traditional pegao, into the finished product.

“It’s one of those dishes that you just want to sit in front of the TV with a big ol’ spoon and go to town on it,” he said.

Velazquez describes his food differently than others.

“One thing that affects our food is the positivity that we strive for every day in our kitchen,” he said. “I’ve worked at enough places where there’s a lot of negativity and bad vibes and you could really tell that in the food. But when you have a happy cook, happy food comes out.”