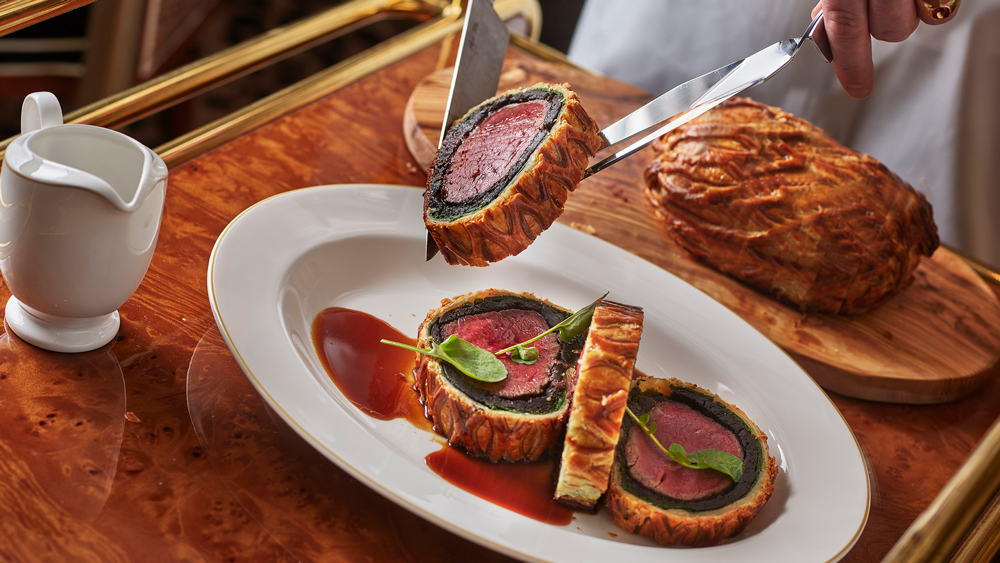 When the Delilah supper club opens at Wynn Las Vegas in July, you can expect champagne-fueled nights, live entertainment and celebrities galore. This won’t be surprising because the original Delilah in West Hollywood was created by The H.wood Group, the hospitality scene-makers whose regular clientele has included Drake, Kendall Jenner and Justin Bieber.

What might be surprising is the food at Delilah in Las Vegas. This is H.wood Group founders John Terzian and Brian Toll’s first Sin City venue, and, yes, the popular chicken fingers and burger from the West Hollywood Delilah will be available. But the overall dinner menu at the sexy and opulent Vegas Delilah will be as ambitious and playful as any new restaurant on the Strip.

He’s also having a little fun with the concept too. Smith remembers eating off of TV trays when he was a kid, so he’s decided to make an upscale version of a TV dinner at Delilah. He’ll serve half of a roasted Bo Bo chicken from upstate New York on a wooden tray with some potatoes.

“It’s like something you’d find at a fine-dining restaurant as far as the sourcing and the steps we go through to put it on the plate,” Smith says of the crispy-skin chicken that’s tender and juicy on the inside. “But I just wanted it to be with pommes puree and a really rich chicken gravy that’s made with the bones and giblets.”

If there’s anybody you want in the kitchen for a big Vegas restaurant opening, it’s probably the 41-year-old Smith. He started working in the city’s restaurants as a teenager and became the executive chef at Seablue when he was 25. There, he dazzled guests with dishes like wood-fired octopus in tandoori spices with tabbouleh and turmeric-root sambal.

“I took a lot of pride in having a well-rounded menu with Southern French, Northern African, Spanish and Southern Italian influences,” Smith says. “I really wanted to encompass all of the Mediterranean.”

In between Seablue and Bardot, he cooked at respected restaurants around the country like Church & State in Los Angeles and L20 in Chicago. Over the years, he’s earned the respect of his Vegas peers for his ability to serve great food while running massive casino restaurants.

“He’s just the best fucking all-around chef in Vegas,” says James Trees, the prolific Vegas chef behind Esther’s Kitchen, Al Solito Posto, Ada’s Wine Bar and Resorts World’s Mozz Bar. “He keeps pushing and he’s willing to put up with the corporate bullshit and he deals with that environment really well. There’s no ceiling on his talent level.”

Trees, who built an off-Strip empire after working at Mina restaurants (but not in the same kitchens as Smith), remembers eating at Bardot and being floored by everything from the house-baked baguette to the king crab endive Caesar salad to the chicken liver mousse.

“It was all technically outstanding,” Trees says. “When Bardot was hand-grinding beef tartare, the texture was just ridiculous. It’s all the little things he does as a chef that makes a huge impact on a dish.”

At Bardot, Smith served a beef Wellington that Trees says “was the archetype.” At Delilah, Smith will make wagyu beef Wellington with 12 oz. of filet mignon, an herbed crepe, porcini mushroom duxelles and madeira wine jus.

“I truly believe I make the best beef Wellington in Vegas,” Smith says. “And we’ve improved it at Delilah.”

One key change is having the herbed crepe, instead of the prosciutto he used at Bardot.

“You can really smell the dill and the chervil and the parsley and the chives,” says Smith, who understands that Vegas dining should be a feast for the senses.

At Bardot, Smith had throwback desserts like baked Alaska. At Delilah, he’ll serve strawberry shortcake baked Alaska because he wants people who aren’t familiar with baked Alaska to order it. And who doesn’t like seeing things lit on fire tableside?

This mindset is a big part of Smith’s longtime success in Vegas. He loves classic technique and old-school spectacles but also knows how to build a modern scene in a city where dinner is often about partying.

“I wanted to bring the menu to a place where everything is very familiar,” Smith says. “I want it to be pretty straightforward. But there will be some surprises hiding beneath the surface. I just want to continue doing what I do, but I’ve presented everything in a package that I think will be very user-friendly to the guests.”

Smith is a chef who respects the works of others, so he went to L.A. to taste Delilah’s chicken tenders and burger and he’s recreating them faithfully. He’s even working with L.A. supplier Rocker Bros. to ensure that the burger blend is exactly the same.

At the same time, he realizes that Vegas is a place where things can and should be more over-the-top. In L.A., Delilah serves what it calls a “slutty brownie.” Smith has taken “the same flavor profile with the chocolate chip and the Oreo and the molten chocolate and the vanilla bean ice cream” but devised a more elaborate brownie presentation. Whether you consider this Vegas version more elegant or sluttier might depend on who you’re with and how many drinks you’ve had. The cocktails at the Vegas Delilah, not incidentally, are the work of Wynn mixologist Mariena Mercer Boarini. She was previously property mixologist at The Cosmopolitan, so she’s another Vegas veteran who knows how to run the show at gigantic casinos.

“You won’t believe it when you see it,” Smith says. “It’s this really beautiful alcove with its own bar and a chandelier over an eight-piece table, a really nice burl wood showpiece table. It has a little couch. It’s just a really cozy space for somebody that wants privacy. Or it’s for a group that wants to open the doors and be part of the kitchen experience and enjoy a tasting menu. But I’m aware that there are a lot of celebrities who want this room and want to just eat chicken tenders.”

Smith is down with whatever happens.

“People are at Delilah to have a really good time,” he says. “Nobody’s going to be afraid to let loose here.”