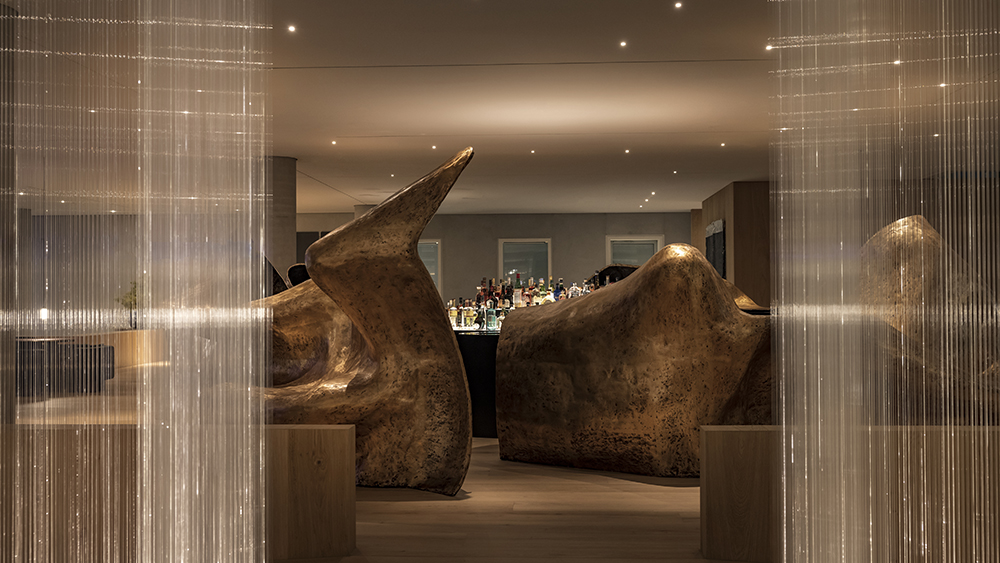 Fabulous food has long been central to Greece’s allure, from soulful old-world cuisine to exceptional fine-dining destinations. But Delta, in the ancient capital city of Athens, is a rarefied culinary experience far beyond clever riffs on Grandma’s moussaka. Located in a two-story, glass-walled space high atop the Renzo Piano–designed Stavros Niarchos Foundation Cultural Center (SNFCC), Delta claims the title as the city’s first progressive gastronomic destination.

A 23-foot, hand-hammered copper bar anchors the sleekly appointed restaurant, which offers a single nightly seating for just 12 tables. The first dish, a silken calamari steamed with plum-stone oil and lacquered in caramelized butter, sets the stage for the remainder of the evening’s incredible 17-course pageant of Greek ingredients prepared with Michelin-quality flair.

“We want to shake things up in Greek dining and present native ingredients in a refined, totally unique way, bringing in many of the techniques we learned in the Nordic countries,” says George Papazacharias, who, alongside Thanos Feskos, shares the title of head chef at Delta. The native Greeks and longtime friends returned home after more than a decade working in a range of Michelin three-star restaurants in Norway and Copenhagen, respectively.

There is only one seating per evening for the restaurant’s 12 tables.  Jérôme Galland

While many of the ingredients are quintessentially Greek, the use of Scandinavian preservation techniques is not. “These methods aren’t really done in Greece at all, but we consider them essential to sharpen and enhance flavors,” Papazacharias says. The nuance of that approach shines through in dishes such as a smooth clam served in tomato water perfumed with preserved bergamot, and a captivating chilled beeswax preparation with caramelized goat’s whey and fermented honey. The kitchen also adheres to zero-waste principles; items such as vegetable scraps find new life as a fermented seasoning for the decadent homemade bread.

The ingredients, sourced from small farms throughout Greece, are as impressive as any of the high-flown techniques. A rose sauce used to lace spring lamb is distilled from petals sourced from a specialty farm in the mountainous Peloponnese region. Traditional peppers hail from Thessaloniki, seafood from local fishermen and much of the rest from the restaurant’s own three-acre farm outside Athens.

Greek artistry is woven throughout the entire experience: Plates and bowls are the handiwork of Greek artisans, staff uniforms were styled by a Greek designer and the wine list is dense with expressions of native Greek varietals (try the fragrant, single-plot Thymiopoulos 2017 Naoussa Vrana Petra, a world-class expression of the Xinomavro grape, a popular red).

The chefs are already looking to next year, when they anticipate being able to source the entire menu from local farms and foraging, using nothing imported. “We want to become a landmark culinary destination and introduce the world to a new side of Greek cuisine,” Feskos says. It’s a bold ambition that feels entirely fitting—the Greeks, after all, know something about making a lasting impact.