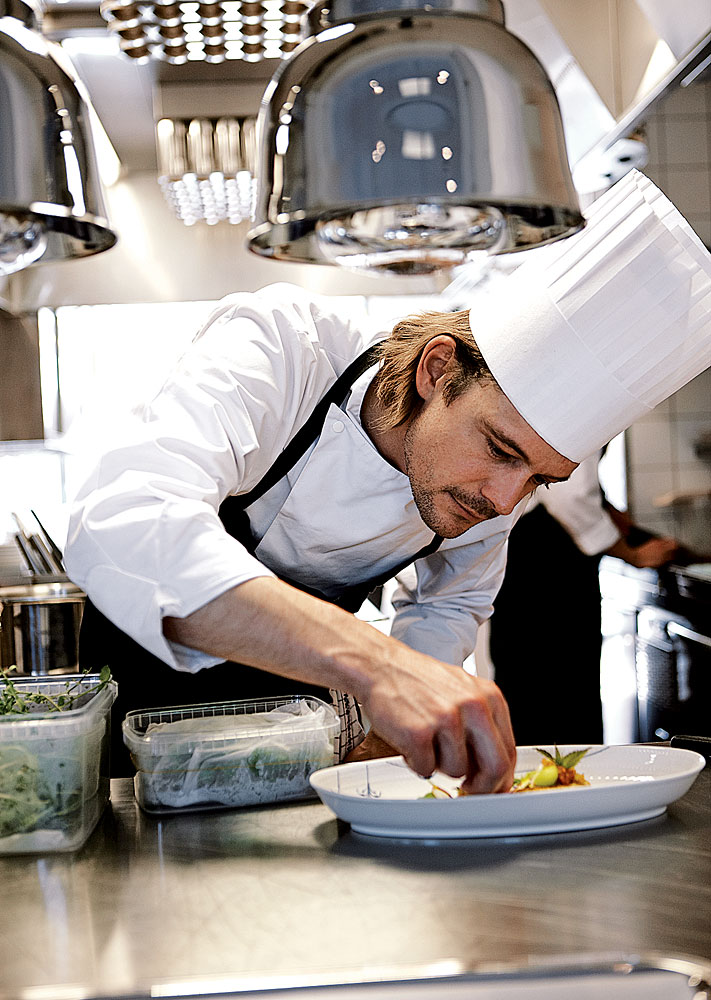 Standing at the edge of Tivoli Gardens—the 19th-century amusement park in Copenhagen that inspired Disneyland—one begins to understand why a recent U.S. study named Denmark the happiest country in the world. Happier still are those fortunate few who have the pleasure of being guests at the Gardens’ 13-suite Nimb hotel: Directly below them, on the hotel’s first floor, a “culinary palace” presents an array of gastronomic experiences including a bakery, a chocolate factory, a 1,300-label wine bar, a bistro, a gourmet hot-dog kiosk (with onions sautéed in goose fat), and the city’s newest fine-dining establishment, Res­taurant Herman.

“I wanted to celebrate the comfort food of Denmark, which at first might seem peasantlike,” says the restaurant’s namesake, chef Thomas Herman. Indeed, only a decade ago Copenhagen was a backwater of boiled meats and dreary vegetables. “Danes were rushing to France, Spain, and Italy for what they thought was great food,” says the 33-year-old chef. A native of Danish Jutland, he trained in Spain, first at the three-Michelin-starred Restaurant Arzak and later at the two-starred La Broche in Madrid. “But our food has extraordinary potential, especially if you’re willing to experiment with foreign ingredients, like foie gras whipped into berry porridge cream or truffles in the hunter’s stew; it suddenly becomes elegant and unlike any other country’s cuisine.”

The concept has hardly put diners off. Since Restaurant Herman opened in May 2008, its 13 tables have been reserved three months in advance. The prix-fixe menu consists of four to six courses of Danish cuisine that are enlivened by Herman’s signature twists: Nightly selections might include entrées such as glazed veal sweetbread with summer truffles, or squab with chanterelles. “I grew up with [traditional Danish] dishes, with everything preferably drowned in brown sauce,” says Herman. “But with a little finesse borrowed from other food traditions, they really become world-class.”

However, Herman is quick to point out that, without top-grade ingredients, even the finest technique will yield disappointing results. Happily for him, the hotel is owned by Denmark’s esteemed Grønlykke family, the dynasty behind Copenhagen’s Michelin-starred Kong Hans Kælder restaurant and, on the southern shore of the country’s Funen Island, Falsled Kro, a Relais & Châteaux property whose kitchen has long attracted globe-trotting gourmands. The family also purveys fine wines and gourmet cheeses from around the world, as well as the products from its own organic dairy and chocolate company. Herman became involved with the family in 2000, during his tenure at Kong Hans Kælder, where, as head chef, he earned the first Michelin star ever bestowed on a Copenhagen restaurant. He is now well on his way to adding yet another star to the 12 the city currently boasts.

In the meantime, he can take pride in the fact that he has added another attraction to the amusement park. Behind windows in the hotel lobby and dining room, visitors can watch the culinary magic unfold in the three kitchens. “We wanted to keep the production method as close as possible to our guests,” says Herman, as cooks and pastry chefs prepare the foods of the day over his shoulder. Meanwhile, the evening’s diners anticipate their feast while sipping aperitifs on the terrace overlooking the gardens. Surely they are, at this moment, the happiest people on earth.