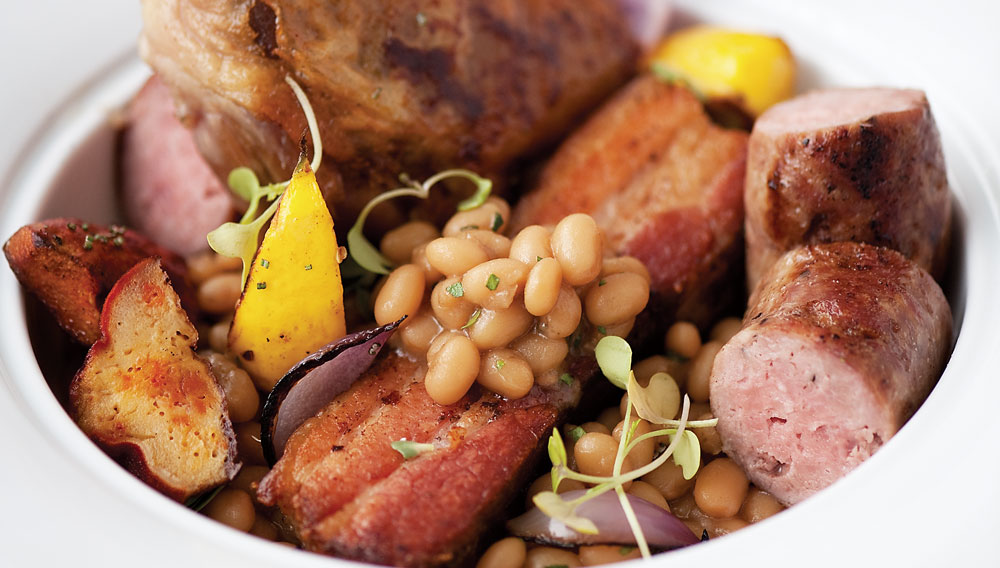 When word spread that hotelier Ian Schrager had taken control of Chicago’s aging Ambassador East Hotel and its ground-floor restaurant, the Pump Room, the city collectively gasped. In the minds of Chicagoans, the Pump Room was untouchable, the legendary hangout of Elizabeth Taylor and Frank Sinatra. Then Schrager announced plans to close, gut, and remake the Pump Room as an entirely new restaurant. The kicker: He would let the public decide whether to retain the moniker or name it something new.

Of course, people flocked to the restaurant’s website to vote overwhelmingly in favor of saving the name, and in October, the Pump Room reopened inside Schrager’s new Public Chicago. True to his word, he had obliterated the old-fashioned decor and put Jean-Georges Vongerichten in charge of the kitchen. The crystal chandeliers were stripped from the rafters but saved and transformed into a stunning art installation above the hotel’s entrance. The restaurant is immediately more casual, but also infinitely more festive and glamorous, and more in tune with the times. Constellations of glowing, sand-colored orbs dangle from every inch of the ceiling above a warm, contemporary dining room. Booth One, the prestige table, is still there, although fittingly sleeker. Its antique landline phone is still there, too, displayed as a curious relic.

Celebrities, politicians, food-obsessed hipsters, the ladies who lunch . . . everybody wants in. The Pump Room is once again the hottest game in town—in what is already one of the most exciting dining cities in America. For much of the past decade, the scene has been dominated by the incomparably creative Grant Achatz and his modernist restaurant Alinea, which is often wagered to be the best in the world. But in the last year or two, Chicago has entered a remarkable new era, with a list of extraordinary new luxury dining rooms and innovative young chefs. Even Achatz is outdoing himself.

Last year he opened the Aviary, a stunningly inventive cocktail lounge, and Next, an ever-changing, culinary concert that sells tickets rather than taking reservations. Only 62 seats are available each night, and every 90 days or so, Achatz and executive chef David Beran introduce a different theme, typically 11 or 12 courses. The premiere brought Escoffier back to life, with circa-1906 dishes such as truffled egg custard and whole pressed duck. For the production that ran through mid-January, the theme was childhood, with complex and delightful allusions to macaroni and cheese and chicken noodle soup. Each theme becomes an iPad magazine with videos, photos, essays, and recipes. But tickets are notoriously hard to come by: Next releases them on its website 30 days out, and they are snapped up instantly. A few same-day tickets are offered almost daily on Facebook.

At the Pump Room, Vongerichten’s locavore-leaning menu is being impeccably executed by Bradford Philips, a veteran of Chicago powerhouses Blackbird and Tru. They have taken locavorism out of its crunchy-granola stereotype and into the world of high fashion and decadence, serving dishes like fried organic chicken with a chili glaze, or tagliatelle with caramelized Brussels sprouts and pistachio pesto, without a scrap of reclaimed wood in sight.

Also celebrating the glamorous life is Ria, a posh dining room inside the Elysian where most guests begin with Champagne (perhaps a special cuvée of Pommery available nowhere else in the United States) and go on to an embarrassment of sea urchin, caviar, foie gras, and truffles. But this is not merely a place to spend oodles of money on modern French cuisine; it is an impressive culinary stage where the spotlight shines on chef Danny Grant, one of the city’s fastest-rising stars. He air-dries and roasts a duck Peking-style, just to serve a small slice alongside a cabbage-wrapped roulade of duck confit and a thimble-sized lump of poached foie gras.

Other bright lights include Stephanie Izard at Girl & the Goat, who has made her name on daring combinations and head-to-tail attitude (say, escargot ravioli with bacon and miso-tamarind sauce). At Perennial Virant, Paul Virant serves an equally imaginative menu, firmly rooted in the Midwest (parsnip pierogi, pork loin au poivre). And at Henri, Chi­cago veteran Dirk Flannigan strides confidently ahead with dishes like game-bird consommé with liver mousse and a poached egg. Henri’s dining room is a phenomenally pretty space in a vintage high-rise with a facade by Louis Henri Sullivan, the famous turn-of-the-century Chicago architect. Another legend reborn.