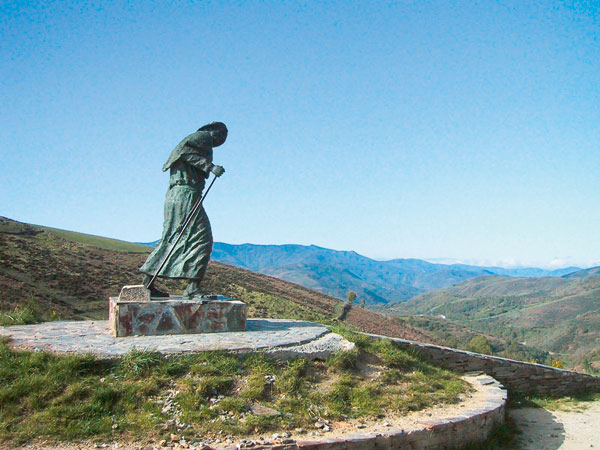 A May rainstorm was turning to snow, and I had another 12 miles to hike before lunch. Pushing through the glazing mud, I consoled myself by remembering that countless thousands from the far ends of Europe, many barefoot and threadbare, had preceded me up this steep, forested pass in the foothills of the Basque Pyrenees. Yet these seekers had enjoyed the advantage of an unshakable faith that drove them across northern Spain, through the regions of Navarra, La Rioja, Castilla y León, and Galicia, to pray at one of Christianity’s most hallowed sites: the tomb of St. James in Santiago de Compostela.

After navigating the chute—a path trod by pilgrims since the Middle Ages—I finally conquered the summit. That night, revived by savory bowls of Navarran lamb stew, my companions and I inspected our blisters and debated whether we would survive the two-week trek to Santiago. (Click image to enlarge)

Listening attentively was our guide, Judy Colaneri, an Aspen-based chef who, while hiking the Camino de Santiago in 1994, fell so in love with the pilgrimage that she walked it another five times before creating her company, Spanish Steps. She now spends half the year in Spain offering escorted hiking tours that combine her two passions: Spanish cuisine and pilgrimages along the Camino.

Once nearly forgotten, the Camino has enjoyed a rebirth during the last 20 years, with a record 200,000 people expected to make the trek in 2004. Some travel the ancient route to fulfill vows or petition miracles; others to enjoy the breathtaking scenery, Templar castles, and local gastronomy and wines. Many modern pilgrims walk all 500 miles from Roncesvalles on the French border, spending fitful nights in government-operated barracks. But Colaneri exorcises the guilt from her pampered charges by reminding that illustrious persons in the Middle Ages accomplished the journey in style, riding on horseback or in a carriage and staying in the finest castles. She insists that one need not suffer the slings of budget travel to earn the Camino’s blessings.

Colaneri rewards her weary walkers at the end of each day by transporting them by van to rural inns, monasteries, and restaurants. At the Hotel Loizu in Burguete, only a fly cast from a stream fished by Ernest Hemingway, I ordered the writer’s two favorite dishes: sopa de verdura (vegetable soup) and trucha a la Navarra (stuffed trout). Later, at the inn’s bar, I sipped txakoli, a dry Basque spirit, and reflected upon the day’s sobering encounter: an underground silo that held the excavated bones of thousands of medieval pilgrims who died before reaching Santiago.

Farther west, amid the bucolic hills of La Rioja, I savored peppers and chorizo cooked in red wine at the Meson Las Glosas, a rustic restaurant next to the restored monastery of San Millán de la Cogolla. In the isolated mountain village of O Cebreiro, after a steep climb through a Galician pass once invaded by Napoleon’s army, I enjoyed steak and roasted potatoes at the Hospedería San Giraldo de Aurillac, run by the family of a now-deceased legend of the Camino. In the 1960s, the local parish priest, Elias Valina Sampedro, helped revive the pilgrimage with both his scholarship and toil; he painted many of the ubiquitous yellow arrows on rocks and trees to mark the way. His sister and niece now deem it a religious vocation to feed their guests hearty meals.

On the last day of our journey, Colaneri led us through a drizzling fog to Monte de Gozo, the ascent where medieval seekers first glimpsed the spires of Santiago and fell to their knees in gratitude for surviving the ordeal. Tradition permits each pilgrim to climb the high altar and whisper a petition while hugging the statue of St. James. If my wish comes true, I will one day undertake a second pilgrimage—in penance for the sin of gluttony on my first.