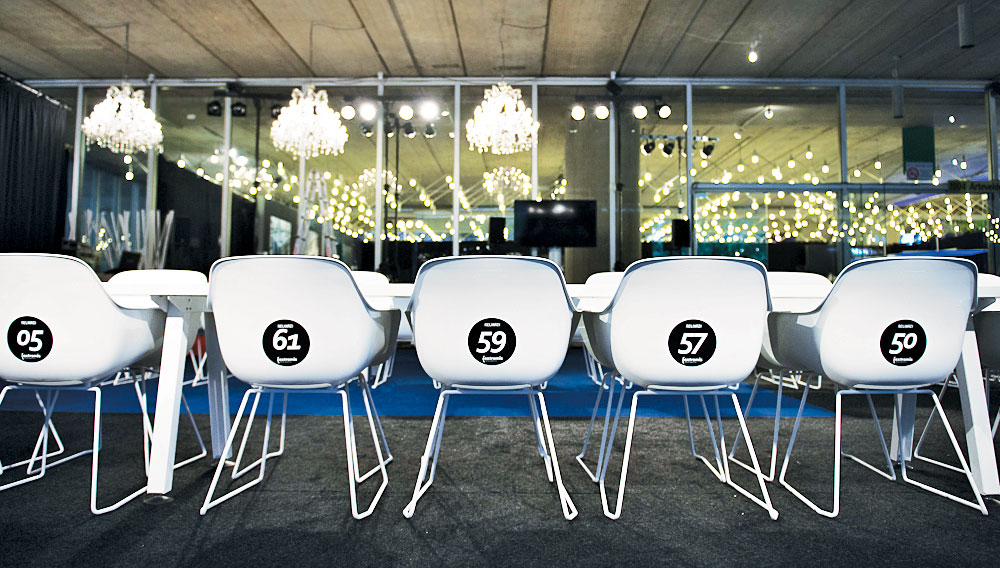 Is it art or is it dinner? At the gastronomic road show known as Gelinaz, the question is unavoidable.

Consider, for example, what happened on the night of September 9, 2013. On an outdoor terrace in Lima, Peru, overlooking ancient Incan ruins, 24 of the world’s best chefs—including Albert Adrià of Barcelona’s Tickets, René Redzepi of Copenhagen’s Noma, and Daniel Humm of New York’s Eleven Madison Park—gathered to experiment with a single recipe. Over the course of 9 hours, they served 24 interpretations of the Peruvian chef Gastón Acurio’s octopus en cilindro to 76 guests, each of whom had paid $750 for a seat (literally: Ticket buyers were allowed to take their chairs with them at dinner’s end). In between courses, there was a partial screening of the avant-garde film Koyaanisqatsi, an interpretive-dance performance, and a parade of muscular men, clad only in their underwear, bearing whole octopuses.

The brainstorm of Andrea Petrini, a writer and culinary bon vivant who has launched several innovative chefs’ gatherings, Gelinaz originated in 2005, when the great Italian chef Fulvio Pierangelini complained that others were copying his recipes. Petrini suggested embracing the problem rather than fighting it, and he invited a handful of young, ambitious chefs to interpret one of Pierangelini’s signature dishes. The event fell dormant for several years, but it was revived this June in Ghent, Belgium, when 23 chefs came, at Petrini’s behest, to interpret an aspic-and-chicken timbale created by the 19th-century Belgian food writer Philippe Edouard Cauderlier.

The Lima event was the modern Gelinaz’s second incarnation; a third event is planned for April 2014 in New York, with the dish yet to be announced. Petrini sees the gatherings as performances rather than dinners and believes that their collaborative environment fosters creativity. “It’s a short life if you live it alone,” he says. “But get people together, and you can bring something out in them.”

Massimo Bottura, the chef at Osteria Francescana in Modena, Italy, agrees. “In the past, every chef used to work alone in his kitchen and guard his secrets,” says Bottura, who participated in the Lima event. “But the best part of Gelinaz is what you see in the kitchen: a bunch of guys helping plate another guy’s dish.”

Indeed, collaboration was at the heart of two of the Lima Gelinaz’s most successful dishes. Daniel Patterson of San Francisco’s Coi made a vibrant red-and-yellow-pepper soup to which Bottura added—actually, splattered—octopus ink. And Mauro Colagreco of Mirazur in Menton, France, made a broth from all of the other chefs’ broths—a flavorful reversal of the aphorism about too many cooks.

Which is not to say that every recipe works. In Ghent, Redzepi made one of the night’s most delicious dishes, based on the idea that when it comes to chicken, “the skin is the best part.” But his attempt in Peru to address octopus—an ingredient he had little experience cooking—did not fare well, and the chef ended up making a potato dish. “Gelinaz matters because it allows for failure,” says the Swedish food journalist Mattias Kroon, who has attended both of the events. “In their restaurants, these chefs have to achieve excellence every day. But at Gelinaz, they don’t. They can fail, which I think allows them to be freer. It’s a playground.”