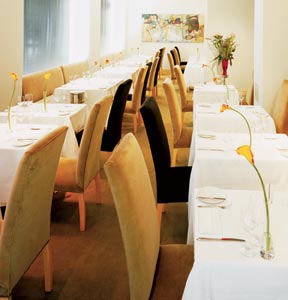 this town in the past no longer adequately characterizes the ethnically diverse,

sophisticated metropolis that is now Canada’s largest city. The influx of

immigrants from the world over translates to a polyglot assortment of cuisines,

neighborhood. A surprisingly good trattoria may reside in a nondescript suburban

strip mall, and a hungry diner can find some of the best dim sum this side of

Hong Kong without even visiting Toronto’s Chinatown. As a consequence, Toronto

is a city of educated foodies, and with this much authenticity at hand, a chef’s

Claudio Aprile, executive chef at Senses restaurant in the SoHo Metropolitan hotel, has thrived in this demanding milieu. His extensive training has taken him from South America to Asia, Europe, and finally to North America, where he practiced his craft at other fine establishments before arriving at Senses. Under his direction, Senses became the first establishment in Canada invited to host a Friends of James Beard benefit, in October 2003.

The restaurant’s name is fitting, because an Aprile-orchestrated dinner exercises all five senses. To begin with the sense of taste is to state the obvious, but it would be a disservice to Aprile not to elaborate. His prawn seviche, for example, dances on the tongue with a freshness enhanced by a light touch of yuzu juice. Yuzu, a trendy Japanese member of the citrus family, is a natural complement to the chilled taste of the sea, and the fruit appears in different guises twice again during the meal—as a palate-cleanser and in a dessert.

Moving on to sight could lead to a multichapter discourse, but consider the soup selection: A simple, lidded white bowl arrives with a slice of mushroom/green-tea noodle tempura set on top. The bowl rests in a bath of hot water and lemon slices. Lifting the lid unleashes the companion aroma of an intense mushroom and miso soup, all presented with a flourish and perfectly paired with the garnet emanating from a glass of Pinot Noir. Seldom has mushroom soup inspired such a color palette.

The sense of touch is fully engaged by the silkiest foie gras appetizer that melts between tongue and palate before it is followed by a chewy chaser of Peking duck. A refresher of yuzu-spiced water and cranberry slush presents the case for smell, for it comes with a side of hot stone sprinkled with cinnamon (not for ingestion) that aids in clearing the sinus passages for the main course.

Finally, hearing comes into play. With each of its 36 seats filled, the room, decorated in a minimalist if not stark fashion, hums with laughter and conversation, driven by a lively soundtrack mix of jazz and rhythm and blues that was compiled for the restaurant by its owner, 40-year-old Henry Wu, who also presides over Canada’s three Metropolitan-brand hotels.

North American music selected by the Hong Kong–raised owner of a restaurant led by a Uruguayan-born chef who trained on four continents. Indeed, this must be an evening in Toronto.