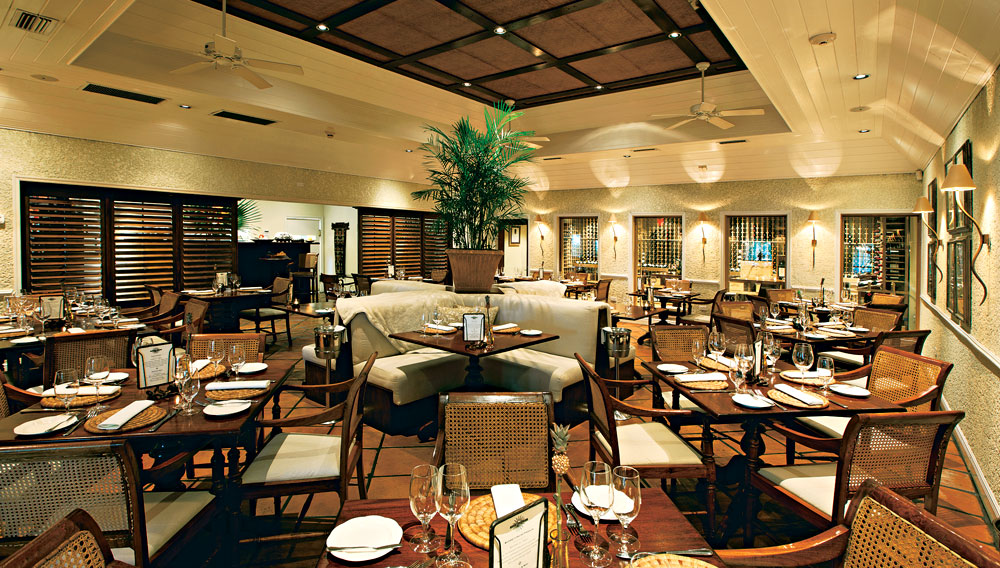 When Cindy Hutson serves yellowfin tuna tartare at Ortanique, her restaurant in Coral Gables, Fla., it is pressed into a ring mold and topped with a layer of guacamole. But today Hutson is on Grand Cayman, and she is scooping the gleaming fresh tartare into crisp breadfruit cups. And because breadfruit is in season, she is also deep-frying slices to garnish other plates, using it in her “carrot cake,” and making a breadfruit gratin. “Cooking on an island,” she says, “you have to be creative.”

That is especially true on Grand Cayman. The 76-square-mile Caribbean island is covered with unproductive, salty soil that has long doomed attempts to establish plantations. As recently as 2005, when Blue by Eric Ripert opened at the Ritz-Carlton, restaurants relied on produce flown in from Florida and, incredibly, frozen fish from New York. But now a new group of chefs has joined Ripert, and they have brought the locavore movement with them, turning to the island’s small-boat fishermen for wahoo, yellowfin, grouper, snapper, and tilefish, and buying produce from Grand Cayman’s small band of farmers. The results are Caribbean flavors with fine-dining finesse, and dishes based on local produce, fish, and culinary traditions.

The most dramatic revolution involves produce. Joel Wal­ton, the gourmand CEO of the Maritime Authority of the Cayman Islands, composted hurricane debris to build the soil for his Plantation House estate, which is laden with ackee, soursops, callaloo, tomatoes, and nearly 200 other fruits, nuts, and spices. The farm opens for tours on Sundays, and Walton also sells at the Bodden Town district’s ever-growing Saturday farmers’ market. Former landscape grower Patrick Panton dominates that market and a newer Camana Bay Wednesday market with tasty exotics such as meaty winged beans and Asian bitter melon that he coaxes from a patch of recently cleared central upland. The latest supplier to the chefs, Stephen Herron, raises microgreens and tomatoes in shaded hydroponic flats.

The chefs—including Hutson, Dean James Max (chef at the Bras­serie), Michael Schwartz (owner of Michael’s Genuine Food & Drink), and Luis Lujan (chef de cuisine at Blue)—jokingly bicker about who has dibs on Herron’s pea shoots to pair with roasted snapper, or on the first harvest of Cayman seasoning peppers, which might give a fruity piquancy to a tilefish seviche. Max, the South Florida seafood star, sources even closer to home: He grows produce, from lemongrass to callaloo, in raised beds outside the restaurant, which inspires “a modern twist on traditional dishes,” says Max, citing the darkly savory Cayman-farmed turtle braised with onions, Scotch bonnet peppers, and allspice.

Max’s partner, real estate magnate and avid sportfisherman Clarence “King” Flowers, is the local expert on finding fish, including five different species of snapper that might end up poached in a coconut-smoothed fish stock to make Caymanian fish tea. And the Brasserie has two private fishing boats to bring them in.

“When the fisherman calls in,” Max says, “we can finish the menu.”