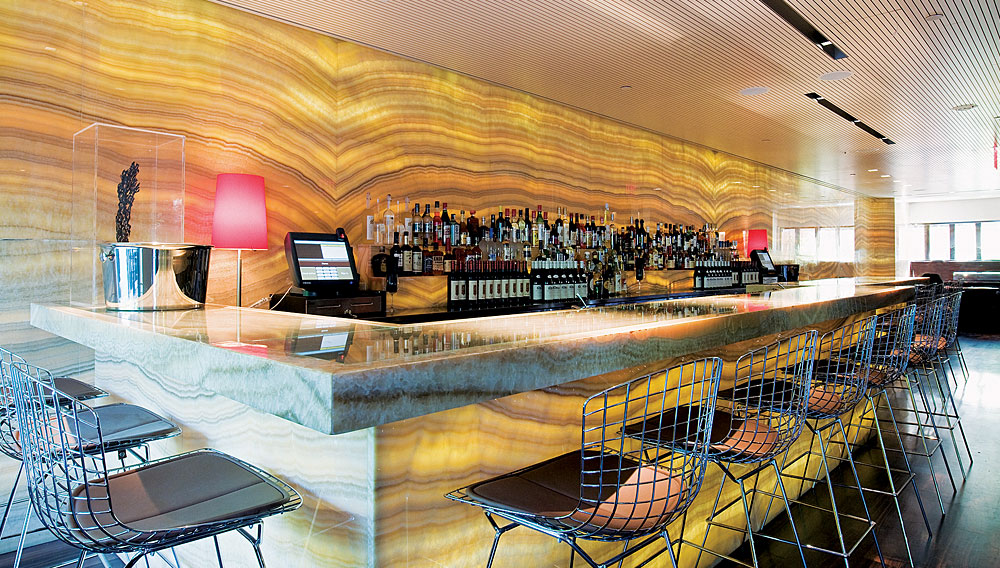 “I apply Coco Chanel’s theory of getting dressed to my cooking,” says Michael White, the Michelin-starred chef of Manhattan’s new and already highly acclaimed Italian seafood restaurant Marea. “It’s the culinary equivalent of removing one accessory before you walk out the door. In other words, the food should taste like what it’s supposed to taste like.”

White’s approach to cuisine is perhaps best illustrated by his inventive interpretation of crudo, the Italian answer to sushi. He dresses a sliver of raw fluke, for example, in fresh lemon thyme instead of the customary lemon juice, believing that the latter masks rather than enhances the delicate sweetness of the lean fish. He also embellishes sea urchin with a dab of lardo (the seasoned fat of pig shoulder) and a sprinkle of olive oil and sea salt to produce a combination of flavors that is delicious and unusual without being contrived.

Italian cuisine of this caliber—scarce even in Europe—is a rarity in the United States, where Italian-American traditions still tend to dominate popular perceptions of Italian cooking. “Many Americans think it’s about big portions and lots of garlic,” says restaurateur Chris Cannon, who, with White, runs two other fine-dining restaurants in New York, Convivio and Alto. The menus of these restaurants draw on the flavors of southern and northern Italy, respectively. “Even in Italy,” says Cannon, “when chefs go high-end, they tend to get constricted and start applying French technique. Both scenarios are antithetical to true Italian expression.”

Just as the best Italian design—whether of fashion, furnishings, or cars—emphasizes sophistication and elegance, so does the best Italian food. Although White is a native son of Wisconsin, he cooks—or, in the case of his crudo creations, prepares uncooked food—as if he were reared on coastal Italian recipes. His foray into fine Italian cuisine began two decades ago, when he worked for about six years under chef Paul Bartolotta at Chicago’s Spiaggia. However, White’s “Italian transformation,” as he calls it, came shortly after he left Chicago for Imola, Italy, where he met his wife and spent the next seven years working at Ristorante San Domenico. There, he learned from chef Valentino Marcattilii to respect regional and natural flavors.

Now back in the States, White rarely departs from the techniques he learned in Marcattilii’s kitchen, though he does incorporate into his dishes nontraditional ingredients, such as Hawaiian blue prawns, alongside traditional favorites including mackerel, flying fish, and tuna belly. Other creations include the dentice, which consists of paper-thin slices of red snapper layered over a mound of panzanella (a salad made from whole-wheat bread, heirloom tomatoes, green olives, and fragrant basil), and the seppia, a tagliatelle made from ribbons of raw cuttlefish and dressed with flecks of bottarga (the dried and compressed roe of red mullet) and a rough soffritto of minced raw vegetables.

Myriad forms of pasta also are on Marea’s menu. A bold fusilli’s springy corkscrews stand up admirably to a decadent accompaniment of red-wine-braised baby octopus and bone marrow, and a light spaghetti is served with a crab-and-sea-urchin sauce.

Despite the serious thought and skill that White puts into these dishes, he encourages diners to have fun with his sophisticated yet relaxed menus. “If they want truffles in blue jeans, great,” says White. “That’s how I like to eat.”