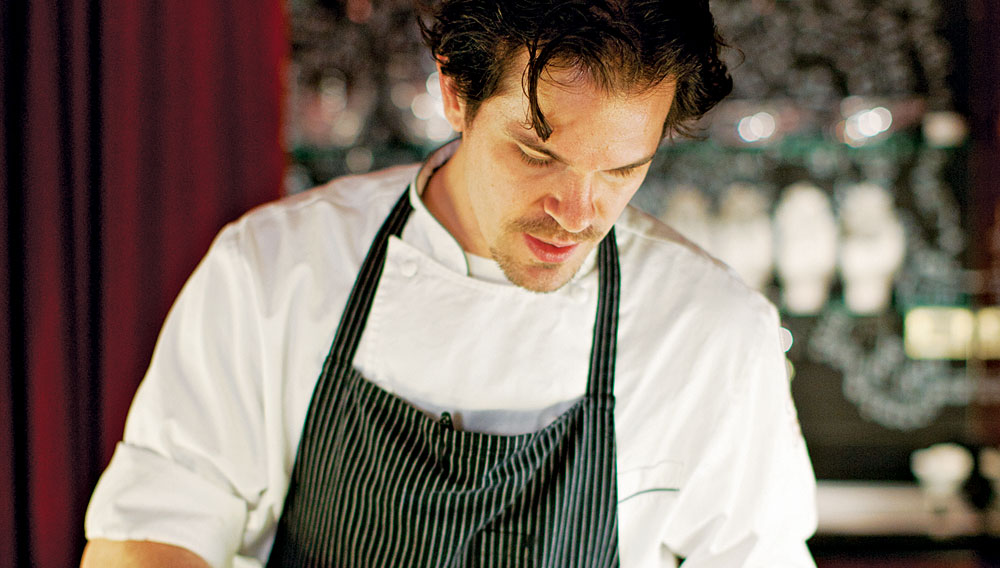 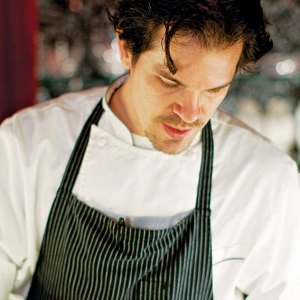 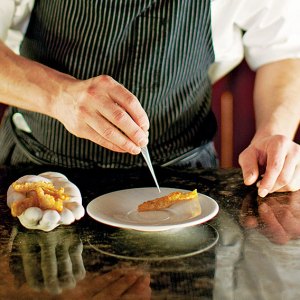 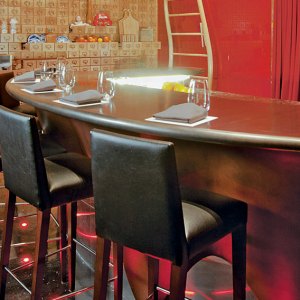 A curiously foggy domed glass bowl arrives at the table. When the sous-chef lifts the top, orangewood smoke wafts into the air, revealing a single raw oyster bathed in a briny escabeche and sweet honey foam. It is a spectacular presentation—and a pretty good smoked oyster—at the latest hot ticket in Las Vegas: José Andrés’ new micro-restaurant é. This hidden gem is a mere eight-seat space tucked into Andrés’ tapas restaurant Jaleo at the new Cosmopolitan hotel, which opened on the Strip in December.

It is a given (or at least it had been a given in prerecession Las Vegas) that every new megaresort comes fully equipped with its own blockbuster lineup of exclusive dining and drinking spots. And for now, that trend continues with the Cosmopolitan, a 50-story, 2,995-room hotel-casino that boasts 13 dining establishments new to the city. In addition to Jaleo and é, Andrés has opened China Poblano, his much-anticipated Chinese/Mexican restaurant, while Scott Conant unveiled a new Scarpetta, as well as a wine bar called D.O.C.G., after the Italian wine industry designation, Denominazione di Origine Controllata e Garantita, offering a roughly 300-bottle Italian list for pairing with truly exceptional dishes such as grilled filone bread with duck-egg fondue.

The Cosmopolitan is also home to an Estiatorio Milos, the polished Greek seafood house, plus a Blue Ribbon Sushi Bar & Grill from New York restaurateur brothers Bruce and Eric Bromberg. Other notables include STK, where scenesters get their protein fix in Los Angeles, New York, and Miami, and a branch of Comme Ça, chef David Myers’ brasserie by way of Los Angeles, faithfully reproduced down to the chalkboard walls and showman bartenders mixing concoctions from seasonal herbs, fruits, and spices.

But for those looking for buzz and bragging rights, the money is on Andrés, the celebrity chef who ignited the Spanish cooking craze in America. At China Poblano, Andrés plays with Chinese and Mexican dishes on the same menu, not the same plate. Think lobster tacos with chili sauce and a pomegranate margarita, or a jiggly strawberry dessert called Happy Buddha Giggling Taking a Bath. His more compelling fare, however, is at é—a restaurant Andrés managed to keep so under the radar that even the most vigilant food bloggers were caught by surprise.

“To understand é, we need to go backwards a little bit,” he says. “I have had restaurants where I served hundreds, even thousands of people a week, but as a chef-artist there are certain things you cannot do for the masses.”

At é, there are just two seatings of eight diners, only five nights a week. These lucky individuals sit at a tall, half-circle table surrounded by surrealist furnishings and are attended to by three chefs and three servers. Among the 15-plus small plates on the evening’s set menu is a Spanish langoustine called cigala with rose-scented foam; José’s Taco, a dollop of black Riofrio caviar wrapped in a thin slice of Iberico ham; and that inspired smoked oyster. It is a big show in a small space, and reservations are only available via e-mail a month in advance—unless diners book the entire room for $3,000.

The Cosmopolitan of Las Vegas, 702.698.7000, www.cosmopolitanlasvegas.com. For reservations at é, reserve@ebyjoseandres.com.