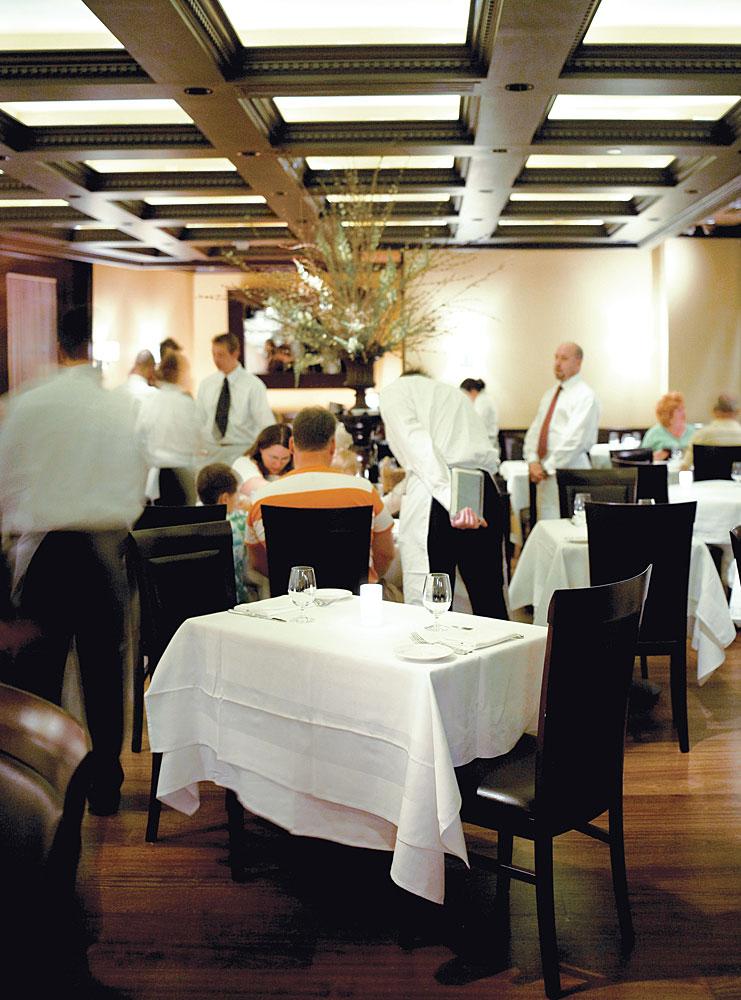 Mario Batali has been convinced that the Las Vegas scene is as sophisticated as any other—or at least that his new restaurant’s patrons are adventurous eaters. The menu for B&B Ristorante, the fine dining restaurant that Batali opened in April in the city’s Venetian hotel, includes four offal dishes. The word offal covers tongue, internal organs, and other meats that Americans rarely encounter at the family dinner table. These items are popular at Babbo, the flagship among Batali’s seven Manhattan restaurants, but he wondered whether the Venetian visitors would order them. “We weren’t sure that the more exotic dishes would fly, but we decided to send over the real thing,” Batali says, indicating that the recipes were not altered for the Las Vegas audience. He was delighted with the reception and the receipts. “We sell more lamb’s brain ravioli in Las Vegas than in New York,” he says. “That’s been true since B&B opened.”

Batali could be seen as arriving late to the Las Vegas restaurant party, but he wanted to enter on his own terms. He turned down half a dozen proposals before the Venetian approached him and negotiated a suitable deal—one that ensured he would retain control of the restaurant staff. “If I’m sending employees from my hometown,” he says, “it’s important that they work for me and not for a giant hotel company.” B&B Ristorante, which is named for Batali and his business partner, Joe Bastianich, resembles some of its New York cousins. The menu and the background music are like those of Babbo—diners enjoy sweetbreads dusted with fennel pollen to a sound track of Blondie and Beck—while the decor contains accents, such as the bar topped with Brazilian granite, that will remind patrons of the sumptuous interior of Del Posto.

B&B is nestled in a quiet corner of the Venetian, but that will change in December, when the Palazzo is completed. The $1.8 billion resort, which is being built by the corporation that owns the Venetian, will include a 50-story luxury hotel and more than 100,000 square feet of gaming space. The only entrance from the Venetian to the new complex will be built right near B&B.

Batali has been busy recently. In April, in addition to B&B, he opened Enoteca San Marco, a casual establishment, on the Venetian’s Piazza San Marco. He also oversaw the summer debuts of two Los Angeles restaurants: Pizzeria Mozza, a pizza place, and Osteria Mozza, which has a more extensive menu. He, Bastianich, and Nancy Silverton, who made the breads and pastries for La Brea Bakery and Campanile restaurant in Los Angeles, partnered on the L.A. projects. Batali also is preparing to launch what will be his fifth restaurant in less than a year: CarneVino, his first steak house, is expected to open in February at the Palazzo.

CarneVino’s location will be close to Emeril Lagasse’s Delmonico Steakhouse and a forthcoming branch of Wolfgang Puck’s Cut. However, Batali plans to feature a variety of beef that will be exclusive to CarneVino. The restaurant also will emphasize side dishes of fresh pasta. “I think we’ll create our own niche,” Batali says in reference to those other two steak houses. “I don’t have to beat those guys. I just have to live with them.”