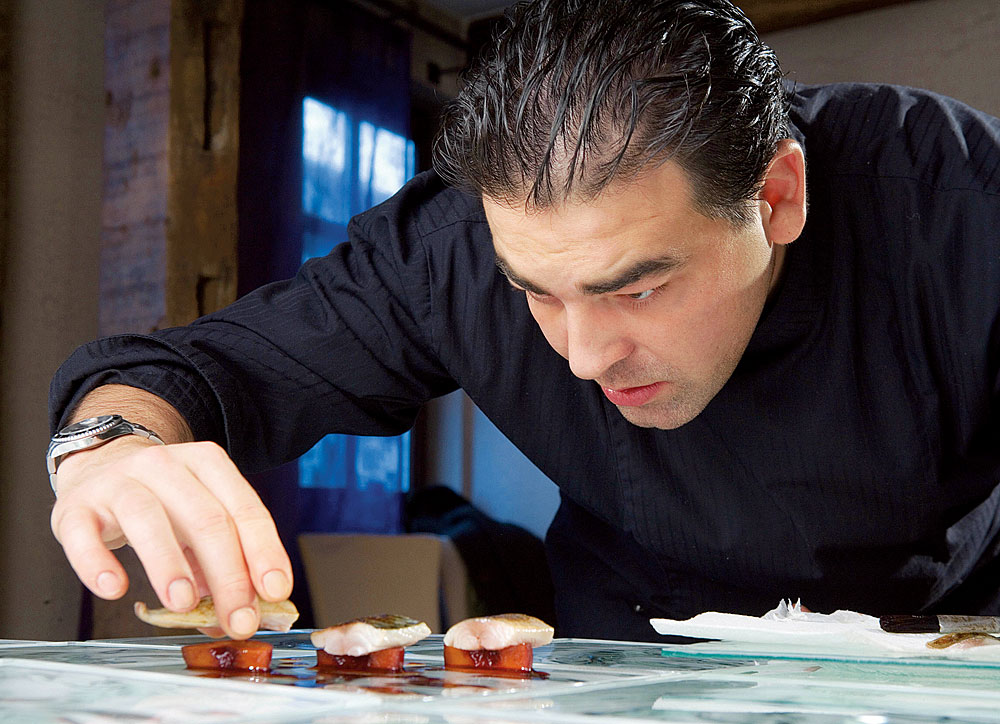 “It’s perfect,” says the taxi driver as he turns to face me. “The best food in Germany.” Although experience teaches the seasoned traveler to rely on the advice of cops and cab drivers for dining recommendations in an unfamiliar city, in this instance, as I survey this side street in the sleepy Frankfurt suburb of Langen, I note just a Weinstube across the street and a kebab house up ahead—and nothing to indicate that the neighborhood harbors a temple of haute cuisine.

Yet Restaurant Amador is indeed located here, in a three-story house built in 1760, the interior of which—with its low ceilings, wooden beams, and tables cloaked in beige linen—belies the opulence that issues from the establishment’s tiny kitchen. These dramatic culinary presentations are the inventions of chef Juan Amador, the German-born son of a couple from southern Spain. His cuisine joins his Spanish heritage and German sensibility with a flair for fusing contrasting flavors and an artist’s eye for visual effects. In November 2007, that combination earned him a place in Michelin’s pantheon of three-star culinary masters.

The 39-year-old Amador, who possesses the dashing good looks of a matador, is no stranger to acclaim: He apprenticed in some of Europe’s top kitchens from the age of 16 and earned his first Michelin star when he was 25. But it was a 1996 dinner at Ferran Adrià’s El Bulli restaurant (famed for its molecular cooking, which employs lasers, foams, and liquid nitrogen) that forever changed his way of thinking about food. “That meal made me feel inadequate,” Amador recalls. “Adrià performed amazingly: the art, the presentation, the small bites packed with taste. It was so different from any other restaurant in the world.”

That experience a dozen years ago continues to inform Amador’s creative direction, though he eschews the term molecular cooking to describe his particular style of food. “People think it consists of tricks and special effects,” he says. “It’s actually a new and very modern cuisine where the techniques happen to be important. But my cooking is also based on traditional French fare.”

Meals at Restaurant Amador begin with a series of eight or nine bite-size tapas, such as fluffy beet macaroons served with a cold pipette of apple-and-wasabi jelly, spoons of duck-liver ice cream, or “tomatoes in textures”—ice-cold tomato balls filled with tomato water, an anchovy filet accompanied by sun-dried tomatoes, and a tomato sorbet. Throughout the multiple servings of tapas, as well as the several small courses that follow, disparate elements—such as Iberian ham and fish—are married with sauces that harmonize both, a technique Amador calls mar y muntanya, referring to a blend of sea and land. Other dishes might include a filet of Mediterranean rouget garnished with a passion-fruit reduction, couscous made from cauliflower, or spinach sautéed in coffee-scented foam. Yet his deconstructed peach melba perhaps best characterizes his unique style of haute cuisine. “You don’t see it in its traditional form, with cut fruit and whipped cream,” says Amador of the dessert, which is presented in a cup of cream foam topped with raspberries and peaches that have been freeze-dried in a bath of liquid nitrogen. “But you feel it in your mouth. The flavors are distinct, but the texture is what you will remember.”

As evidenced by the restaurant’s solid reputation, few diners forget any of Amador’s provocative flavors. Amador modestly attributes this appeal in part to his Spanish descent. “German restaurants,” he observes, “don’t typically attract international attention.” Unless, that is, their chefs perform delicious gastronomic miracles in the sleepy suburbs of Frankfurt.