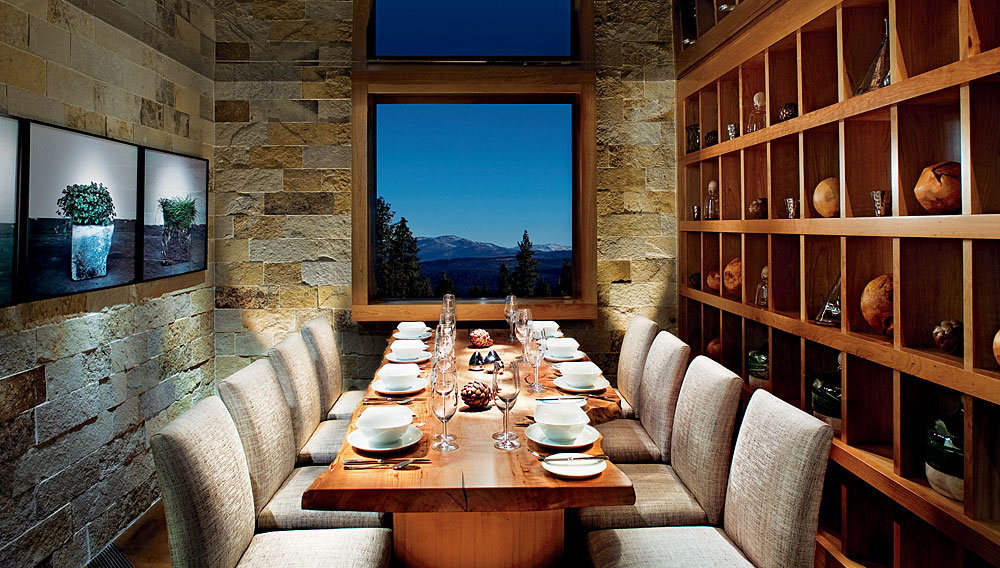 Riding ultrawide fluorescent-pink flowered skis, Traci Des Jardins darts around trees, bounds over moguls, and tucks into turns on the black-diamond backside at California’s Northstar-at-Tahoe Resort. The San Francisco–based chef is on a break from her work at Manzanita, the fine-dining establishment she debuted at Northstar’s Ritz-Carlton, Lake Tahoe, hotel last winter. But if opening a restaurant in Lake Tahoe was intended to increase her time on the slopes, Des Jardins’ plan has backfired. “I’ve only skied four days so far,” she says. “And they’ve been short days.”

Short days and long nights have been the norm during Des Jardins’ 27-year career as a chef. After growing up on a farm in California’s San Joaquin Valley—a childhood that included missing “at least a day of school” every week in winter to go skiing with her family—she worked as a teenager at Joachim Splichal’s 7th Street Bistro in Los Angeles. Apprenticeships with Alain Ducasse and other top French chefs followed before Des Jardins returned to Los Angeles to open Splichal’s Patina as chef de cuisine. She then moved to San Francisco, where she helped open Aqua and later became executive chef at Rubicon. In 1997, she started her own San Francisco establishment, Jardinière, with designer Pat Kuleto, and her French-inspired California cuisine has made the eatery a favorite in the city ever since.

Des Jardins now has five restaurants—including the casual Mijita Cocina Mexicana in the Ferry Building—but Manzanita is her first outside San Francisco. “I’ve always wanted to do a mountain restaurant,” she says. “When I started cooking, my idea was that I could cook and be a ski bum. But then I got serious about cooking and didn’t ski for about 10 years because I was always working.”

Named for a tree that is common throughout the Sierras, Manzanita itself is an anomaly in Lake Tahoe, where bar-and-grill food is standard fare. Operating a fine-dining restaurant in this remote setting has been challenging for Des Jardins, whose rural upbringing helped shape a farm-to-table philosophy. “There’s been a learning curve on how to procure the ingredients we want,” she says. “The weather can be a challenge up here, so you have to anticipate that you’re going to have five days when you don’t get any products.”

Though her options in the mountains may be limited, Des Jardins has embraced the setting with her menu. The chef—whose ideal post-ski meal is a “perfectly roasted chicken with fabulous mashed potatoes and mushrooms cooked with red wine”—serves hearty fare that might include a rib eye with wild mushrooms and new potatoes, or Cornish game hen with faro, carrots, snap peas, and a crispy egg. But Des Jardins’ menu evolves over time—as will her restaurant.

“We wanted Manzanita to be very flexible, so people could come in and get a burger and fries in the bar or sit down for a five-course tasting menu in the restaurant,” she says. “But restaurants become what they want to be. You have to listen to what the guests want.”

The interaction between guest and chef is facilitated by Manzanita’s design, which features an open kitchen on one side and windows overlooking Northstar’s Big Easy run on the other. The layout reminds patrons of this rare combination of a top chef in a mountain resort and, perhaps, allows Des Jardins to keep her eyes, if not her skis, on the slopes.