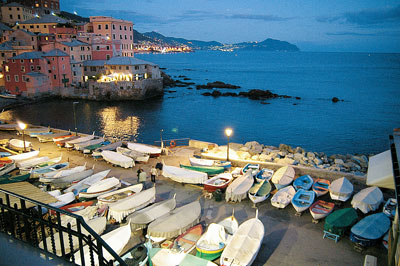 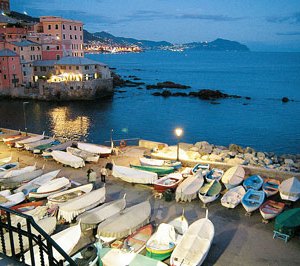 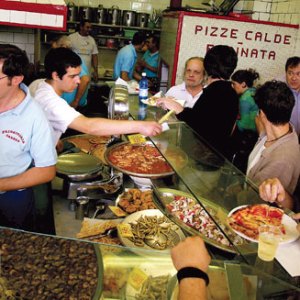 After a seven-course, five-wine feast, Tony May leans back in his seat outside I Tre Merli on the Genoa waterfront, examines the ash of his Cuban cigar, and smiles. “That,” he sighs, “was a meal.” May’s declaration carries considerable weight here in Italy, with his fellow travelers, and with his hosts. He is the owner of San Domenico NY, the author of Italian Cuisine (a textbook for U.S. and Italian culinary schools), and a member of Gruppo Ristoratori Italiani (GRI), an American association of owners and chefs of high-end Italian restaurants. Cigar in one hand and a shot of grappa in the other, May continues to discuss food with some of his GRI colleagues, while their guests from outside the trade listen raptly.

May and 15 other GRI members have just begun their annual version of a busman’s holiday to a region of Italy. They are spending a week barnstorming through Liguria, a sliver of coastline between the French Riviera and Tuscany, accompanied by a handful of gourmets who have come along to savor the wisdom of the professionals. (The next trip, to Abruzzi, is tentatively scheduled for late April. GRI will allow as many as 10 nonmembers to join this outing.

Among the nonrestaurateurs on the Liguria trip are Dr. Robert and Nancy Coombs of Alpena, Mich., who are making their fifth GRI sojourn since 1997, when they placed the winning bid on their first tour at GRI’s annual charity auction. “As always,” Robert says, “we go places we’d never have been without the GRI connection.” Nancy recalls that on an earlier trip to Emilia-Romagna, “Roberto Donna [chef of Galileo in Washington, D.C.] took us to eat a 16-layer lasagna with béchamel between each layer that was still only three inches high.”

Because GRI is the U.S. champion of fine Italian cuisine (the group sponsors the Italian curriculum of the Culinary Institute of America), Italian growers and processors eagerly showcase their foods and chefs fashion their most creative dishes to impress their visitors. In Liguria, every dinner and lunch includes the famed local pesto and twisted strands of troffie pasta. Between meals, the travelers visit mountaintop vineyards, sample olive oils pressed at various stages of ripeness, chat with porcini foragers, and prepare paper-thin chickpea crackers called farinata.

All of these elements converge in the deceptively simple Ligurian cuisine, as chef Lee Skawinski of Cinque Terre in Portland, Maine, notes while deconstructing various dishes. At a lunch in Albenga, he savors an egg-sized nodule of chopped raw veal topped with sliced porcinis and drizzled with green olive oil. The key component of the dish, he decides, is the sweet-tart base of an apple-infused sponge cake.

Later, at the estate of boutique wine producer Ca’ Lunae outside Ortonovo, the group tastes its way through the cellars and feasts on rabbit braised with rosemary and green olives. “Good wine, good food, good company,” says GRI chairman Paolo Secondo, swirling the last of a powerful red. “This is what life is all about.”