Dine at the Modern, located inside the Museum of Modern Art (MoMA) in Manhattan, and just as you are about to leave, a member of the wait staff will present you with a gift bag containing a cellophane-wrapped cake. The restaurant offers stollen, a German holiday fruitcake, from Thanksgiving until early January, and lemon or orange tea cakes during the rest of the year. Across town at Telepan, you depart the restaurant with a coconut macaroon in a glassine envelope. At Joël Robuchon at the MGM Grand in Las Vegas, female patrons receive a brioche that is large enough to feed four. The French Laundry in Yountville, Calif., sends you home with shortbread, and its Manhattan sibling, Per Se, offers French macaroon cookies.

These parting gifts might seem trifling, but they are intended as a surprise that will encourage you to return, perhaps with friends with whom you shared the goodies. “It’s a very competitive business, and restaurants need to set themselves apart,” says Telepan general manager Scott Mayger. Such treats usually denote an elite restaurant, one that can allocate enough resources to produce the items. At the French Laundry, for example, a kitchen staffer spends five to six hours making 400 pieces of shortbread and packing them in the 80 bags that the restaurant distributes on an average night.

American restaurants’ offerings of after-dinner treats likely are rooted in the French practice of giving diners leftover pastries and breads. Robuchon used to send patrons home with loaves of bread from Jamin, his main Paris restaurant from 1981 to 1993. According to Loic Launay, general manager of Joël Robuchon, the chef began offering bread at his Vegas restaurant after a celebrity patron raved to Robuchon about the bread she had received following a Jamin dinner years earlier. (Robuchon later switched to brioche for the convenience of diners who are staying in hotels and thus may not have ready access to a butter knife.) “Because brioche is a big pastry, we cannot give it to everybody,” Launay says, explaining why the treats are given to women only. “They are also expensive. It’s a lot of work to do the brioche.”

No doubt, creating these treats is more work than most restaurants care to do. However, Telepan’s Mayger is not concerned that one restaurant’s gift could become another’s obligation. “Are we teaching customers to go to another restaurant and ask, ‘Why don’t you do this here?’ ” he asks. “Yes, we probably are.” 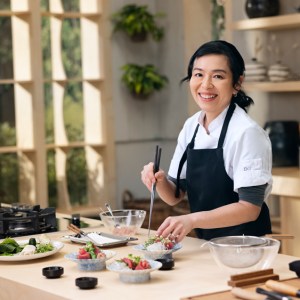