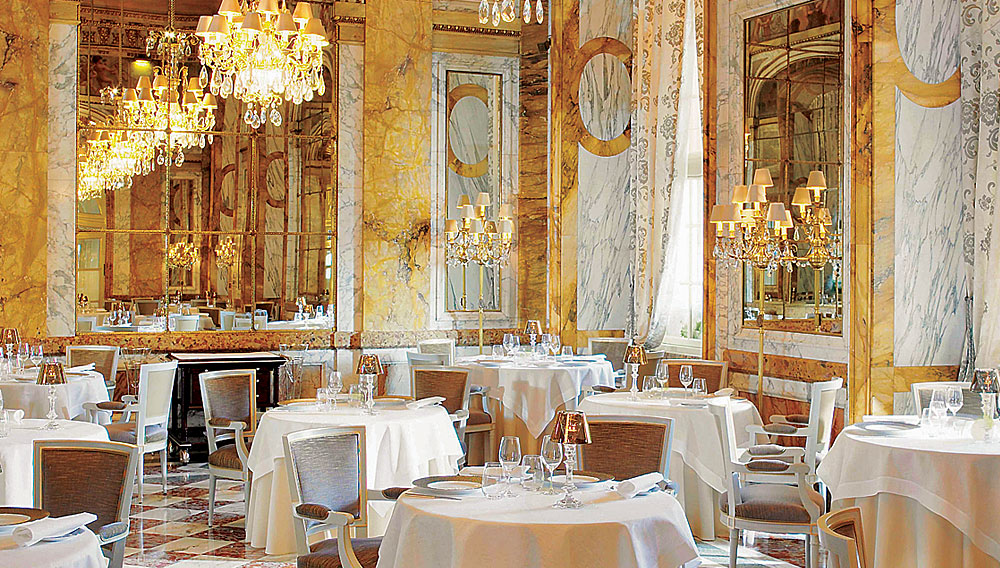 ‘‘The room is like a museum,’’ says 28-year-old Christopher Hache of the recently revamped dining salon at Hôtel de Crillon’s Les Ambassadeurs, the century-old Parisian temple of gastronomy where, in April, he took charge of the kitchen. Once the ballroom of an 18th-century private palace and now a historic monument, the majestic space is filled with light that streams through Champagne-colored draperies, new linens that accent the gold marble molding, and dinnerware that reflects the glitter of crystal chandeliers and gilded mirrors. Yet the room’s splendor contrasts acutely with the deliciously understated fare the chef puts on the plates.

“The decoration is very heavy, so my presentation is simple,” says Hache, one of the youngest culinary artists to run a Paris establishment of Les Ambassadeurs’ stature. His dishes are refreshingly straightforward, though each is enhanced by what he calls “a touch of eccentricity.” He serves roasted langoustines, for instance, with fried fennel and a zesty yuzu sauce. He also challenges diners’ expectations with dishes such as rack of lamb wrapped in ultrafine rice noodles and plated with Provençal eggplant on a bed of nutty quinoa. But his most-likely-to-be-imitated dish is a casserole starter of pot-roasted duck foie gras and vegetables. To showcase seasonal ingredients, he regularly changes two menu items.

While patrons enjoy the youthful Hache’s novel cuisine, they have the benefit of longtime sommelier David Biraud’s wisdom in pairing fine wines to their selections. Biraud, who recently placed third in the Best Sommelier in the World competition, often steers diners from overseas toward his exhaustive lists of vintages from Bordeaux and Burgundy. However, he is not an oenophilic chauvinist: He generally suggests New World wines to his French clientele.

The Hôtel de Crillon is betting on Hache and Biraud to restore the Michelin stars awarded to the restaurant during former chef Jean-François Piège’s tenure. Despite his young age, the new chef is a veteran of high-stakes competition. He cut his teeth under Eric Briffard (now chef at Le Cinq), honed his skills under the legendary Alain Senderens, and was Eric Fréchon’s top sous-chef in a successful campaign to earn a third Michelin star at Hôtel Le Bristol.

Now in the grand surroundings of Les Ambassadeurs, Hache perfects his own unpretentious yet tantalizing style. He credits his grandmother, who cooked for his family’s small guesthouse, as his original inspiration. This perhaps explains why half of his staff are women, including his lead sous-chef—a rarity in top Parisian restaurants. “When you work with women,” he says, “you cook with your heart.”