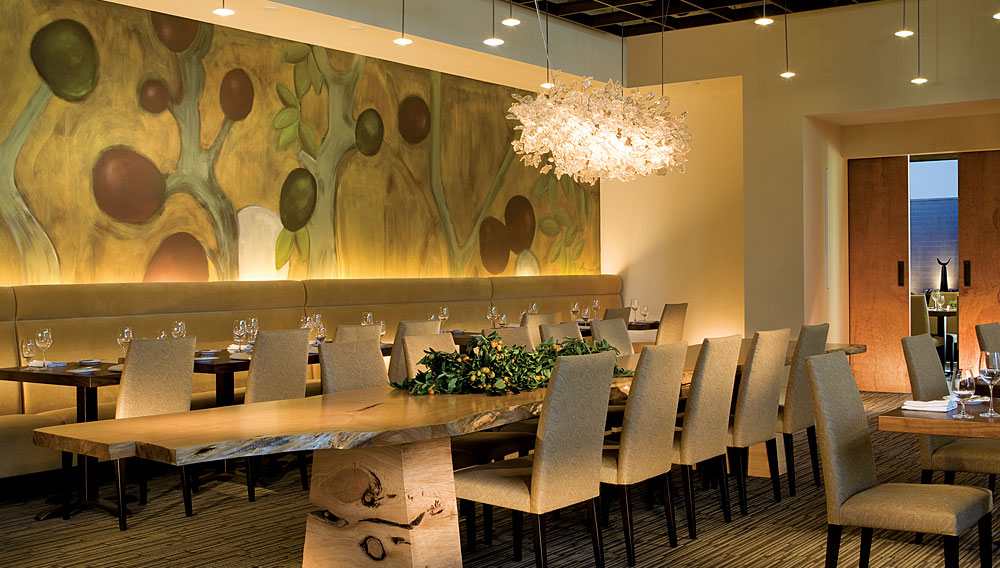 “Simplicity is luxury,” says hotelier Phil Sherburne in describing his vision for Bardessono, a resort and spa in the Napa Valley town of Yountville. This summation is particularly appropriate to the 62-room property not because of its minimalist architecture or Zen-like landscaping, but because of the idea embodied by the serene, flowing complex: that beauty arises from the thoughtful balance of simple elements.

Sherburne, who wanted to set unprecedented environmental standards for a destination of this kind, incorporated into Bardessono’s design reclaimed materials and innovative green technologies. But his philosophy extends beyond the resort’s physical specifications. “Phil wanted to do something authentic,” says Cristina Salas-Porras, the director of guest experience. “Our core values are about building relationships and supporting people that we care about and who care about the earth.”

In no aspect of Bardessono is this oneness with the earth more palpable than in the restaurant, where executive chef Sean O’Toole translates these values into victuals. “We wanted the restaurant, like the architecture, to be about simple materials being elevated,” says Salas-Porras. O’Toole, though eminently qualified, might at first seem an unlikely candidate for this task, having worked throughout his career with such flamboyant culinary virtuosos as Alain Ducasse, Daniel Boulud, and, most recently, Michael Mina. “Sean hasn’t always cooked in places that are down-to-earth,” she notes. “But he’s all about forging personal relationships [with producers] rather than just buying into something because it has a name. We felt that he was someone who could come into a town like Yountville, where there are a lot of important food people, and find his own way.”

Not only has O’Toole established relationships with many of the wine country’s best sustainable and organic farmers, but he has developed in a short time his own straightforward yet flavorful gastronomic vernacular. “With food, it is important that there be a balance,” he says. “Maybe that’s why I was the right fit for this property: It takes a lot of balance to be an eco-friendly resort that’s also high-end.”

O’Toole’s menus contain pure, local expressions of the season. “When we started the original menu, it was winter,” he recalls. “So we aimed for true winter food, like local troll-caught petrale sole from San Francisco Bay with a blanquette, where I take some cream, some hollandaise sauce, and a light, veal-based white sauce and glaze the whole fish.” In spring, his focus shifted to vegetables: “When I think spring, I think artichokes, asparagus, fava beans, and morel and porcini mushrooms.” And with the arrival of summer, the chef’s mood turned Mediterranean. “We do this vegetable pesto, which is simple,” he says. “But when you incorporate these miniature eggplants that I get with some beautiful baby Romanesco zucchini from our farm, it’s summer in a bowl.”

As O’Toole begins to contemplate autumn’s windfall of figs, pears, rutabagas, and duck, which will replace his current ingredients, one recognizes the only flaw in his culinary compositions: their fleeting availability. “People do come back all the time for certain items,” he admits, “and they don’t understand why we would pull them off the menu. We can’t always make everyone happy, but hopefully we can give them something else to make them even happier. Besides,” he adds, “summers are long here in Napa.”