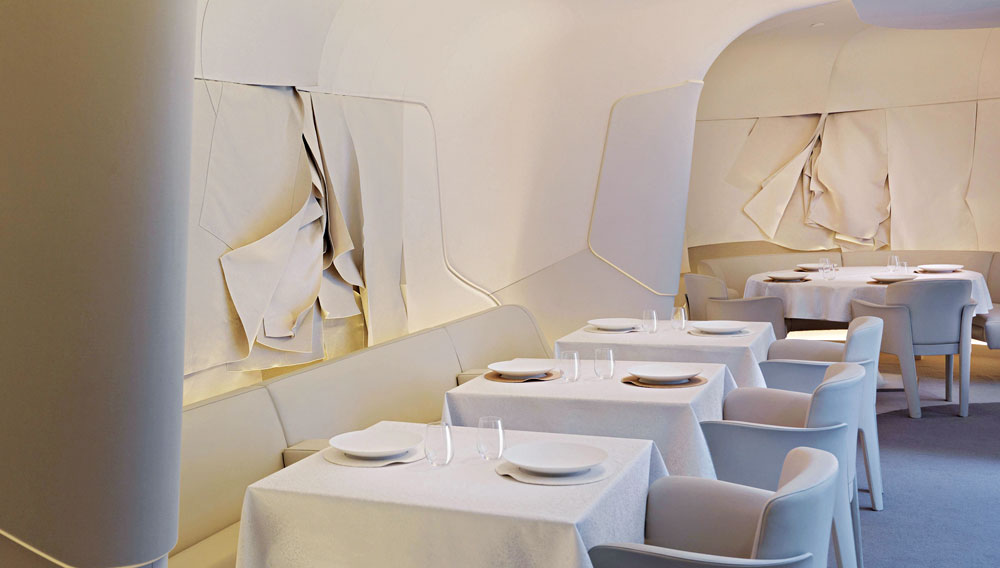 Paris has waited a long time for Thierry Marx. For 10 years he ran the kitchen at Château Cordeillan-Bages in Gironde, where he made a name for himself as one of France’s most progressive chefs. Yet with two Michelin stars and daring dishes like risotto made of soy sprouts, he always seemed a little too big for the countryside. Now, at the helm of the new Mandarin Oriental’s fine-dining restaurant Sur Mesure and its more casual bar, restaurant, and room service, the 49-year-old chef has found a setting that matches his ambition. “Paris,” he says, “is more in line with my creations.”

Marx is definitely ambitious. This, after all, is a man born to working-class Polish immigrants who has gone on to become one of the most recognizable chefs in France (his shaved head, imposing presence, and stint on the French version of Top Chef surely help). While Marx is still working in an avant-garde vein, the element of what the doyenne of French cuisine, Patricia Wells, once referred to as his “wackiness” has receded. Certainly Sur Mesure’s stark, all-white decor, designed by Patrick Jouin and Sanjit Manku, establishes it as a place to be taken seriously (though the bathrooms, with their fringed red walls, suggest an ironic side).

Marx likewise sublimates his wilder inventions to a newly elegant style. Gone are the liquid quiche lorraine and the sweetbread spaghetti, replaced with dishes like oeuf eclaté, or “exploded egg.” The name conjures all sorts of messy possibilities, but in fact, it is a neatly composed riff on the main ingredient: a rich cube of Parmesan custard alongside a cylinder of cooked white enveloping a creamy scramble, and what appears to be a just-cracked raw egg, that all taste of nothing more than rich egginess. That “raw” yolk turns out to be lightly poached, and the white has been cooked at low temperature with a bit of chicken stock, rendering it solid but utterly transparent. In other words, the playfulness of the dish is secondary to its flavor.

The same could be said of most dishes on the 12-course tasting menu ($250). “Peppers deconstructed” is not some weird liquid-nitrogenized reincarnation, but a showcase of the vegetable’s adaptability: pureed into a zippy gazpacho, roasted into a sweet complement to charred beef, and baked into a silky panna cotta. Marx’s Reuben comes from the platonic ideal of delis: Inside the tiny sandwich, veal tongue is swabbed with foie gras and truffles, and all of it is saved from too much richness by a puckery green-apple slaw.

With the exception of the famous soy risotto, all these dishes were developed during the year Marx spent experimenting in his Parisian laboratory prior to opening the new restaurant. “I wanted to break out of my comfort zone,” he explains, referring as much to his desire to invent new recipes (he came up with 400) as to his quest to rethink avant-garde cuisine. Zipping into Sur Mesure’s dining room one Saturday afternoon, the chef chatted briefly with diners finishing off a sophisticated dessert of ylang-ylang meringue, so floral it was almost a perfume, and a smooth, honey-like puree of avocado. The flavors were decidedly unexpected, but the dessert hit all the satisfying notes: sweet, creamy, and luscious. “You see?” Marx said emphatically. “There’s no conflict between tradition and innovation.”