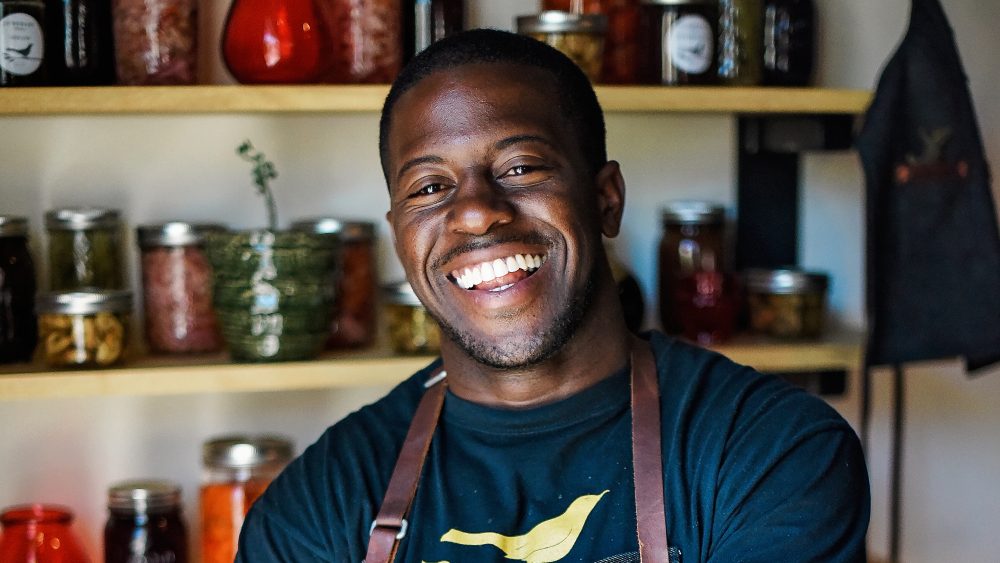 When Edouardo Jordan took the stage at the 2018 James Beard Awards, he made history. The chef-owner of Salare and JuneBaby in Seattle had already collected the prize for best chef in the Northwest at the “Oscars of food.” Standing in front of the culinary world’s biggest stars for the second time, he became the first African-American to win Best New Restaurant in the award’s history. Returning to Seattle, he didn’t allow himself to bask for too long. Within six months he opened yet another establishment, cementing his mini-empire in the Pacific Northwest.

His route to that part of the country was circuitous, and by the time he opened Salare in 2015, he was able to unite cultures and techniques from his stops along the way, including Thomas Keller’s French Laundry and Per Se, Seattle’s Herbfarm and a stint in Italy studying meat curing with a salumist. He then returned to Seattle where, with loans, a little family money and a Kickstarter, he created Salare and earned acclaim by combining his love of Italian fare with his French culinary training.

When a space opened up down the street, JuneBaby was born. Feeling that Southern food had become gentrified, the Florida native got back to the cuisine’s African-American roots. “There was no one of color truly talking about the food from their perspective,” he says. Jordan didn’t want fancy chef versions of Southern fare. Instead, he created simple interpretations with top-quality ingredients, presented humbly. He didn’t shy away from pig intestines or feel the need to overcomplicate a bowl of peas and rice. And he stopped worrying about being pigeonholed for cooking soul food.

“I didn’t want to become just that black Southern chef—that’s why Salare came first,” Jordan says. “JuneBaby speaks to who I am as an individual soul and as an African-American male from a food standpoint.”

Lucinda Grain Bar, which debuted in December on the same sleepy Seattle street, is devoted to grain—bowls with barley, bread baked with einkorn wheat, local beers brewed with millet. He’s trying to open Seattleites’ eyes to the grains that grow in abundance in Washington. “It’s like hogs in Iowa or citrus in Florida— they’re the cash crops of the Pacific Northwest,” Jordan says. “Some people here never even heard of einkorn. So when they taste it, they’re like, ‘Oh man, this is beautiful, nutty and sweet.’”

What’s next for Jordan probably won’t be another restaurant. Since he already makes so many ingredients—from pickles to pimento cheese—in-house, now he’s looking to create a line of products to sell inside his restaurants. And further down the road, he’s hoping to found a charity that builds on the childhood literacy work he’s already doing. For now, though, despite his meteoric rise, he’s going to keep grinding. “I’m still the chef and owner who’s fixing plumbing, painting walls, writing menus, working on the line and doing the things that made me who I am,” he says. “But we’re busier, more people are dropping their resumes off, I’ve gotten to travel to see things I thought I’d never see in my life, and when I make a phone call, people listen.”